The first week of each month is when the most influential economic reports are released. That party got started today with another impressive ISM Manufacturing announcement rising to 61.2, says Steve Reitmeister, editor of Reitmeister Total Return.

Even more exciting was the 67.0 reading for New Orders, which means we should expect more strength ahead.

Next up is ISM Services on Thursday followed by Government Employment Situation on Friday. The outcome for these reports could be the necessary clues telling us whether we will be stuck under 4,200 a while longer. Or if a breakout above is about to unfold. 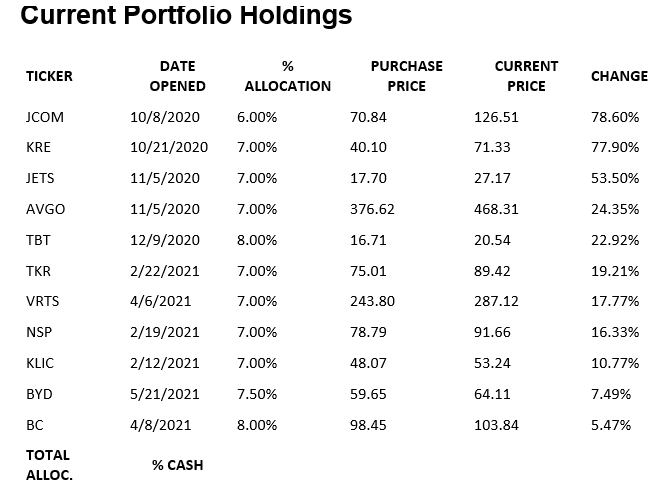 We will discuss all that and more in this week's commentary.

After a few weeks consolidating we wonder whether the volatility will continue or if we are indeed ready for that next leg higher. I previously stated the following:

“The possibility of a stiffer correction creating a nice buy the dip opportunity. That is still possible. However, another idea emerging id that this may just be an extended trading range with violent sector rotation. Or what some folks call a “rolling correction”.

This is a scenario where the overall S&P 500 doesn’t move that far under 4,200. Yet group by group they see 10-20% sell offs as noted for Consumer Discretionary and Tech above. Now that idea rolls out to all groups 1 by 1. So, in the end, each has been cleaned of excesses and ready for the next bull run higher.

If this is indeed what is unfolding, then we will deploy our remaining cash into the best stocks in groups getting beaten and battered to enjoy more upside when they are ready to bounce higher. Still have some pretty attractive targets on my radar and will strike when odds look favorable.”

Indeed the needle for the S&P 500 was stuck on 4,200 with a basically breakeven session. Yet there was plenty of sector rotation taking place as is evident with healthcare getting slammed with consumer defensive, utilities and technology also in the red.

(Aside: Isn’t that interesting though? 3 of those 4 groups are considered defensive sectors. Yet technology is usually lumped into the Risk On or growth category. But when you think about the FAANG stocks they are in many ways the defensive plays folks cling to when the going is rough. That is why it is truly not shocking they aligned themselves with the conservative picks today.)

On the flipside economically sensitive groups like energy and basic materials led to parade higher today. Plus, small caps had a strong session with the Russell 2000 up 1.14%.

This sounds like very bullish fuel on the surface that could lead to the eventual breakout above 4,200. But that is the trickery of the sector rotation at play because tomorrow things could be 180 degrees in the other direction. Meaning we could be battling over 4,200 a good while longer.

This gets us back to the notion of putting our cash back to play not on some big dip for the overall market. Instead, it is about buying the targeted dips in the best looking stocks whenever their time to dip has occurred. Indeed, I am getting a little bit of an itchy trigger finger and likely to make my next move sometime this week.

Back to the overall market outlook. The ISM Manufacturing report today was very strong. That coincides with strength across many recent reports including last week’s Jobless Claims report moving to a new post-Coronavirus low of 406,000.

Yes that is well above the low 200K readings pre-Covid. But on a trajectory basis we are on the right path. This also bodes well for what we should see this coming Friday with the monthly Government Employment Situation announcement.

Right now expectations call for 635,000 jobs added in the month of May. That would be a quantum leap from the 218K additions last month and maybe get the unemployment rate under 6%.

Let’s pull back to the big picture. It has been several months since there was truly a bad economic report. This makes sense as the economy was already self-healing from the Coronavirus inspired recession. And that is the normal picture at the early stages of a new economic expansion.

And on top of that the Fed is spending $120 billion a month on Treasuries and mortgage securities to keep rates as low as possible. This trend of low rates, as we have discussed many times before, is the biggest tailwind behind the current bull market.

Putting all the pieces together we are no doubt in the midst of a bull market. BUT the easy money from bottom has already been made with the 100% gain for the S&P since the March 2020 lows.

Now we should expect a more tepid pace of returns. And more bull runs followed by extended pullbacks or corrections or sector rotations. Or simply, more volatility.

If you know that in advance, then all the easier to handle it as it rolls your way. Now let’s press on with a discussion of the individual positions in the Reitmeister Total Return portfolio...

The sector rotation swung back in our direction in a BIG way this week. Whereas the S&P only generated a modest +0.33% return since last Tuesday, our portfolio actually plowed ahead +2.88%.

Now here are some additional insights on our individual picks:

Boyd Gaming (BYD): Shares were already impressive out of the gate as we bought on the ill-advised dip under $60. However, the top analyst at Stifel got behind shares last Thursday with a fresh $82 target leading to another 2.7% gain in shares. Off to a good start here with plenty more upside potential packed into shares.

Brunswick (BC): Extra shares of BC were purchased on the same day as BYD as they shockingly broke below $100. These shares took a couple beats longer to catch the rhythm like BYD...yet gladly did in time.

Note that it seems this entire discretionary groups saw a pretty rough round of profit taking. That includes a bludgeoning of our former position Thor Industries (THO). In a way it makes sense as this group has been a strong outperformer for a while. There were ample profits to take off the table. Yet as the smoke clears from that move and we look forward, it is hard not to appreciate the attractive growth at an attractive price story. That is why I was happy to have added on the dip and ready for what lies ahead.

Timken (TKR): The sector rotation swung back nicely to materials and industrials putting some wind behind Timken’s sails. Might see a spot of resistance at $90...but no good reason to think about taking any profit til closer to $100.

Broadcom (AVGO): The 5 Star analyst at Oppenheimer is sick and tired of the tech sell off for names like AVGO. Therefore, he proudly jumped to the head of the pack with a street high $575 target. That may seem aggressive at this time but really just 20% above current prices in a world of serious semiconductor growth and pricing power which leads to higher profits. This is good soil for higher share prices and tells you why I hung on through the recent round of profit taking on the group for the gains that should lie ahead. (Same could be said for our other semiconductor play KLIC).

Virtus Investment Partners (VRTS): A very shallow and short lived correction so far = higher AUM fees than expected for money managers like VRTS = the reason behind the continued outperformance. Yet even as we approach 20% gains to date still think that 2-3X that lies ahead this year alone.

Regional Banking ETF (KRE): In the April members only webinar I teased that I might be interested in taking profits on KRE. Not because it was no longer a solid investment. Just that it’s run of outperformance was coming to an end and maybe a good time to bag the gains. Gladly I waited a few beats longer and that was certainly the right move as shares are up an additional +6.5% since then which is more than double the S&P’s return in that stretch.

Yes, at this stage I am still pondering selling shares, but these recent gains for KRE came while bond rates actually went sideways. I may push my luck to see how it does on the eventual move to 2% Treasury rates.

This is another case of where investing is neither black nor white. We have to deal with many shades of gray. And so, the solution may be to sell some in the near future and keep a smaller allocation on hand. So stay tuned and stay flexible.