The wall of worry is so high now that it seems insurmountable. But is it, asks Joe Duarte of In the Money Options.

If the world is about to end, then why would money be pouring into mutual funds to the tune of $68 billion as algos buy call options?

Now, let’s look at that wall of worry:

In fact, it’s fair to say that if any one or more of these potential issues goes south it could be the proverbial death knell for the longest bull market in history and what could be an implosion in the MELA system composed of the Markets, the Economy, people’s life decisions, and the Algos.

So why are people pouring money into stock funds? Well, it could be that we are seeing the bag holders getting suckered at the top. Or there could be a whole other side to this as the options market is starting to turn more bullish, which is a sign that the algos are loading up on stocks on the cheap as they prepare to wind up yet another up leg. See options summary below for details.

And yes, as can always happen, traders may be right or wrong—so this could indeed be the top of tops.  Still, from a structural standpoint, when traders become bullish on options it forces the algos to hedge in a way that drives prices higher, which means that even though the bearish case is worth exploring and should be thoroughly understood, as I describe in the next section, what matters most is what the market is doing.

Moreover, the big Wookie in the room for the markets is the Fed, which meets on 9/21/21. The consensus is that the central bank will continue to push toward a taper. But can they really taper when there are so many things that can go wrong? Does the Fed want to be blamed for a global economic collapse?

Thus, even though stocks ended badly last week, what matters most is what happens next week. So here are some sound trading principles:

So here is the bottom line. There is no certainty that the Fed will taper, unless of course these guys are the dumbest central bankers in history. You decide on that one. But if it turns out that Fed is all talk and they back off from the taper talk, this market selloff is yet another algo fake out and we can all become more aggressive on the long side in the not-too-distant future.

Do we rush out and buy, buy, buy? Not yet. But in my opinion, it would be foolish to be completely bearish at this point.

On Semiconductors Rumbles Within Bullish Pattern

I recently recommended purchasing shares of chipmaker On Semiconductors (ON) and the stock has turned on the afterburners as investors recognize both value and upside momentum in a market that requires precise stock picking. 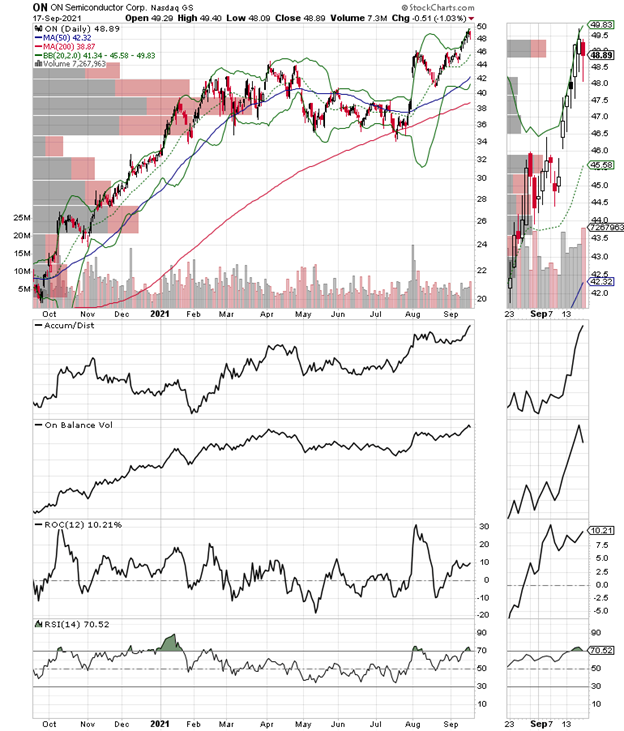 It’s a pretty straightforward dynamic here. ON cites “robust demand across” all of its markets, especially automotive and industrial. And that says a great deal about the current state of the global economy where the potential for success is more about a company’s niche than the economic background.

But here is where smart management comes in. ON has negotiated long-term supply agreements (LTSA) with a large portion of its customer base, in effect nearly guaranteeing a steady income stream. This in turn delivered record margins and results in its most recent quarter as well the all-important “sustainable improvements” mention regarding its margins.

In other words, ON is flexing its manufacturing muscles to establish a long term income stream in a market where semiconductor shortages are forecast to last for the foreseeable future. And that in turn will likely fuel a continuation in the good fortunes for the company, which is highly invested in chip production for the growing electric-vehicle market. Moreover, its second largest market, defense and aerospace is likely to remain steady at worst given the rise in geopolitical tensions of late.

Accumulation Distribution (ADI) and On-Balance Volume (OBV) are bullish at the moment. And although the stock is slightly overbought, a consolidation above the $45-$46 area may provide an excellent entry point once it appears. There was plenty of buying on the dip on 9/17/21. Indeed, a move toward the mid 50’s is well within reach within the next few weeks barring a major market meltdown.

I own shares in ON as of this writing.

Over the last few weeks, I’ve documented the bearish case in the options market. Specifically, I’ve detailed the fact that put buyers have been very active just below the active strike price for SPY options. For example, if SPY has been trading at 450 put buyers have been increasing their activity at 449. The net effect has been the presence of a downward bias to prices as put buying by the public requires put selling by market makers (algos) and put selling requires hedging via stock and stock index future sales.

Well interestingly, this pattern may be reversing. And it became more noticeable on the 9/15/21 weekly SPY expirations, although it did reverse slightly on 9/17/21 where the call buyers persisted above 445 but the put buyers came in at lower strike prices.

The bottom line is that something seems to be shifting in the options market. What it means is not clear just yet. But it could be bullish.

Market Breadth: NYAD Fails at 50-day MA as Sell Signal Digs In. But…

The charts look ugly. But as I noted above, the bearish case may not be fully baked into this market as key indicators were mixed.

The New York Stock Exchange Advance Decline line (NYAD), the most accurate indicator of the stock market’s trend since 2016, continues to forecast lower prices for stocks. Last week, NYAD failed in its attempt to cross above its 50-day moving average, while remaining below 50 on RSI, a very negative set of developments and an outright Duarte 50-50 sell signal. 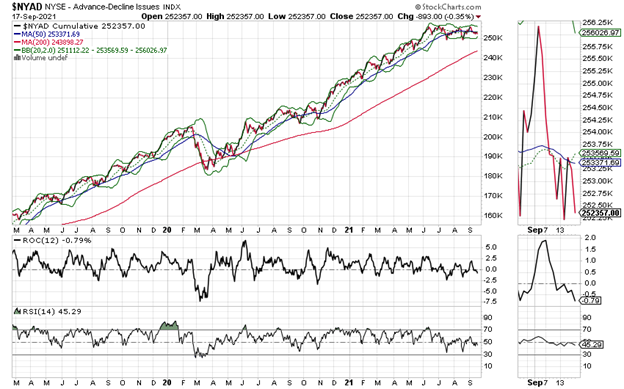 And yes, the Sell Signal is still reversible with one or two strong days as long as NYAD makes a new high. But the longer it takes for a meaningful reversal, the worse it will get for stocks. 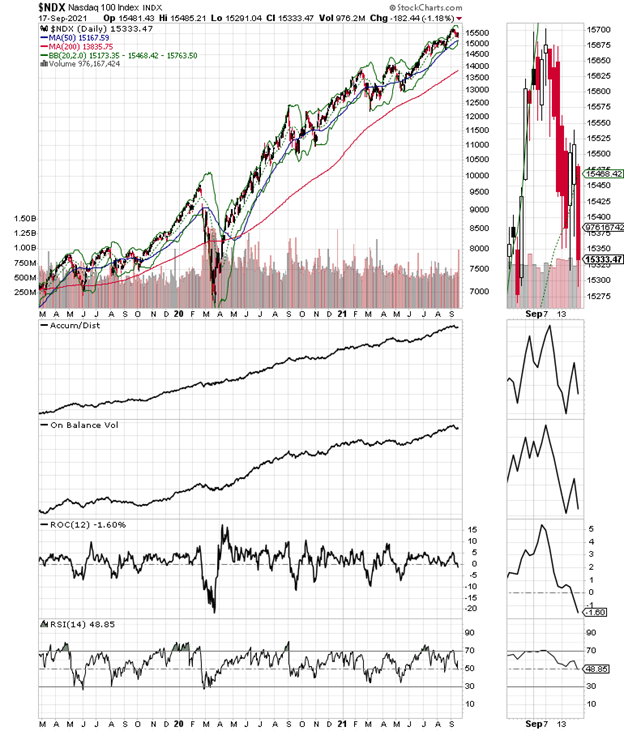 The Nasdaq 100 index (NDX) cut through its 20-day moving average and remained below the 50 area on RSI but neither Accumulation Distribution (ADI) and On-Balance Volume (OBV) made new lows.

Meanwhile, the S&P 500 (SPX) fared worse than NDX as it broke through key support, its 50-day moving average as well as making new lows on Accumulation Distribution (ADI) and On-Balance Volume (OBV).