Real Estate (XLRE) and Health Care (XLV) were the strongest sectors, while Consumer Staples (XLP) and Communications (XLC) were the weakest.

Weekly market breadth was positive for both the NYSE and Nasdaq. The New York Stock Exchange Index (NYSE) had 2033 advances and 1443 declines. Nasdaq had 2572 advances and 2318 declines.

I would like to see an improvement in weekly Nasdaq breadth with more participation in small and mid-cap stocks showing leadership.

10-Year US Treasury yields rose last week, closing at 1.655%, after hitting a high of 1.704%, the highest level since April (Figure 1). Support is between 1.45% and 1.50%. Watch the speed of rising yields. New highs in yields in the immediate future would be concerning. If yields stop rising and retrace for a few weeks, that could add fuel to the advance. 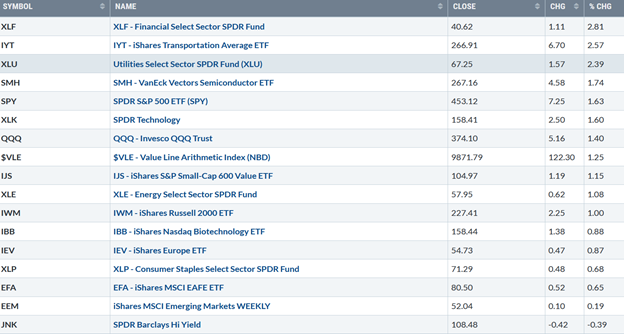 Financials (XLF) were strong, leading the way with Transports (IYT), which had its second week of big gains after the previous week’s breakout. It’s a little concerning that high-yield bonds were down last week as equities moved higher. The international sector is lagging behind the US market.

On 3/25/21, the NYSE new lows peaked at 207 (orange circle) and immediately contracted (purple rectangle), followed by a jump to 95 on 5/11. New lows then contracted from May to 7/19, before rising to 96 (orange circle), peaking at 118 (green circle) on 8/19, then declined. Watching new lows on the New York Stock Exchange is a simple technical tool that helps awareness about the immediate trend's direction. 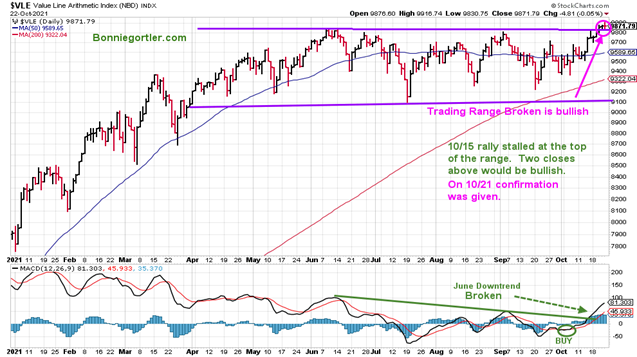 The Value Line Arithmetic Average is a broad index, a mix of approximately 1,700 stocks. The Value Line Arithmetic Average stalled at the upper channel of its trading range on 10/15. Price appears to have broken out to the upside after two closes above 9837.42 (pink circle) at the top of its trading range. MACD confirmed the price, rising through the June downtrend, gaining momentum, implying more gains ahead.

The Daily Nasdaq AD-Line peaked in June (red circle) and has trended down (purple line). The June downtrend was broken (green circle). It would be positive there will be further follow-through in Nasdaq in the short term. If the AD-Line turns up again and makes a higher high than the September highs (blue circles), implying more stocks are participating, confirming the rally is sustainable. On the other hand, it would be negative if the AD-Line breaks below the uptrend from August (orange arrow) in the short term.

New highs trended lower from February through July, the peak reading of 708 set on 2/8 (purple circle). It’s encouraging, New highs have expanded on the latest rally, closing at 216 on 10/22/21, the most since June. Watch early in the week if new highs continue to expand, above the 5/10 high of 332. It will be favorable if new highs increase consistently, having more new highs than lows over the next few weeks. On the other hand, if they contract now and there are more new lows than new highs, then a warning would be given that the rally is losing steam and likely to fizzle. 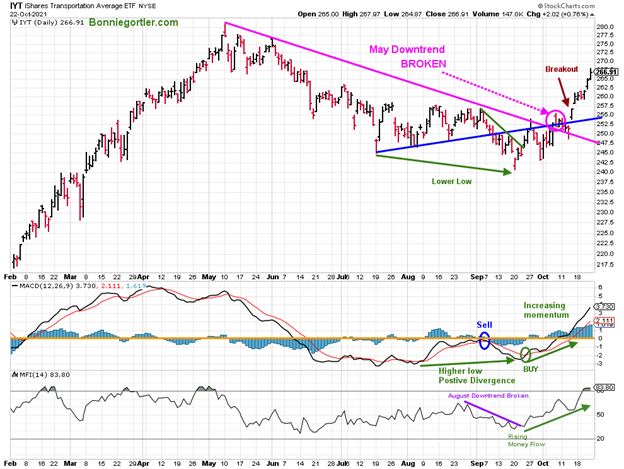 IYT closed at 266.91, up 2.57% closing after gaining +2.11% the previous week. The Transports broke the May downtrend (pink line), successfully testing its September low. MACD (middle chart) remains on a timely buy with increasing upside momentum, implying a test of the May highs.

IYT closed above the first resistance of 262.50, with the following targets 267.50 and 275.00. Support is 265.00, 260.00, followed by 254.00. Money Flow (lower graph) gave a clue the advance would accelerate, rising sharply since late September fueling the upside breakout. Money flow is extended and could pull back the next few days as IYT consolidates before another rally. 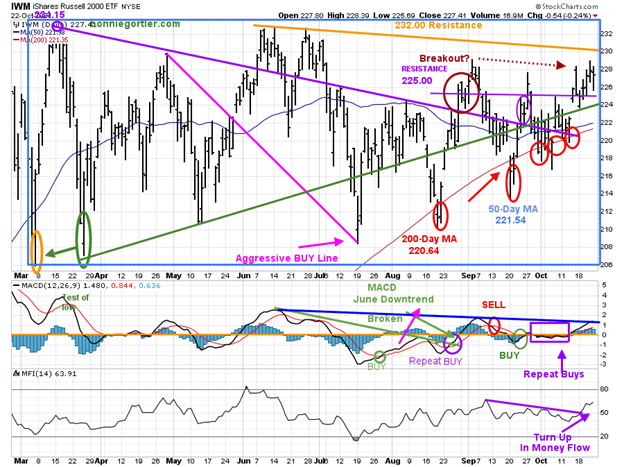 The top portion of the chart is the daily iShares Russell 2000 Index ETF (IWM), the benchmark for small-cap stocks, with a 50-day moving average (MA) (blue line) and 200-day moving average (MA), that traders watch and use to define trends. IWM made a low on 3/5, then peaked at 234.15 (purple circle), followed by declines to test the March lows and the March high, remaining in a trading range (blue rectangle).

I’m encouraged that there was no penetration of the 200-day moving average (red circles). IWM closed at 227.41, near its high of the week. However, IWM remains in its range under 232.00 resistance. The middle chart is MACD (12, 26, 9), a measure of momentum.  After breaking the early June downtrend, (green line), MACD gave repeat buys in August, September, and October as price stayed in the trading range.

Last week in the 10/15 Market Wealth Update, I stated:

I remain optimistic that MACD will break the June downtrend, and IWM will penetrate the old high and rise towards 238.00. Support is at 224.00, followed by 218.00. The weekly chart (not shown) support remains at 210.00. A weekly close below 210.00 would negate my positive outlook and give lower downside objectives. 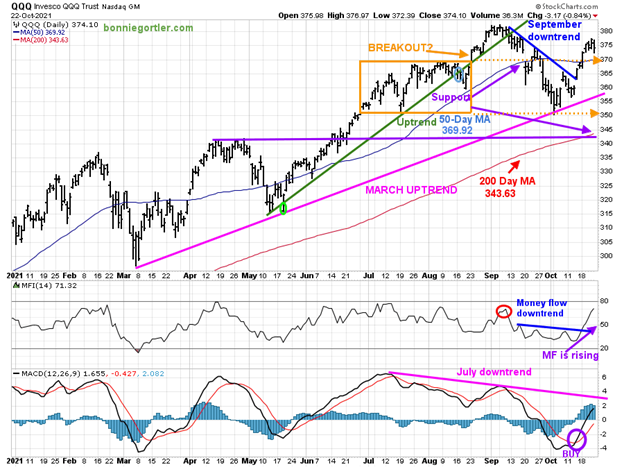 The chart shows the daily Invesco QQQ, an exchange-traded fund based on the Nasdaq 100 Index with its 50-day moving average and 200-day moving average. The March uptrend (top chart) remains intact (pink line). In June, QQQ was in a trading range (orange rectangle) and then broke out above 370.00 in August, which failed. A decline followed to support at 350.00 in late September. After breaking the short-term downtrend from 10/7 (blue line), QQQ has been rising. QQQ gained up 1.40%, closing at 374.10. Resistance is 380.00 with an upside objective at 390.00.

Money flow peaked in mid-September (red circle) and then trended down. Money flow has been rising (purple arrow) since breaking the September downtrend (blue line), implying that investors have started rotating into growth stocks. The lower chart is MACD (12, 26, 9), a measure of momentum. MACD gave a timely buy signal, a rising double bottom from an oversold condition where sustainable rallies begin. So far, so good. Its bullish MACD is rising and now threatening to break the July downtrend. Support is at 370.00 followed by 355.00 and 340.00 (purple line).  A close below 340.00 would negate my optimistic outlook. 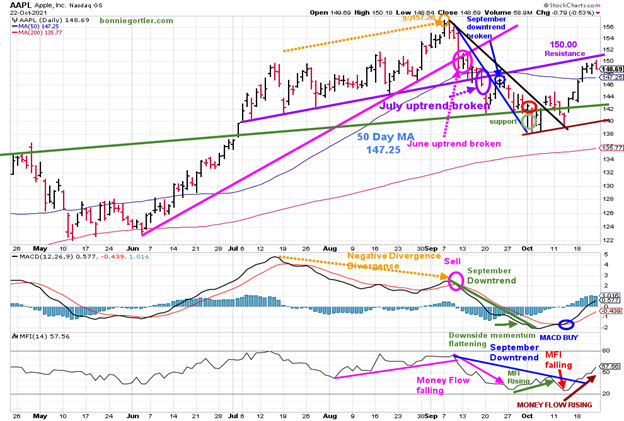 Apple (AAPL) peaked on 9/7/21 at 157.26 (orange circle). AAPL then declined to fall below its June uptrend (pink circle) and below its 50-day moving average in September (purple circle). It’s positive that last week AAPL closed above its 50-day MA for the first time since September. AAPL continues its better tape action gaining 2.66%, closing at 148.69 near its high of the week, MACD (middle chart) is on a buy (blue circle) with rising money flow (lower chart, brown arrow). 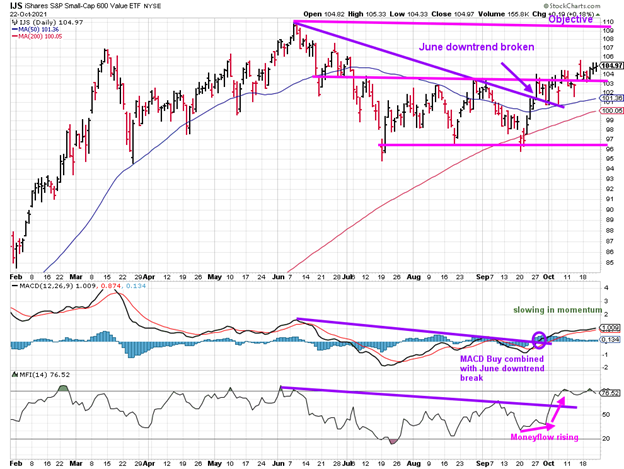 The iShares S&P Small-Cap 600 Value ETF (IJS) tracks an index of small-cap US stocks that provides exposure to the US small-cap companies that are considered undervalued by the market relative to other companies. The top sectors are Financials Consumer Cyclicals and Industrials.

IJS rose +1.15%, its highest level since June, closing above the mid-channel. MACD is on a buy after breaking the June downtrend but has no acceleration in momentum. Money flow remains strong, although it has flattened. I remain confident IJS will continue to rise toward the upper channel. Watch the direction of Semiconductors for a continuation of the rally. 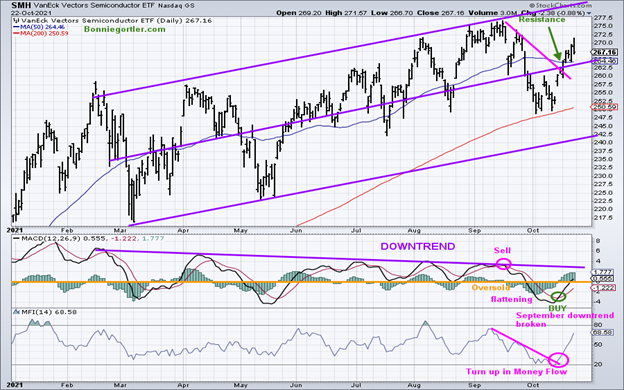 SMH is a leading indicator of the technology sector. In the previous weeks' update, I wrote for a sustainable rally, Semiconductors (SMH) need to:

All of the above criteria occurred last week. SMH rose 1.74%.

MACD (middle chart) remains on a buy, combined with money flow rising sharply, breaking the September downtrend. This week it would be bullish if SMH continues to lead and break the February downtrend. 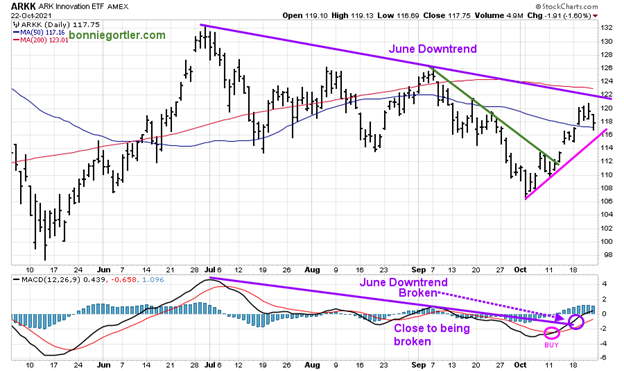 ARK Innovation ETF (ARKK) is an actively managed ETF by Cathie Wood that seeks long-term growth. ARKK has broken its September short-term downtrend (green line). Now, the key is to watch if ARKK can break the June price downtrend or if it stalls and turns down, breaking the October uptrend (pink line). MACD is on a buy. MACD broke the June downtrend, which is positive. As long as ARKK closes above 114.00, the bulls will remain in control.

Watch if SPDR S&P 500 (SPY) can penetrate the upper channel. 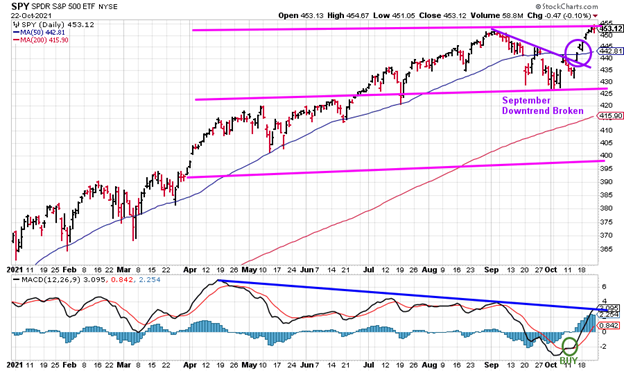 The S&P 500, with approximately 500 large companies, is close to giving new upside objectives to 480.00. SPY broke the September downtrend. MACD is on a buy. Two closes above the upper channel and MACD breaking the April downtrend would confirm more gains.

The technical picture improved substantially last week, with the Transports and Semiconductors leading the broad market higher. Market breadth is improving, including the NYSE AD line making a new high. November and December, a historical seasonally strong time of the year, is ahead. The Russell 2000 is one of the few indices that remains in a trading range, but the odds favor a breakout to the upside will occur. A big week of earnings includes Apple, Microsoft, Amazon, Google, Facebook, Mastercard, Visa, and more. Inflation worries and rising interest rates remain. For now, continue to give the benefit of the doubt to the bulls.