Market Getting Skittish as Fourth Turning Upon Us

How many remember the old Get Smart television series with Agent 86, asks Jeff Greenblatt of Lucas Wave International?

Maxwell Smart would get out of another jam, turn to the camera, and tell the audience they, “missed it by that much.” The same can be said for Bitcoin, but not in the way investors hoped. Last week I made a point to tell you whomever would trade a pattern like that was early and aggressive, it's not a trade for everyone. For Bitcoin to sustain a bounce into a rally, it needed to move higher beyond the 67% vibrational retracement.

It missed it by that much.

Now its back in the soup largely because the crowd now fears the events starting to manifest in Ukraine. Next week, psychology might be on to something else. That’s not all a potential larger skirmish could interrupt. Any conflict will not be a friend to the American consumer as inflation continues to roar. Gas prices in California are now over $6 per gallon in a place where drivers struggle once the price is over $4. Sanctions could have the unintended consequence of throwing more gas on the inflation fire.

If that were the only problem. You’ve been following the events up in Canada, now the US is getting ready for its own trucker convoy. I want to talk about how geopolitical risk could impact the market. With Russia, you already see it, the market is not looking forward to a major conflict. But this is the Fourth Turning and we could be coming into the teeth of the brewing storm. The market has been decent considering how it’s been propped up at least since the start of Covid. But how many realize the impact of war on a market? I went to the archives and pulled up a map of the Dow (DIJ) during WWII. 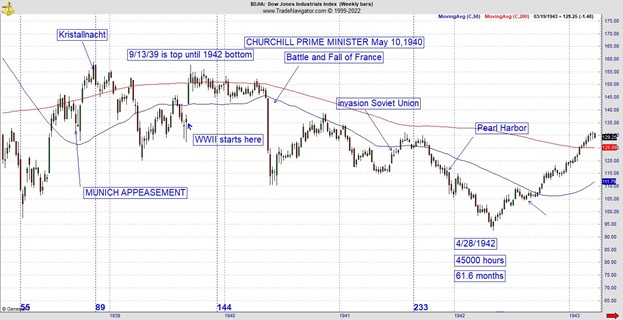 From the high in 1937 (Roosevelt’s Keynesian 30’s rally) to the low in 1942, it was 61 months. But you can see it was mostly down and I can tell you by the low in May 1942 the Germans had maxed out their industrial capacity to wage war and the US was barely at 25% of our capability in the “Arsenal of Democracy.”

The moral to the story is the 30s market was hanging on, it was off its high, but Kristallnacht happened and that was the end of the market’s capacity to rally for the next three years. Sometimes it takes a war to take out a rally. Let’s be clear, there is a different kind of war going on in Canada where Trudeau invoked the Canadian version of the Insurrection Act and stories have leaked out that not only the truckers but those who legally contributed to the trucker’s fund are having their bank accounts frozen. This is not fake news. On Wednesday, numerous sources including the Wall Street Journal stated Canada has begun to unfreeze these accounts.

So, I’m here to tell you the public’s trust of the banking system is paramount to the sustainability of the financial system, especially in a fractional reserve system. There is always going to be unintended consequences to the actions of politicians. Perhaps they figured out the world is not ready for their brand of the Great Reset, and they are in the process of walking it back.

It's the Fourth Turning, these kinds of historic confrontations are to be expected. You know, it was always going to come to this. But all you need to do is look at the charts to see what kind of trouble we are facing. In terms of the technical the S&P 500 (SPX) breached the 200-day moving average last Thursday for the second time. Not shown is the weekly, where the 50-week moving average was also breached for the first time since the drop in 2020. 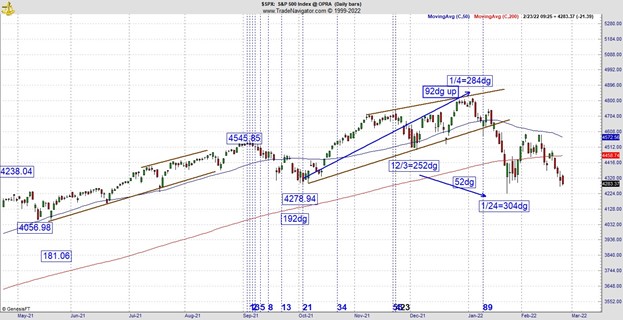 There are several very good 52 and 92 vibrations which have validated. For those who are new, these vibrations work similarly to Andrews pitchforks. You know you’ve drawn the right channel lines when they validate because when they validate, they’ll do it some more. In this case the recent low was 52dg on the Gann calendar down the road from the 252dg day, which was the kickoff to the last rally to the top.

This low is now being tested and if it breaks, it could open a door bulls would not like to see opened. You don’t have to understand Gann vibrations to realize one violation of the 200dma is not good, but it happens. Another breach days later is certainly not good.

Does that mean a bear market is coming? You can’t rule it out. Will this market come right to the ledge and back off like most bull markets? Nobody can answer these questions, but this is what risk is all about. Markets are hinting at bigger trouble and one doesn’t need to know about the Fourth Turning to see it. But you will be way ahead of the game if you understand the risk that is unfolding this year.

Finally, the Bitcoin (BTC) chart. Last week’s near-term buy accounted for 3,205 points but it failed to make a new high. The pattern is currently drifting lower and looks slightly more bearish than bullish, but for now it certainly is not doing what the vast majority of crypto players want to see. This chart is still a case of unrequited love. It failed when it was in a position to take off. The price action still does not erase my doubts that a sustainable rally is still possible. The current low on Monday is questionable and I wouldn’t be surprised to see it tested or violated. 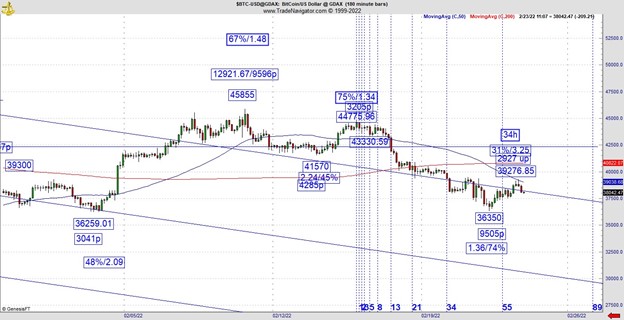 Overall, this is an environment we haven’t faced before. The challenge to traders is to continue to engage the market while at the same time accepting geopolitical risk is going to be the new normal for the rest of this year. You deal with it by having a superior trading methodology where you know what your edge is and be able to recognize it when it appears. That way, you’ll be able to follow Larry Pesavento’s great advice by only trading what you see right in front of you.