The Week of New Lows

The downtrend continues to start in May, notes Bonnie Gortler of bonniegortler.com.

For the week, five of the eleven S&P SPDR sectors were up, Energy (XLE), the star performer in 2022, and Utilities (XLU) were the strongest, while Consumer Discretionary (XLC) and Real Estate (XLRE) were weakest. The SPDR S&P 500 ETF Trust (SPY) was down -0.60 %.

Despite the S&P 500 (SPX) only down -0.6%, the decline was broad. Last week was high intraday volatility. Market sentiment shows fear, with the CNBC Fear and Greed Index (a contrary indicator) closing at 31 in the fear zone. The AAII sentiment survey continues to show pessimism above its historical average. 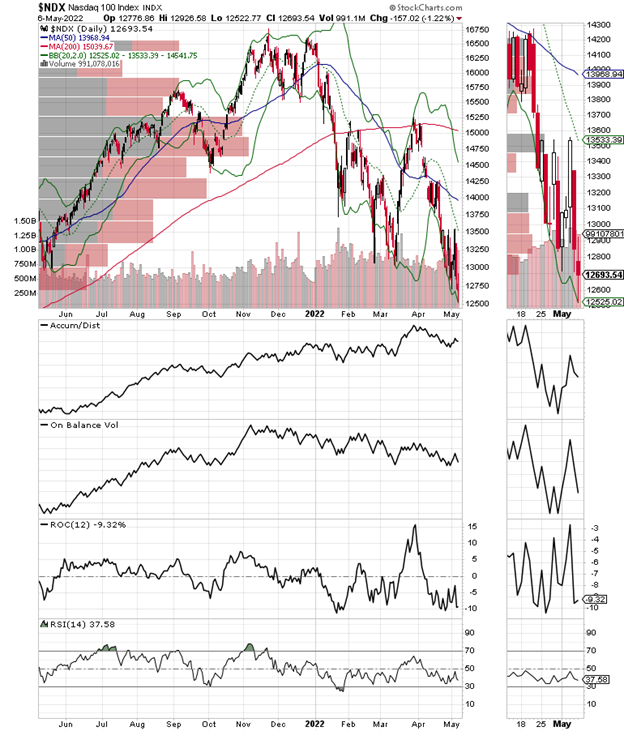 The daily Nasdaq advance-decline line peaked in February 2021 and continues to make lower lows. Market breadth remains negative. Until this changes, it will continue to be more of a challenge to make money from the long side.

Risk management with a focus on Safety and Capital Preservation remains a priority. For a major market bottom to occur, improved market breadth is needed. Keep a close eye for several days of more advances than declines, with new lows contracting below 150 for the first sign of a potential upside reversal.

Last week, VIX fell to 30.19 (purple circle), remaining below the March and April peak. Expect more day-to-day volatility until VIX closes at a minimum below 24.00 and below the 4/01 April low (orange circle) at 19.63.

If you are day trading, adjust your size of trades to be smaller and keep tight stops if the decline continues to accelerate lower to manage your risk.

Watching new lows on the New York Stock Exchange is a simple technical tool that helps awareness of the immediate trend's direction. New lows warned of a potential sharp pullback, high volatility, and "panic selling" for most of 2022, closing above 150.

Here is an excerpt from my book: "When new lows are above 150, the market is negative, higher risk, and selling is taking place. Sometimes it could be severe, and sometimes on a very nasty day, you can have 'panic selling,' and big wild swings (high volatility) to the downside may occur."

As the market started to move lower in January, new lows rose sharply, peaking at 792 on 1/24 (red circle), and then contracted but not enough to be in a low-risk zone before rising again on 2/24 at 792, matching the 1/24 peak. In March, things were looking better as new lows fell below 150, and a rally began, but it was short-lived.

Last week, new lows expanded from the previous week closing at 616 on 5/7 (brown circle), but less than on 5/2 reading of 628 (pink circle), a promising sign. Risk remains of further downside in the near term until new lows contract to below 150 and then fall between 25 and 50. 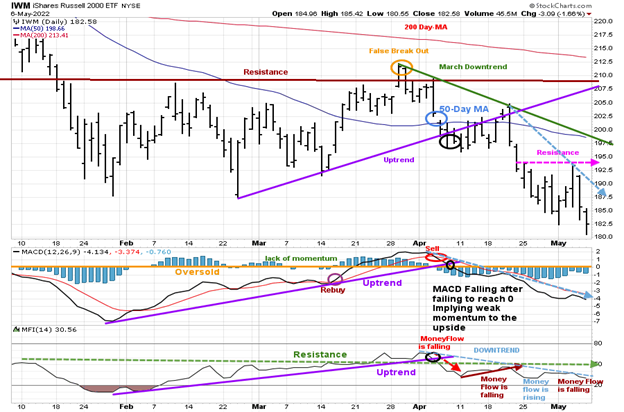 MACD (middle chart) remains on a sell, below zero, falling with downside momentum continuing. Money Flow (lower chart) turned up and is close to breaking the April downtrend.

Note: IWM for the intermediate-term stalled under resistance at 210.00, and MACD remains in a downtrend. Nasdaq remains weak, continuing its short-term downtrend. 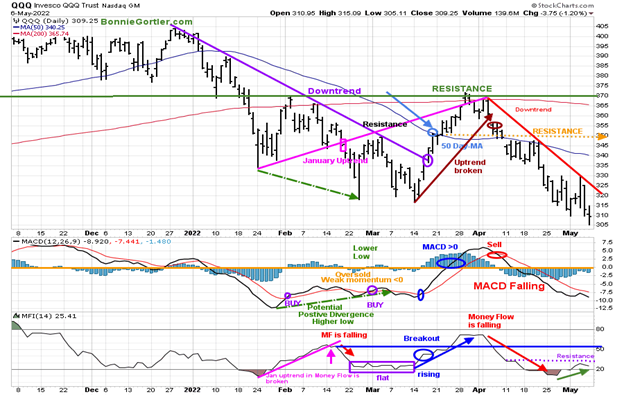 The chart shows the daily Invesco QQQ Trust (QQQ), an exchange-traded fund based on the Nasdaq 100 Index with its 50 and 200-Day Moving Average. QQQ accelerated lower after breaking the January uptrend (pink rectangle), penetrating the January lows.

The middle chart is MACD (12, 26, 9), a measure of momentum that remains on a sell, oversold below zero and falling. Money Flow (lower chart) trended lower in April but has turned up from an oversold condition. However, so far unable to get above resistance (purple dotted line). 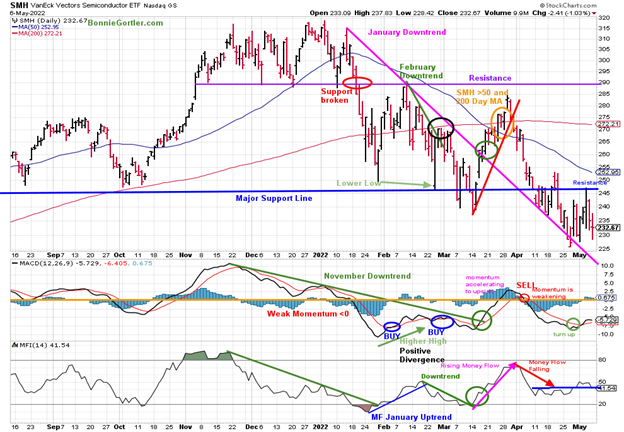 In late January, Van Eck Semiconductors (SMH) support was broken (red circle) and then fell sharply but held the October 2021 lows. SMH then rallied but turned down again, closing below support at 240.00 on 3/14/22, a false breakdown. SMH broke the March uptrend (red line) after failing to get above resistance and fell for five consecutive weeks. SMH this week was positive, gaining +1.23 %, closing at 232.67. However, it still has work to do since it remains below its 50 and 200-Day Moving Averages.

Support is at 220.00, and resistance remains at 245.00, followed by 255.00. MACD (middle chart) is now on a buy (green circle) but not yet accelerating higher or above zero, showing internal strength.

Money Flow (lower chart) has been trending sideways since April 11 but broke out of its April consolidation, but has turned lower. Time will tell if Money Flow begins to rise again.

Positive Development: SMH is now leading in relative strength compared to the QQQ and has broken the January Downtrend.

A rising line means the SMH is stronger, and if falling, the QQQ is stronger. SMH is leading in relative strength compared to QQQ. SMH has been weaker than QQQ since early 2022. It’s a positive sign that the SMH /QQQ ratio broke above the previously broken support and has broken the 2022 downtrend. Continued outperformance in SMH compared to QQQ would be positive for US Equities. 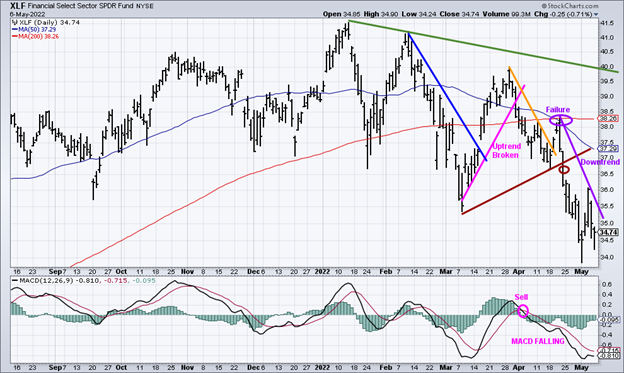 MACD remains on a sell, below zero, and falling. The good news is a potential double bottom is forming.  However, until XLF closes above 36.25 and MACD turns up, the risk remains of further downside.

A volatile week to the up and downside. What appeared to be an upside reversal wound up another selling opportunity for bears. The short-term trend remains down, with momentum patterns oversold but not yet favorable. Be alert to a possible short-term bounce early in the week if semiconductors and small caps lead the way higher. However, for a sustainable rally, more time is needed for downside momentum to slow and a safer buying opportunity to present itself.

Do you like charts? I would love to hear from you. If you have any questions or comments, or if you would like to talk about the market, email me at Bonnie@Bonniegortler.com