While the decline in the broad stock market over the first half of this year has led many to believe the current bear market is just that old, it may be important to note that many of the most popular stocks in the market peaked and rolled over well before the major indexes did, states Jesse Felder of TheFelderReport.com.

In fact, it was the meme stock blowoff top back in February of 2021, nearly a year before the peak in the broad market, that marked the beginning of the bear market for many. And this sequence should be familiar to those of us who were involved in markets a couple of decades ago.

Back in early March of 2000, the Nasdaq (NDX) put in a blow-off top of its own, similar to that can be seen in the Goldman Sachs Non-Profitable Tech Index in February of 2021 (both indexed to 100 in the chart below). Much like the broader market today, the other major indexes didn’t follow the lead of the Nasdaq until several months later. In fact, the NYSE Composite even went on to make a new high in September of 2000, much like the major indexes did late last year. In both cases, the failure of the most speculative stocks in the market to confirm those later highs served as a clear warning sign for risk appetites in a broader sense. 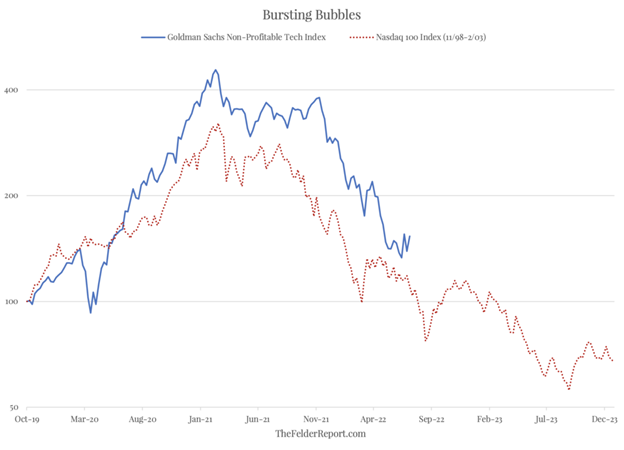 What is perhaps most striking about the comparison in the chart above is the fact that in the 16-month run-up to its final peak the Goldman Sachs Non-Profitable Tech Index significantly outperformed the Nasdaq 100 Index in the final blowoff stage of its own bubble: a 450% gain in the former versus 300% in the latter. Of course, it’s not an apples-to-apples comparison (Goldman’s index doesn’t go back that far) but, after witnessing the first bubble in real-time, it’s also not something I thought I would ever see again let alone something I would see surpassed in such dramatic fashion.

It’s also interesting to note the correlation between the two price patterns (at 0.87)  is very high which just goes to show that when bubbles burst, there is a fairly predictable pattern they follow. And if that earlier history of the Nasdaq during the Dotcom Bubble is to remain a valid guide, there is still a great deal of potential downside ahead even after the carnage we have seen in the speculative favorites so far. How do you lose 90%? You lose 50% and then you lose 50% again…and then you lose 50% once more. The current cycle has now seen the first two halvings.

The final one could be still ahead.