Is Housing the Market's Achilles Heel?

Ironically, in 2005, very few believed us when we introduced our Housing Bellwether Barometer as a disturbing warning of a dangerous bubble in the housing market, recalls Jim Stack, money manager and editor of InvesTech Research.

Then, in August of 2021, we warned, "There is strong compelling evidence that the housing market is in a bubble — a potentially bigger and more dangerous one in terms of prices and sentiment than the 2005 Housing Bubble."

Like in 2005, that warning about the overvaluation extremes and developing danger flags in housing was treated by some with a high degree of skepticism. That is starting to change. Indeed, the latest evidence so compelling that it would be difficult to argue that the U.S. housing market isn’t heading for a hard landing.

The evidence that is unfolding might be called the confluence of a perfect storm! First, to put today’s extraordinary post-pandemic run-up in housing prices into historical perspective, we have taken the percentage increase in Median Family Home prices over the past 10+ years and overlaid them on the parabolic price gain leading up to the peak of the 2005 U.S. Housing Bubble, as well as Japan’s Housing Bubble which peaked in 1991. 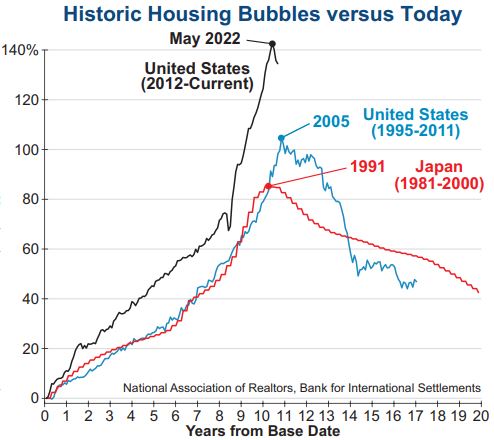 In our view, the debate about whether the U.S. economy is in a recession, or going into a recession, is over. The Leading Economic Index (LEI) from the Conference Board is comprised of 10 different leading macroeconomic indicators — from housing to manufacturing to the yield spreads and so on.

After peaking in February, the LEI has fallen in 6 of the past 7 months and has now crossed below its 18-month moving average as shown in the upper graph below. In addition, the “rate of change” has fallen to a contractionary level.

One of the most critical segments of the U.S. economy is housing (17% of GDP), as it can cushion — or instead intensify — a potential economic downturn. At the time of our April housing issue (noted in the chart below) we warned of an imminent hard landing, and specifically said to watch the National Association of Home Builders (NAHB) surveys for confirmation.

Since then, we have seen a record 10th consecutive decline in Builder Confidence — fueled by the persistent downturn in Traffic of Prospective Buyers. The size and rate of this decline confirms that confidence in the U.S. housing market is on a crumbling foundation very similar to what followed the peak in the 2005 Housing Bubble. 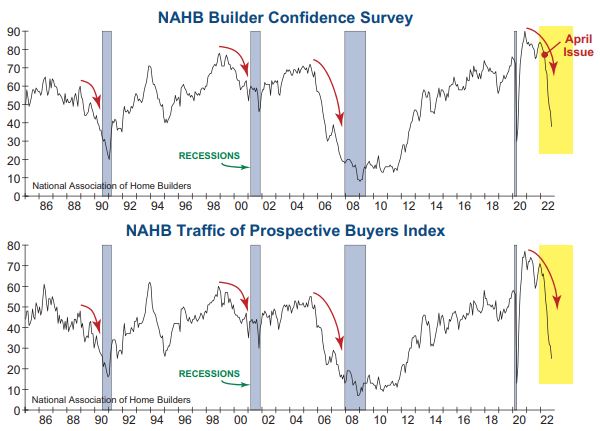 This is compelling evidence that the housing market is heading for a hard landing. And perhaps the major question is whether the landing gear will be torn off... and the landing will turn into something worse.

Meanwhile, other housing data is also mimicking the rapid unwinding that played out after the 2005 Housing Bubble peak. Over the past year, New Home Sales have fallen as homebuyer demand falters and cancellations are on the rise. In addition, housing affordability — which was already bad — has just gotten a lot worse.

The steep run-up in housing prices over the past decade has made affordability a major obstacle for new home buyers. However, the dramatic upturn in mortgage rates from sub-3% levels during the pandemic to nearly 7% today is like taking a wrecking ball to the housing market. This 20-year high in long-term mortgage rates is dramatically impacting affordability to a degree not seen in many decades. 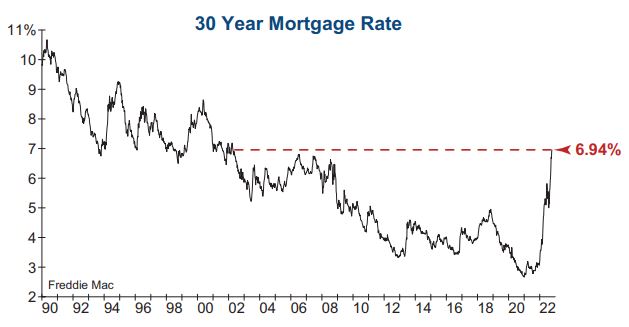 Evidence of this is clearly visible in the median Mortgage Payment as a percentage of Monthly Income which has surged to its highest level in nearly 40 years. As shown below, the median homeowner’s mortgage payment now eats up more than 30% of their income. This degree of payment unaffordability far surpasses the peak reached during the 2005 Housing Bubble and is only exceeded by the period of record high interest rates during the early 1980s. 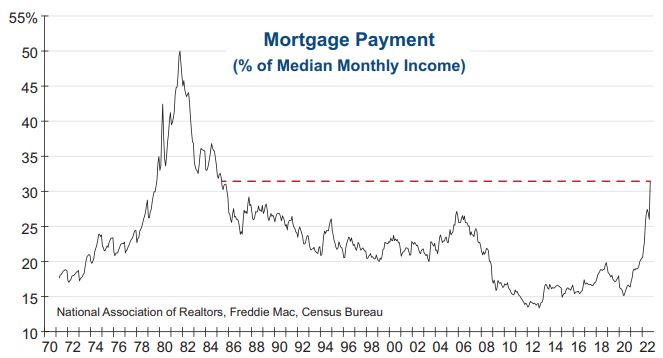 Throughout history, housing prices have closely tracked both long-term inflation and income. That, in essence, is the measure of affordability — whether new home buyers can scrape together the initial down payment and also afford their monthly mortgage. When the disparity between prices and income (i.e., affordability) gets extreme, there is almost inevitably a normalization.

That was the case in the early 1980s, for those who might remember that lengthy housing recession. It was far more dramatic when the last housing bubble peaked in 2005 and required seven years to fully “adjust.” With prices now at an even greater extreme relative to income, one can only guess how today’s affordability crisis will resolve. 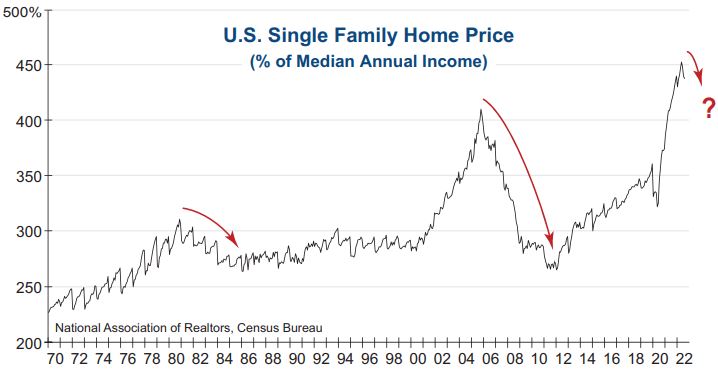 In our view, the housing market is the Achilles heel of today’s U.S. economy and the probable recession ahead. How these excesses unwind will be a determining factor in both the depth and duration of the upcoming recession as it starts to unfold.

The message today from our Housing Bubble Bellwether Barometer is eerily similar to that warning in 2005. Today, after rallying sharply from the June low, this Housing Bellwether Barometer is close to breaking a critical support level. If it breaks sharply lower in the weeks or months ahead, then expect a far harder landing for housing and potentially the economy. 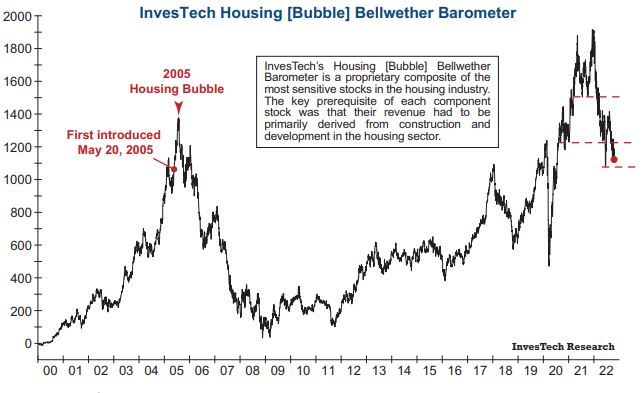 There is a tremendous amount of risk in today’s economy, and a lot not to like about the current stock market environment:

• The Federal Reserve has already raised interest rates 5 times this year, with another 2 rate hikes expected before year end.

• Inflation pressures on the Federal Reserve remain extraordinarily high. That means Wall Street’s widespread hopes of a reversal or pivot in Federal Reserve policy will be met with disappointment.

• Housing is already falling into a recession, as new home buyers are drying up. And the full effect of 7% mortgage rates hasn’t yet been felt.

• While the ISM Surveys in manufacturing and services are still positive, they are both falling and could reach contractionary levels by early next year.

• Our InvesTech Canary Index (speculative stocks that are most representative of the developing bubble) and InvesTech Gorilla Index (20 mega-cap momentum stocks) are both sending red flag signals that any further break from current levels could trigger a significant increase in investor selling.

The greatest risk to the economy or even the stock market may not lie in Federal Reserve policy, but in housing. Our Housing Bellwether Barometer will likely prove an important guiding factor as this perfect storm of converging forces continues to run it course.

The compelling evidence we see for stocks and housing is clearly ominous enough to warrant maintaining our high-cash, high-defense allocation for as long as it takes for storm clouds overhead to eventually pass.

One must step back over 13 years to find the lessons of a major bear market, and over 40 years to relearn the torturous lessons of an inflationary bear market. Very few bear markets are short, timid, or simply end when blue chip indexes are down -25% or so.

In fact, the bigger ones often result in -50% losses in the S&P or DJIA and can last 18 to 24 months or longer. And every major, painful bear market started out as a minor, painless correction. That is the historical truth about larger bear markets that can turn out to be life-changing events.

Looking across the valley...

It is important to never underestimate the downside risk in a bear market. And while this bear market may be far from over, there is a light at the end of this dangerous tunnel in simply knowing that bear markets always end.

We successfully navigated the washout of the Tech Bubble that stretched for two and one-half years before hitting bottom in October 2002. And again, during the 2008 Financial Crisis and 18-month bear market, we avoided a major portion of the downside risk with our defensive allocation and high 45-55% cash reserve.

Today, InvesTech’s Model Fund Portfolio is even more defensively allocated with only a 38% net exposure to stocks (50% long positions and 12% in an inverse index ETF). The remainder of the portfolio, 38%, is held in short-term treasuries or a money market fund. That is more cautious than at any time since the Tech Bubble washout in 2002.

We plan to continue our focus on risk management and maximum defenses as long as dark storm clouds are gathered overhead. A patient and disciplined approach remains imperative as evidence strongly points to new bear market lows ahead. At a time like this, it’s valuable to remember that those who successfully navigate through this bear market will eventually be rewarded with a great buying opportunity!