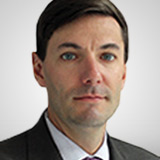 Nonetheless, the recent rally in internet shares may have some thinking either that they missed the boat or that current valuations are unsustainable. However, we believe there are reasons to remain positive about the sector's prospects for both near-term and long-term growth.

We have identified three key areas of focus for the internet sector: Ant Group's pursuit of what may prove to be the largest initial public offering (IPO) in world history in Hong Kong and Shanghai, the potential for Alibaba's Hong Kong listing and other recent Hong Kong IPOs to be included in Southbound Connect, thereby opening their shares up to Mainland Chinese investors for the first time, and a potential contrarian investment opportunity arising from US-China headlines leading up to the US election.

These topics are coming to the fore as valuations in China's internet sector remain attractive compared to their US peers. Although recent strong performance has pushed KWEB's price-to-earnings growth ratio (PEG) higher than its historical average, investors are still paying double for a similar quality of growth in the US. To further understand this valuation gap, consider the fact that Amazon's market cap is $1.7 trillion and Apple's market cap is $2 trillion. In comparison, Alibaba's market cap is only $770 billion and Tencent's is a mere $665 billion.

Before diving into these three areas of focus, it is important to note that the macro backdrop of consumption in China remains strong. China's supply-side has recovered from the pandemic and demand is beginning to catch up. Furthermore, the government's new policy of "dual circulation," i.e. stimulating domestic demand, and simultaneously, augmenting China's role at a high level in the global economy is likely to have a positive impact on companies in China's internet sector, which benefit from increased domestic demand.

Ant Group recently revealed its plans to pursue an initial public offering (IPO) in both Hong Kong and Shanghai. As the company seeks to raise $30 billion through the offering, implying a total valuation of over $200 billion, the IPO could be the largest in history. Ant Group began as the payment processing service, Alipay, which enables transactions on Alibaba's e-commerce marketplace. Since then, it has grown to offer banking products, credit rating services, insurance, and investment products including the world's largest money market mutual fund. Nonetheless, payments are still Ant's bread and butter, and the firm's share of China's approximately $8 trillion digital payments market was over 50% in 2019. After moving into positive margin territory in the first half of the year, we believe Ant's profitability underscores the viability of its business model and those of similar businesses. Therefore, the company's public debut may lead to a valuation boost for firms such as Alibaba and Tencent.

In its prospectus, the company stated that increasing the trust between buyers and sellers in online transactions was their initial goal. Achieving that goal, in turn, has facilitated the e-commerce evolution in China. The company's prospectus had another key theme: technological facilitation rather than end-to-end integration.

A menu within the Alipay app displaying the wide variety of services available on the platform.

Ant Group made a point of clarifying that their role is as a facilitator of e-commerce and innovative financial services. This means that they want to create the infrastructure that allows parties to transact. For example, in financial services, Ant works with existing banks to digitize their operations, and in insurance, they work with traditional insurers to provide an online marketplace for their policies. At present, Ant works with over 200 banks and insurers, but plans to expand its partner network into the 1,000s.

We believe that this business model is akin to that of Amazon, whereby, at least at the start, they will have no intention of replacing the businesses that already make up these spaces. Instead, they focus on providing a centralized and efficient marketplace and ecosystem in which these businesses may transact with customers.

Ant Group has seen impressive growth over the past few years. UBS reports that, in the first half of 2020, revenues grew 38% from the same period in 2019. Furthermore, credit services have now surpassed payments to become the company's top contributor to revenue. Insurance revenues nearly doubled from 2018 to 2019.

Despite growing so quickly, Ant Group has demonstrated a path to profit by driving operating margins up from -16.8% in 2018 to 38.1% in the first half of 2020. Notably, UBS analysts believe that Ant has demonstrated a margin advantage over Tencent in payments.

Due to its projected market capitalization and sector classification, Ant will likely qualify for KWEB's fast track index inclusion methodology and enter KWEB's CSI Overseas China Internet Index ten business days after its IPO date. Thanks to this feature of our index, KWEB was not only the first US-listed China ETF but also the first US-listed technology ETF to hold shares in Alibaba when the company listed publicly in the United States in 2014.

Everyone knows the old adage: invest in what you know. Well, that is precisely what we believe Mainland Chinese investors may do once companies that they are very familiar with, including Alibaba, become available on the Southbound Connect trading program.

Today, Mainland investors cannot trade in Alibaba shares because the company is currently listed in Hong Kong and New York only.

Investment through Southbound Connect this year has favored internet and technology stocks such as Xiaomi, Meituan Dianping, and Tencent, all of which have mostly Mainland customer bases but lack Mainland (A-share) listings. Being included among these names in the mutual market access program may provide a significant valuation boost for Alibaba. Having been added to the Hang Seng Large Cap Composite Index in September, Alibaba's Hong Kong shares are technically eligible for inclusion in Southbound Connect. However, inclusion in the program has been delayed due to regulatory complexities. Alibaba's Hong Kong shares are convertible to US shares, but investors cannot hold US-listed stocks in Mainland accounts. We believe this issue will be resolved promptly as brokers must execute the conversion upon client requests, meaning that conversions are already subject to review. Furthermore, Southbound Connect participants are already barred from purchasing Hong Kong shares that are denominated in US dollars, meaning that brokers and clearing houses already have experience differentiating share classes.

Two major events have occurred in the political arena over the past quarter: the announcement of a potential bans on Tencent's US WeChat app and Bytedance's US TikTok app and the Senate's passing a bill to potentially delist Chinese stocks from US exchanges. Despite the attention paid to these headlines, KWEB has shown resilience and delivered strong performance for the quarter. The fundamental attractiveness of the sector may outweigh the headline risk. Furthermore, we believe many of these announcements amount to pre-election posturing and any seriously confrontational policy would risk an uproar in US equity markets as a whole just before an election.

We believe that the offshore Chinese renminbi (CNH), may act as a bellwether for the potential market impact of any political action. Generally, headlines tend to move stocks in an exaggerated fashion as algorithms and high frequency trading computers are programmed to trade on the news. Stocks thus tend to be more volatile in the short term, however, they often later rebound. Rather than be emotionally led by breaking news, we believe in taking a more calculated approach by following CNH, which trades during US market hours. In fact, because the offshore currency trades during US hours, some brokers check CNH before buying or selling US listed Chinese companies following negative political headlines. Year to date, CNH has appreciated versus the US dollar. 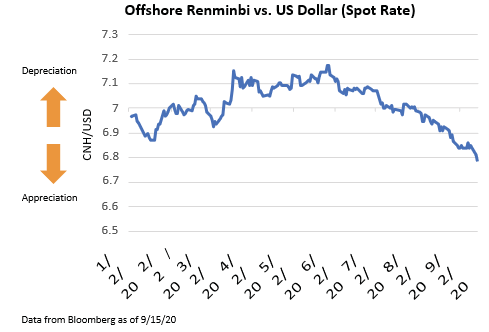 Diving into these announcements themselves, we find that their immediate consequences for the China internet sector have consisted of mostly short-term dips in equity prices and were largely smoothed out in the long-term. In the case of the the proposed bans on TikTok and WeChat in the US, numerous details regarding the policies have yet to be ironed out, not to mention the legal challenge currently being pursued by Tiktok's owner ByteDance. Furthermore, the US accounted for less than 2% of WeChat's revenue in the second quarter, making even a total ban nearly inconsequential to Tencent's bottom line.

The Holding Foreign Companies Accountable Act prohibits the securities of any company from being listed on any of the US securities exchanges if the company fails to comply with the Public Company Accounting Oversight Board (PCAOB)'s audits for three years in a row and requires public companies to disclose whether they are owned by a foreign government. We do not believe these new stipulations pose much risk to the listings of the private (i.e. non-state-owned) and accountable internet firms that we hold in KWEB. On the contrary, we believe that more transparency is in our clients' best interest. Nonetheless, we do have the ability to convert US shares to Hong Kong shares in the case of our holdings that have secondary listings on the city's exchange, should the need to do so arise.

While the market reacted negatively to these announcements, on a year-to-date basis, the fund has demonstrated resilience, as seen in the chart below. We believe these reactionary price movements provide attractive entry points to the fund. 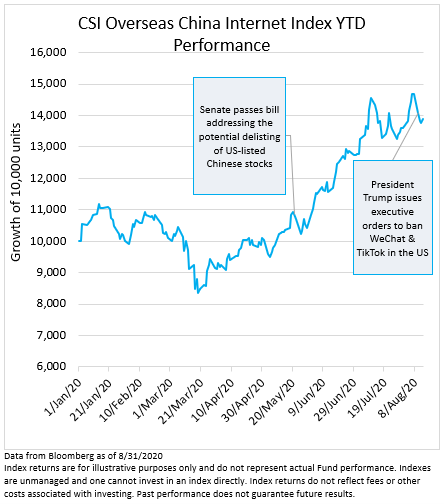 Index returns are for illustrative purposes only and do not represent actual fund performance. Indexes are unmanaged and one cannot invest in an index directly. Index returns do not reflect fees or other costs associated with investing. Past performance does not guarantee future results.