The Fed’s latest rate hike and the DC politics have me humming Pink Floyd’s Another Brick in the Wall: “We don’t need no education. We don’t need no thought control. No dark sarcasm in the classroom. Teachers leave them kids alone,” writes Dr. Joe Duarte Sunday.

As the witching month of October kicks in, visions of ghoulish stock massacres may be dancing across the sub or otherwise conscious levels of traders and hedge fund managers just as the market seems to be setting up for a big move. This is especially prescient for those hedgies whose coffers have seen client withdrawals over the past couple of quarters.

Last week I wrote: “At this point the potential divergence of the NYAD and the major indexes may be meaningful, or it may be just another installment of this bull market’s penchant for algo-triggered fake outs, especially if the line catches up to the Dow (DJI) and the S&P 500 (SPX) and if the market continues its gallop higher over the next few weeks. However, I feel compelled to note that if stocks start to retreat wholesale, in retrospect, it may very well be that this very subtle technical development involving the Dow Jones Industrial Average and the New York Stock Exchange Advance Decline line might turn out to have been the proverbial S-E-L-L Signal.”

In fact, at first glance little has changed on the surface of the market as stocks exhibited some volatility while no grossly discernible change in the general uptrend seemed to emerge after the Fed raised rates and the Washington situation developed. That the market didn’t crash given those two events is nearly impossible to describe. Indeed, because of what we don’t know and can’t predict, the wall of worry may climb even further.

Mostly, this market is becoming a fragmented, stock specific and sector specific affair as investors parse the vagaries of the Federal Reserve and the plausible evolution of whatever is next. Thus, those who are fortunate enough to be parked in the right assets are likely to be doing just fine, for now, even if they are nervous and in full knowledge that the current status quo may not last.

Moreover, recent news that corporate insiders are selling stocks at a record pace while the market is parked near a significant decision point makes this a moment where wakefulness is the key to survival.

Odds favor a big move ahead

The New York Stock Exchange Advance Decline line (NYAD) is nearing a decision point. This is a major development because of the uncanny ability of this indicator to point the way for stocks since November 2016. 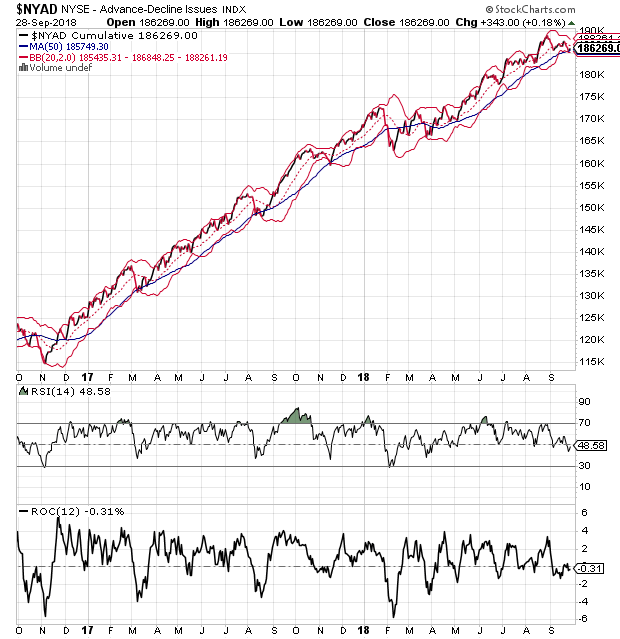 Specifically, the NYAD is forming a base above its 50-day moving average and the lower Bollinger Band. A review of the indicator’s chart over the past two years shows that when the line has found support at the convergence of these two support levels – December 2017, March 2017, August 2017, November 2017, and August 2018 – the market has rallied.

In contrast, the only time the indicator fell below these two support levels – January 2018 – marked a period of significant price sluggishness. 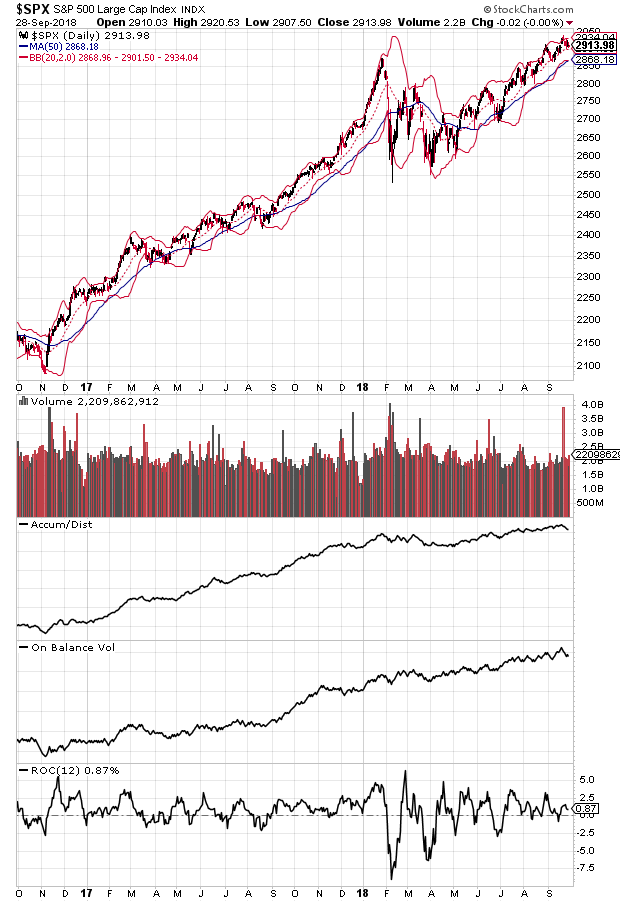 Perhaps the best clue as to which way things will break lies with the RSI indicator.

If the past is any prelude to the present, RSI for the NYAD may have to fall further before the market to whip up the bears just a bit more, and thus fuel a more meaningful rally, if indeed once does materialize. 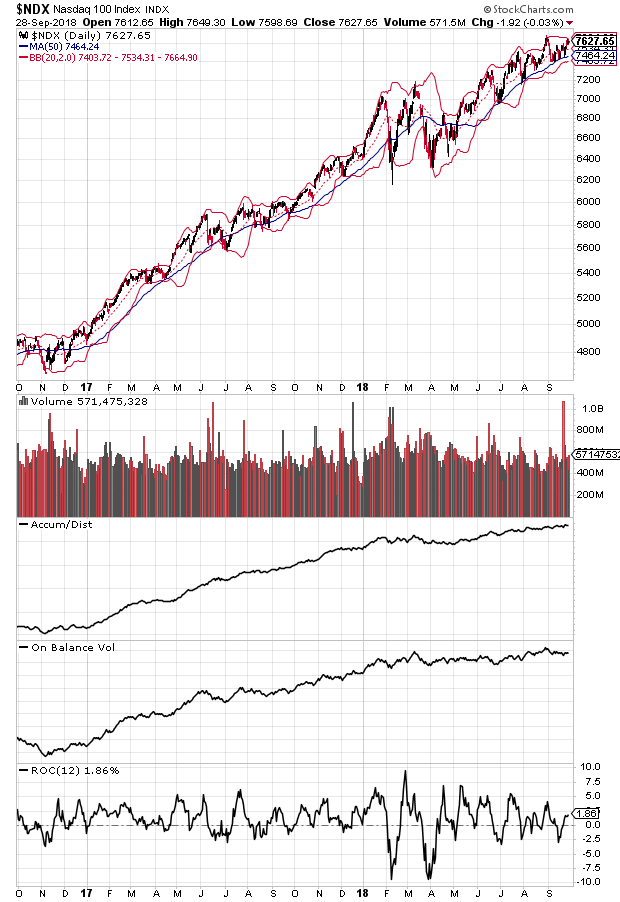 The SPX and the Nasdaq 100 (NDX) indexes remain within reach of their recent highs which is a positive. However, and this may be a fleeting thing, On Balance Volume (OBV) for both seems a bit weak.

This is more noticeable on NDX, which has had its share of blowups in the FAANG stocks: Facebook (FB), Apple (AAPL), Amazon.com (AMZN), Netflix (NFLX), Alphabet (GOOG) of late. 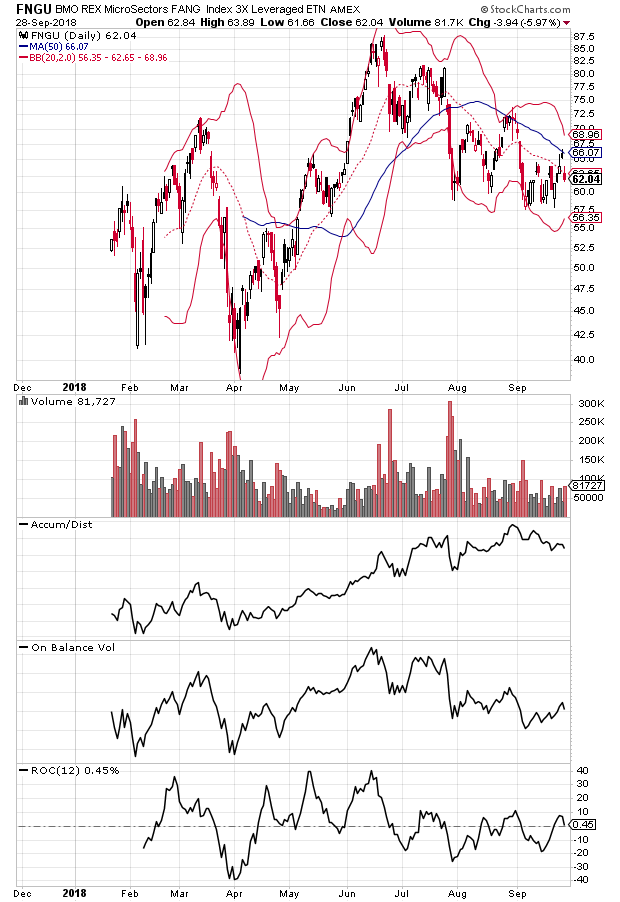 In fact, the chart of the FANG Index ETF (FNGU) is tracing a price pattern of lower lows and lower highs, which is being confirmed by a similar appearance in OBV and ADI. If this is not reversed, things may get very interesting in a hurry.

The market remains in an uptrend, but it is becoming more selective. This is best illustrated by the action in the NDX index and the FNGU ETN, both heavily weighted toward the FAANG stocks, as reports of aggressive corporate insider selling and hedge fund client withdrawals are beginning to emerge.

Moreover, October is often a down month and the market is not at its most bullish posture at the moment. Furthermore, with money market rates nearing the 2% mark, it’s much more difficult to justify the case for buying extremely overvalued momentum stocks as aggressively as when interest rates were zero.

“All in all, it was just another brick in the wall.”

Thus, this is a great time to follow the Duarte mantra: Trade small, hedge, use options, and stick with what’s working.

Joe Duarte has been an active trader and widely recognized stock market analyst since 1987. He is author of Trading Options for Dummies, rated a TOP Options Book for 2018 by Benzinga.com - now in its third edition, The Everything Investing in your 20s and 30s and six other trading books. To receive Joe’s exclusive stock, option, and ETF recommendations, in your mailbox every week visit https://joeduarteinthemoneyoptions.com/secure/order_email.asp.