Traders Should Prepare for a Surprise Turn—Soon

Traders should be prepared for something unexpected in the markets fairly soon, writes Joe Duarte.

Global stock traders will have a serious decision to make in the next few days to weeks regarding the effects of lower interest rates on share prices. Moreover, one thing is fairly clear, the trend toward lower rates seems to be well defined now with central banks lowering rates regularly and an interesting move by China’s central bank over the weekend where they streamlined the mechanism of getting money from the central bank out to private banks and making loans to the public easier to obtain.

Certainly, the market’s largest participants, the artificial intelligence robot trading algorithms are programmed to rally in the face of lower interest rates, which is why this market has not fallen completely apart lately. Recent history shows stocks rallied on lower rates since the bottom in 2009 until the Federal Reserve started raising interest rates in 2016. In fact, the market didn’t really get dicey until 2018 when the Fed pulled the higher rate lever once too often.

Nevertheless, the state of the economy is also an important factor; with economic data slowing globally and slowly but surely in the United States, things could get a lot worse. Therefore, in this fast moving volatile market, rather than trading on broad assumptions, it’s best to make trading decisions based on what you see, albeit tempered by a healthy mixture of skepticism and an understanding of the playing field. As a result, it’s important to establish some landmarks and set some targets in order to make the most of what could be a tradable bottom.

Above all, realize that events move at the speed of light and information links the markets, the economy, and people’s lives (MEL) nearly simultaneously creating rapid trend changes in all three areas. Note the rapid increase in mortgage refinancing that has occurred since the Fed lowered rates and bond yields followed with a rapid collapse. Meanwhile consumer sentiment has taken a hit as everyday people, with instant access to information, are suddenly worried about a recession. That this has happened in a few weeks instead of months is proof that MEL is indeed an entity to contend with at the moment.

As a result of these converging factors a trader’s reaction time must be shortened, judgment must be hedged, and any trading decisions must be based on sound technical indicators, which is why I am studying the New York Stock Exchange Advance Decline line and its current posture in detail along with updating some observations on three houses that I have been watching on a regular basis as a bellwether on the housing sector in order to evaluate the current status of MEL.

Since buying a home is the largest financial decision many undertake, I’ve been watching three houses in my daily travels that have been for sale over the last few weeks. One of them is an older home which needs lots of updates. The other two are newer homes in what is described as an “up and coming neighborhood” for young professionals, an area that was hopping during the last housing boom and which recovered nicely when the market improved after the subprime mortgage crisis stabilized.

The older home was listed for $599,000 initially but after several months on the market, it’s now off the market after many open houses which saw little traffic. The other two homes both initially listed for $800,000 or above and have been on the market for at least 60 days each. One of them is now listed for $741,000 and the other for $784,000. The Zillow.com description on the less expensive of the two lists the seller as motivated. Interestingly, lower priced, more affordable town homes in my survey area have sold well after the Fed lowered rates and mortgage rates followed.

Meanwhile, with the U.S. 10 Year note yield below 1.7%, new homes are selling steadily at best, except for manufactured homes (see chart below). Still, it’s obvious that older homes whose prices are high seem to be struggling despite 15-year mortgage rates as low as 3.17% and 30-year loans as low as 3.65% in some areas of the country according to Bankrate.com. 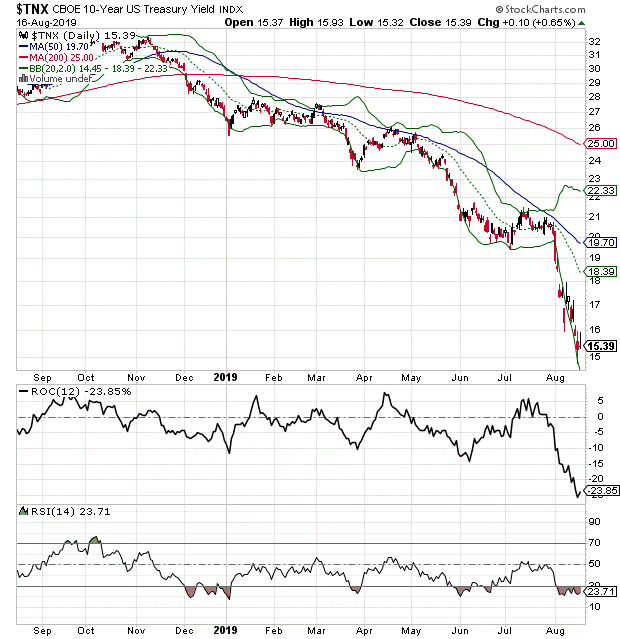 Indeed, the bottom line seems to be that the key to housing is affordability, which is clearly overwhelming the relatively tight supply of homes to buy. Where this whole dynamic comes together is in the inner workings of MEL. This is due to the impact of the housing industry on the U.S. manufacturing sector. This connection is due to the building of new homes, and the ongoing repairs and remodeling required for existing homes, especially as a contributor to employment in trades as well as real estate sales, retailing, transport, and related industries.

The bottom line is that if housing does not pick up, or at the worst remain stable, the risks of recession will definitely rise. 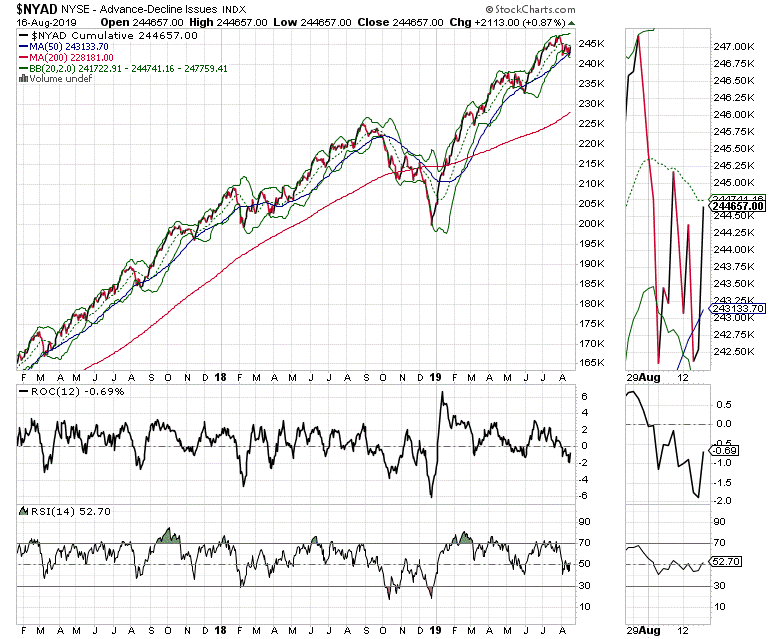 And its current posture suggests that the market is trying to bottom. However, a bottom may be scarce without a catalyst, such as a surprise trade deal between the U.S. and China, improvement in Purchasing Managers Indexes or ISM numbers, and/or encouraging existing home sales.

That said what the chart shows is that after the 2016 election, NYAD found support at its 50-day moving average five times and rallied to new highs off of that area. Conversely the market’s only significant decline during the period came in October 2018 after a major break below this key support line. This suggests that if NYAD can survive its current test of the 50-day moving average, the odds favor yet another rally, perhaps to new highs once again.

Also notable, the NYAD chart shows that anytime the relative strength index (RSI) indicator finds support near the 40-50 area, odds are high for this dip to be a solid buying opportunity. This is where NYAD’s RSI closed on Aug. 16.

Putting it all together, along with the fact that global central banks are about to hit the printing presses, and that algos are programmed to buy on lower rates, you have to seriously consider that we may be at yet another tradable bottom.

Both the Nasdaq 100 (NDX) and the S&P 500 (SPX) remain below their 50-day moving averages, a fact which suggests large cap stocks – technology, energy, autos - that are vulnerable to the U.S.-China Trade war and the increasingly rapid slowing of the European economy are holding things back. 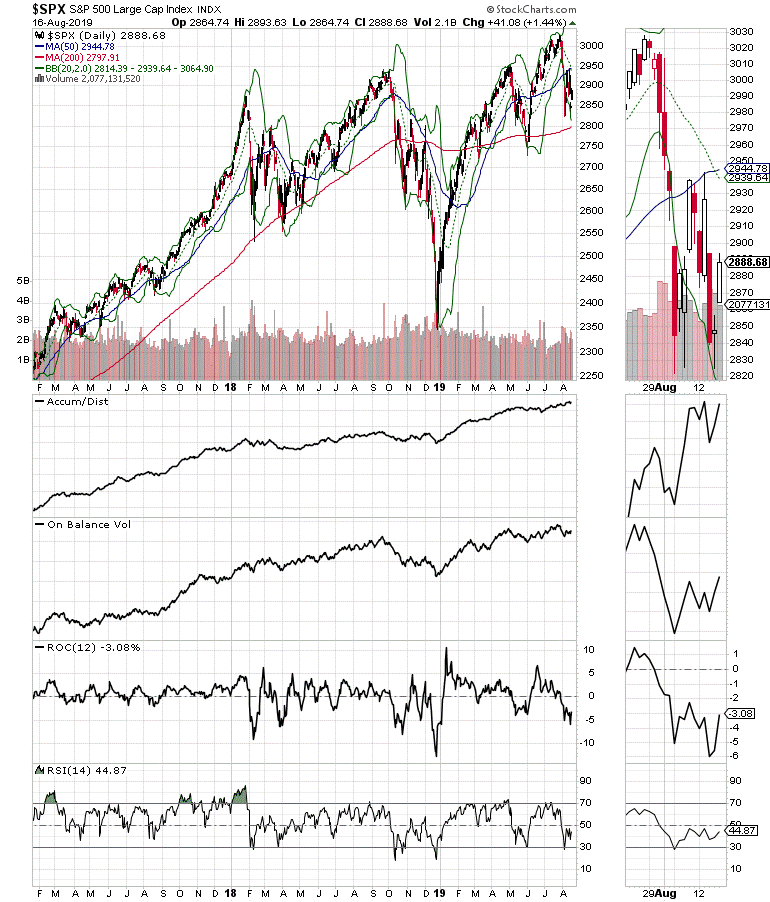 Still, it’s interesting to note that Accumulation Distribution (ADI) and On Balance Volume (OBV) both turned up to end the week of Aug. 16. 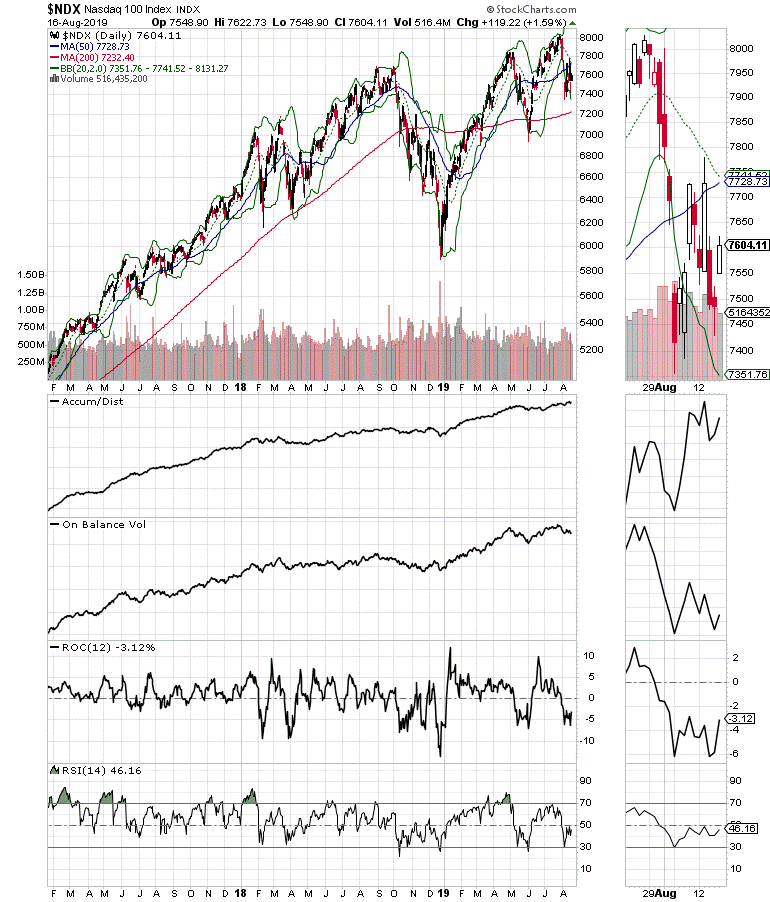 Meanwhile, money is still moving into interest rate sensitive sectors, including home builders as represented by the Invesco S&P 500 High Beta ETF (SPHB) and REITs through the S&P 500 Real Estate Sector Index ($SRRE), the latter of which broke out to a new high last week. 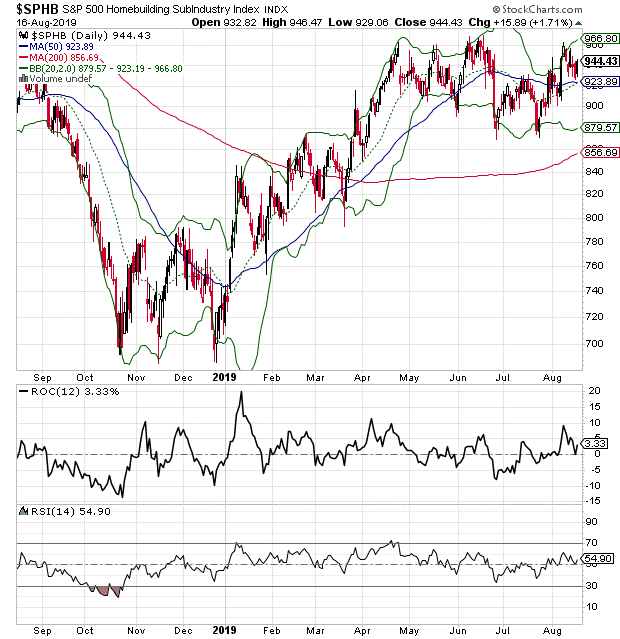 Still, from a trading standpoint, owning selective REITs and homebuilders has paid off over the last few weeks as the market has faltered and is a solid strategy until proven otherwise. 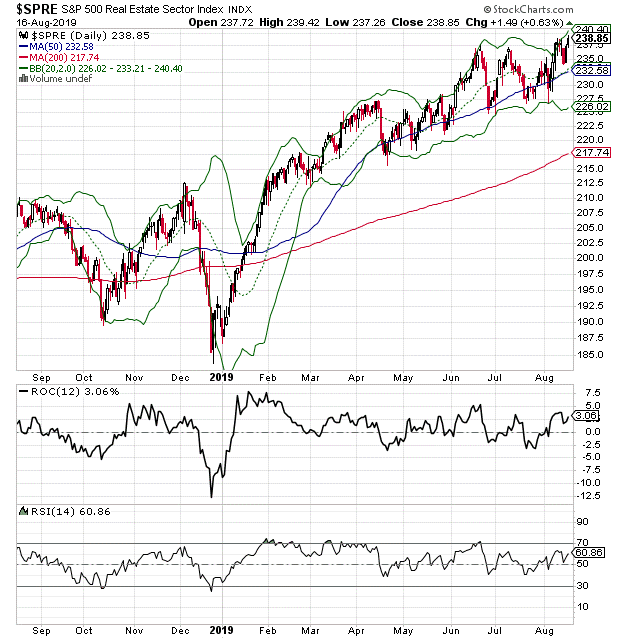 The former, as I’ve noted here multiple times offers low cost housing options in a market where affordability is the key. Compared to some of its conventional homebuilder competitors, SKY has been increasing its manufacturing capacity while raising prices, both signs of strength. SKY recently increased its full year’s earnings guidance and should be helped by lower interest rates. More important, OBV for the stock is in a well-entrenched up trend suggesting money is coming into the stock.

Welltower, for its own account, just made a new high, and is a great way to play the aging demographic theme while collecting income as the company provides land and management services to assisted living and other types of living arrangement communities that target the aging U.S. population. The company just paid an 87¢ quarterly dividend.

Get Ready for Everything

Get ready for everything, as the financial markets could turn on a dime in the not too distant future. Indeed, vigilance will pay off given the daily news cycle and the interplay between interest rates and the Market-Economy-Life (MEL) complex.

I own WELL and SKY as of this writing.

With markets already pricing in a significant economic decline, this isn’t a good time to make...

Novavax and Regeneron: Speculating on Vaccines
1 hour ago

Crude continues to weaken and stock rally likely will fade as Q1 comes to an end, reports Adam Butto...