The equity market has been at a standstill for the past two months as the S&P 500 (SPX) has been virtually flat since August 10, states Joon Choi of Signal Alert Asset Management.

The bulls and bears are tugging at each other but to no avail. However, the bears won out on October 6 as SPX reversed 2% closing 1.4% lower (other major indices saw similar reversals) after President Trump announced that the GOP will not negotiate on a new stimulus bill until after the presidential election. Covid-19 infections are rising in many US states, as well as countries around the world. This may hinder economic recovery from the pandemic as the world may have to lock down once again. Although the equity outlook is uncertain, the energy sector seems attractive and I will discuss here why it may be a good investment during these times.

Even After SPX recovered all its losses on August 18, it is slightly down since. However, not all sectors have participated equally. The big winner and loser are the technology sector (XLK) with a 27% year-to-date gain and the energy sector with 48% a loss (as of October 6). The reason for the dismal sector performance is two-fold. First, economic disruption stemming from the Covid-19 pandemic reduced oil demand as remote working/schooling reduced the use of oil (automobile, planes, etc.) Second, oil-producing nations cannot afford to implement a meaningful cut in production to raise oil prices. 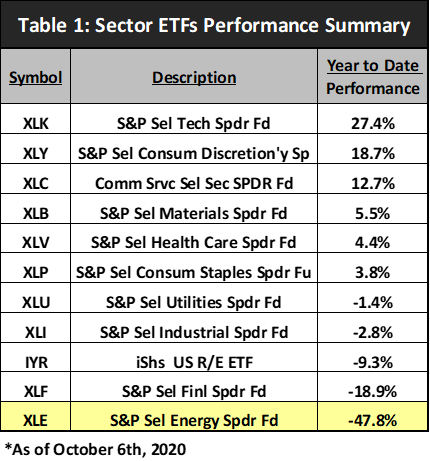 It appears that investors are baking in a worst-case scenario for the energy sector as XLE is still down almost 50% for the year. Warren Buffet once said investors should be “fearful when others are greedy, and greedy when others are fearful.” I believe the energy sector will provide a good opportunity for those who are not faint of heart. Since the introduction of S&P sector SPDRs at the end of 1998, XLE has never been cheaper compared to SPY. Moreover, the book value to price ratio of XLE is 1.1, which means that the sector’s valuation is slightly above the total asset value if all assets on their balance sheets are liquidated. This ratio is at its lowest since 1986; meaning the sector’s outlook is dismal. 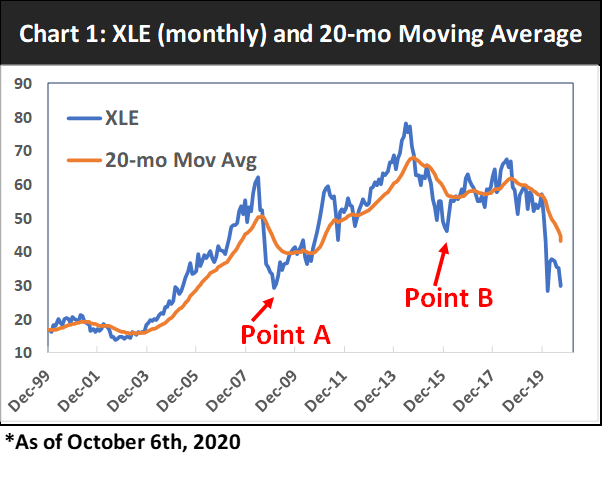 I measured the difference between XLE’s price and its EMA in percentage and plotted it in Chart 2 below, and overlayed their best fit line (trendline) capturing the best linear trend of the differences. I then drew equidistance parallel lines above and below the trendline (Lines A & B) that seem to contain the differences over the past two decades. We are currently at the lower line after penetrating below “B” in March; like 2009 but with further penetration. 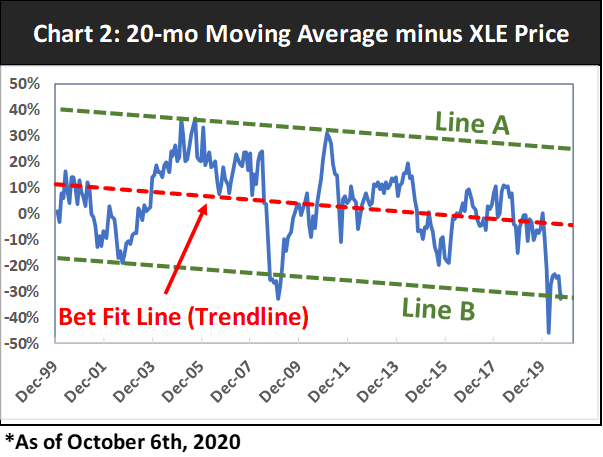 XLE’s 6-19 monthly MACD (Chart 3, below) displays a double bottom (similar to 2015-16), although falling bottoms are not as bullish as rising ones. Its 14-month RSI also appears similar to its 2015-16 setup when the indicator had a rising bottom. If XLE has an up month in October, then it is very likely that RSI will turn up, thus completing a rising bottom. Chart 3 also shows an upside objective of $48. This target implies a potential profit of 50% in the coming months.

A XLE covered call may be a safer (with less upside) way to take advantage of the current oversold condition in the energy sector by buying XLE in 100 lots and selling 1 call option for every 100 shares; for example, if you buy 1,000 shares of XLE then sell 10 call options. I recommend selling the $30 call option with a December 31 expiration, which is approximately 12 weeks. The bid price of this option is currently at $2.12, slightly out-of-the-money since XLE last traded $29.74. This means that if XLE closes above the $30 strike price by expiration, you would earn $2.12 in time premium, $0.26 in stock appreciation, and approximately $0.52 in dividends, which totals to $2.90 or 9.8%.

Although October has seen a larger number of 1% swings than any other month, the energy sector presents a rare investment opportunity as XLE is very oversold: especially versus other sectors such as XLK. Buying XLE offers a potential profit similar to my USO buy recommendation earlier this year (that trade captured 42% paper profit). A covered-call position may be a safer strategy if you want some downside protection in exchange for limiting its upside to 9.8%. I will keep you updated on the position’s activity in future issues.