Trade Idea: 2 of the Worst Stocks to Own in June: Delta, United Continental 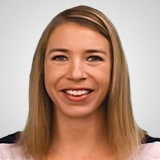 The U.S. stock market has put in an impressive May performance, with the S&P 500 Index (SPX) pacing toward a notable 1.5% monthly return -- a strong start to a historically bearish period.

However, the broad-market index tends to underperform in June, particularly during midterm election years. 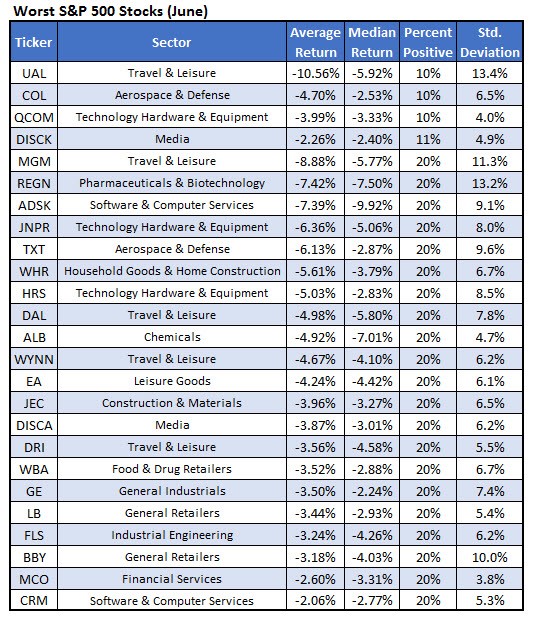 According to Schaeffer's Senior Quantitative Analyst Rocky White, Delta Air Lines stock has averaged a negative June return of 4.98% over the past 10 years -- and has finished the month in positive territory just 20% of the time. Based on its current perch at $54.46, down 2.5% on the day, another drop of this magnitude would put DAL near $51.75.

More broadly, the stock is down more than 10% from its late-January record high of $60.79, with recent rally attempts halted in the $56-$57 region, home to a 61.8% Fibonacci retracement of DAL’s first-quarter correction. However, the $51.50 region has emerged as a familiar floor, which coincides with a 23.6% retracement of that plunge, and the equity's 320-day moving average. 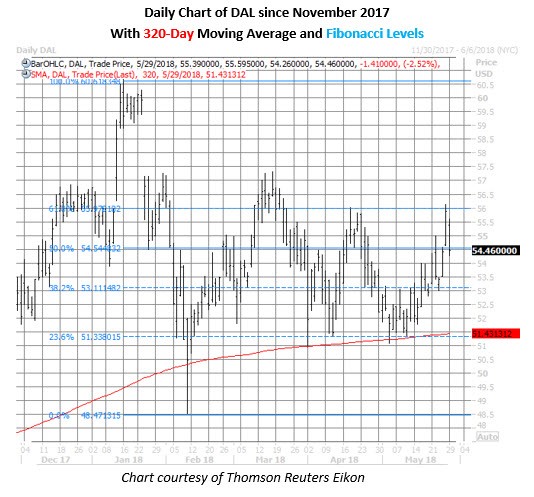 Analysts have yet to budge on their bullish ratings, with all 13 brokerages maintaining a Buy or better rating. Echoing this, the consensus 12-month Delta Air Lines price target is $72.94 -- a nearly 34% premium to the equity’s current perch. Should the stock continue to struggle, a round of downgrades and/or price targets could create bigger headwinds.

Bear notes start to roll in for UAL stock

Looking back over the past decade, United Continental shares have averaged a June loss of 10.56% -- the worst of all stocks. What's more, the shares have closed higher on the month just one time in the last 10 years. With UAL stock last seen trading down 2.9% at $69.64, it could be at risk of revisiting its mid-February lows next month.

Specifically, UAL fell more than 23% from its Jan. 24 peak at $79 to its Feb. 9 year-to-date low of $60.44. And while the shares have gained some ground since the sell-off, the $72-$73 region has kept a tight lid on the shares in recent months -- home to a 61.8% retracement of United Airlines' early 2018 plunge. On the downside, United Continental's 200-day moving average has cushioned pullbacks since March. 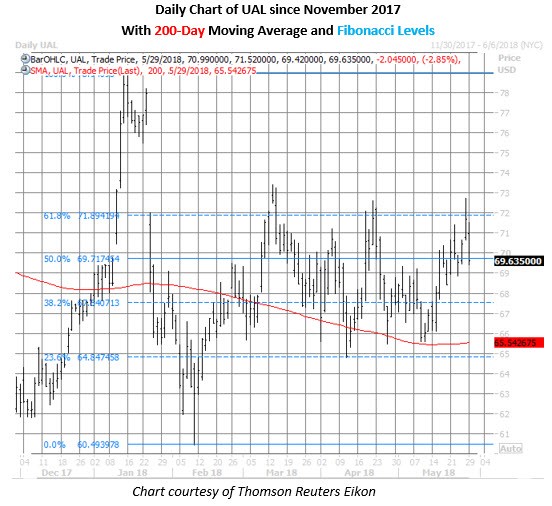 There’s certainly room for analysts to downwardly revise their outlooks for UAL. Seven of the 15 brokerages covering the airline stock still maintain a Strong Buy rating, with not a single Sell on the books. Plus, the average 12-month price target sits all the way up at $84.87 -- in record-high territory.

The security could continue to struggle, should analysts follow in the footsteps of Citigroup, with cut its UAL price target to $87 from $92 earlier.