There were a few solid economic reports which pushed the 10-year Treasury yield to 3% besides the uptick in the Japanese 10-year yield. One of those reports was the ADP private sector payrolls report, writes Don Kaufman.

The ADP Research Institute report showed 219,000 jobs were created in July which beat the consensus for 173,000 jobs. The high end of the expectations range was 220,000. June’s report was revised up from 177,000 to 181,000. This was the first month which added more than 200,000 jobs since February which is the month many consider to be the peak in manufacturing growth.

Since the ADP report was below the BLS report in the past two months, some are thinking this means the BLS report will show over 219,000 jobs created. That wouldn’t shock me because the jobless claims were very low in the week the BLS survey was conducted in July. While we’re on the topic of jobless claims, the claims reported on Thursday were 218,000 which met the consensus and were up 1,000 from the prior week. The 4-week moving average fell from 218,000 to 214,500. The consensus for the BLS report, which will be released Friday, is for 190,000 jobs created and for the participation rate to fall from 62.9% to 62.8%. Private payrolls are only expected to be up 184,000.

Manufacturing added 23,000 jobs which makes sense because of the strong regional Fed reports and the decent ISM Manufacturing report which I will review in a future article. Construction added 17,000 jobs. This sector will be pressured if the weakness in the housing sector continues. Weakness is spurring from rising rates which hurt affordability.

The service providing sector added 177,000 jobs which is the size of the entire economy’s job creation in June according to ADP. The increase was driven by education and health, professional and business, and leisure and hospitality which added 48,000, 47,000, and 37,000 jobs respectively.

July auto sales were weak which is a bad signal for Q3 GDP growth and is in line with the weakness in the ECRI leading index report. As you can see in the chart below, the seasonally adjusted annual run rate of light vehicle sales was only 16.8 million which missed estimates for 17.1 million. June’s report was revised down from 17.5 million to 17.2 million. July’s sales were the lowest rate since August of last year which was weakened by a hurricane. 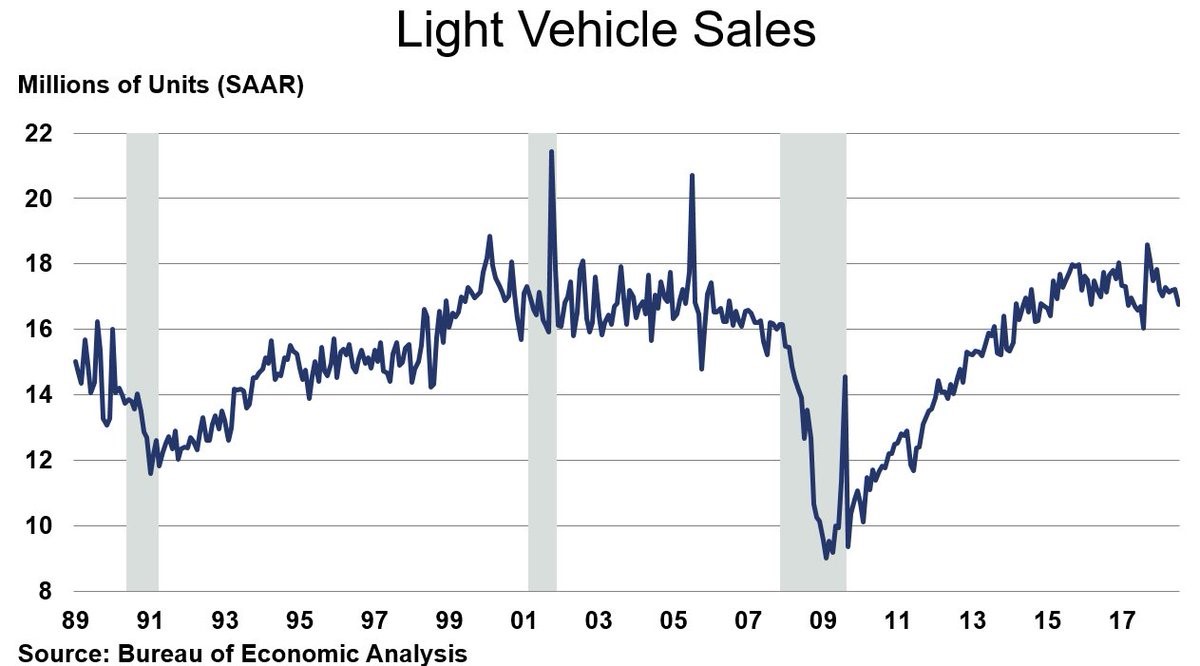 The good news is it doesn’t look like the climate is conducive for hurricanes this year. This means there won’t be weakness followed by a huge bump in replacement sales. We didn’t need a hurricane for weakness in July. Until I see other weak economic reports besides the ECRI leading index, I will expect light vehicle sales to remain at the current plateau.

Seasonally adjusted domestic vehicle sales were 13.1 million which beat the consensus for 12.9 million but fell from the revised June report which had sales of 13.4 million. Import sales fell from 3.8 million in June to 3.7 million in July.

Construction spending was weak sequentially in July. It was down 1.1% month over month which missed the consensus for 0.3% growth widely. The lowest estimate was for -0.3% meaning the weakness was way below estimates. The revision upwards in the June report was partially responsible for this decline as growth was pushed up from 0.4% to 1.3%.

Construction spending’s sequential decline was caused by weakness in new housing construction, shortages in skilled construction workers, and heightened prices for construction raw materials. The increase in steel prices is caused by the tariffs.

This earnings season has been strong. The latest results as of August 2 show EPS growth was been 25.53%. The average EPS estimate beat has been 6.06%. The consumer discretionary sector is leading the pack with an average beat of 8.64% with 58% of its firms reporting results so far. 94% of the 50 healthcare firms which have reported, have beat estimates. In total 81% of S&P 500 firms have beaten estimates.