The illustration that came with the article was great, credit Scott Anderson with a masterful piece, with a Gordon Gekko banker shirt and suspenders topped off with a heavy Motorola first edition battery phone to a Bluetooth, iPad, zipper vest wearing programmer trying to look cool. It was a fantastic rendition indeed!

Zhedge posted an article entitled, “Why do people assign value to paper money” by Frank Shostak via the Mises Institute. He talks about the circularity of the supply/demand for money and the purchasing power of money and that the primary acceptance of money is the result of “government decree.”

What a powerful tool, don’t you think, to have the power to say this holds value and this doesn’t? He went on to focus upon Carl Menger who doubted that the origin of money is a government proclamation, which is further backed up by Mises’ regression theorem, which is outlined in this statement here,

“By regressing through time, we will eventually arrive at a point in time when money was just an ordinary commodity. Its price was set by the demand and supply for a commodity. The commodity had an exchange value in terms of other commodities, i.e., its exchange value was established in barter.”

A good article to read and one which we suggest you certainly do so. When an institution has such control that it has the power to issue currency and give it to whomever it chooses, this places an absolute inequality maxim upon those involved.

What do we mean? We mean that winners and losers can be chosen, not at random, but by decree. Plainly put, the money printers decide who is first to the monetary spigot. 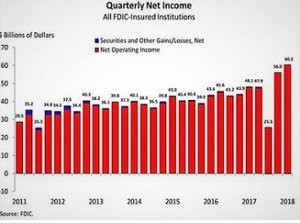 We need not look any further than this next Zhedge article aptly entitled, “U.S. Bank Profits Hit A Record $60 Billion In Q2” Do you honestly think this chart would look like this if the global central banks didn’t expand their balance sheets by a factor of 5 and peg real rates negative?

We visited MishTalk, one of our favorite bloggers, and he posted the new home sales chart which has sunk some 1.7%
This shouldn’t come as a surprise considering the Fed’s attempt to normalize short term interest rates: 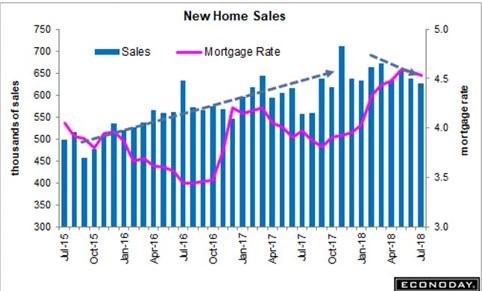 The buying conditions are moving south quickly and here is an up to date UMich Home Buying Conditions chart: 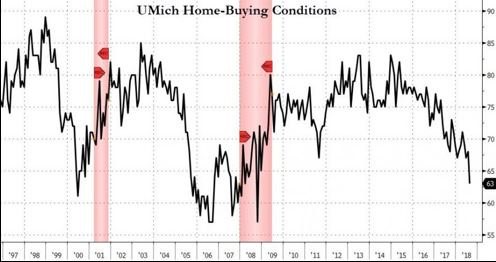 Valuations aren’t subjective, rather they are a function of well researched and well documented quantitative analysis, well at least they should be. Outside a massive technological shift or paradigm shifting revolution, one should be able to quantify value in terms of being overpriced or underpriced. Now our global central banks have done their best to lure the investing public into thinking prosperity comes in the form of more debt and low rates.

In fact, we would say their dual mandate is no longer price stability and stable employment, but rather perpetual Quantitative Easing and Negative real long-term rates. The true fact is, value isn’t subjective, rather a function of too much credit/money chasing a finite group of investments. Now if you talk to the large concentrated wealth investors  they will always say equities have value in the long term and they always go up. 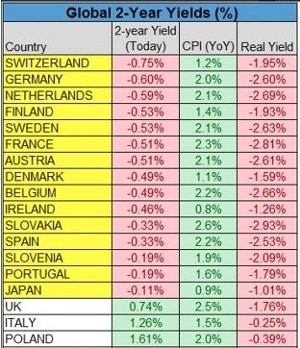 That is their sales tactic, what they won’t tell you is that it all depends on exactly when you start to invest. So, in order for asset prices to continue to rise, debt will have to continue to expand and all players involved will have to take on increasingly larger and larger loads.

The flipside of all this is that interest rates can never rise, at least without destroying asset prices. You cut off the debt, you cut off the Ponzi and all the cards fall, period! The Fed knows it and so does every other central bank in the world. The chart of global 2-year yields from Pension Partners Charlie Bilello, should drive home this reality.

By the way, when you pay a central bank money to hold your money, well it no longer becomes a zero-sum game then does it.

You are paying them money to take risk and even if they lose, it wasn’t theirs to begin with, but hey, keep paying them to hold capital, under the guise of safety.

I would rather stockpile gold bars or melt them all into one gigantic boulder, knowing full well, you would need a crane to steal it!

We laughed when we saw Statista’s new chart.

Social media’s trust level among consumers is now lower than the IRS, that is truly a new benchmark for futility: 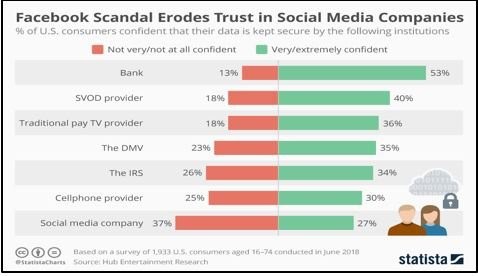 We are glad to see the Fall season upon us, the year is flying by, we look forward to continuing this exciting journey with you.