The monthly S&P 500 Emini futures candlestick chart broke to a new all-time high last week. I said that the monthly chart had never been as climactic as it was in its 100 years. The 15-bar bull micro channel was a sign of extremely strong bulls, says Dr. Al Brooks. 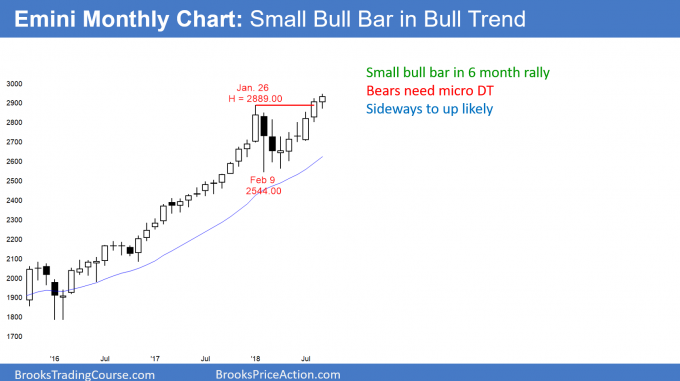 The candlestick on the monthly S&P 500 Emini futures candlestick chart is a small bull doji so far in September. However, it made a new all-time high and the 6-month rally is strong.

I wrote that when there is a reversal it typically lasts 1 – 3 months and then the bull trend resumes. But, the bulls are usually still somewhat exhausted. Once they get a new high, there is usually another pullback within a few months.

So far, the monthly chart is behaving as it typically does. It will probably continue higher for at least a few months before the bears will be able to get more than a 1-month pullback. After 6 months without a pullback, the bulls will buy the 1st pullback below the prior month’s low. Consequently, the downside risk over the next couple of months is small.

There are measured move targets above at around 3100 and 3200. I drew them on the weekly chart. The momentum up on the monthly chart is strong enough for the bulls to get to at least 3100 within the next several months.

There is always a bear case. However, there is only a 30% chance of a strong reversal down lasting 3 or more months without first seeing a micro double top. 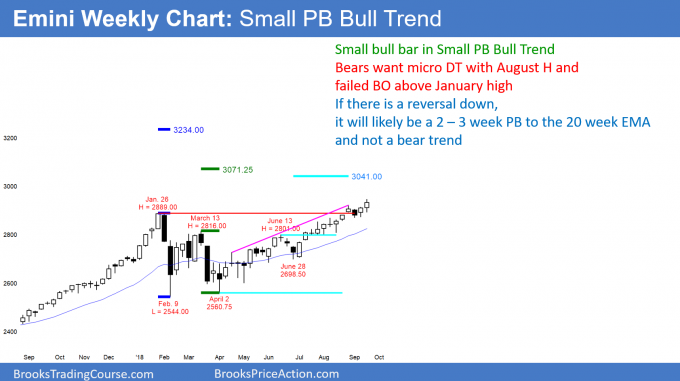 The weekly S&P 500 Emini futures candlestick chart broke to another all-time high last week. Because the bull channel is tight, the odds favor sideways to up this week.

The weekly S&P 500 Emini futures candlestick chart has been in a tight bull channel since the April low. There are measured move targets above at around 3100 and 3200. Also, the 3,000 Big Round Number is a magnet above. Can this rally get vacuumed up to the targets without more than a 3-week pullback? Probably not, but it should reach the targets within a few months.

The bears will need at least a micro double top before they can get a reversal down to the 20-week EMA. That support is currently around 2820. If the Emini reverses down this week or next week, it will form a higher high micro double top with the August 28 high. That could lead to a test down to the 20 week EMA.

The bears want to sell below a bear bar that closes near its low. Therefore, if this week sells off on Wednesday’s FOMC announcement, next week could be a sell signal bar.

However, every pullback since the January high has ended within three weeks. Consequently, the next selloff will probably not last much more than that. The odds favor a continued bull trend up to the measured move targets at around 3100.

The daily S&P 500 Emini futures candlestick chart gapped up on Thursday to a new all-time high. Friday had a bear body and was therefore a bad follow-through day.

The daily S&P 500 Emini futures candlestick chart gapped up on Thursday. Friday was a reminder that the 2-week rally is failing to get consecutive strong bull bars. It might therefore be a bull leg in a trading range instead of a successful breakout above the August high. If so, the Emini will begin to test higher lows within 2 weeks.

Since Friday had a bear body, the bulls need follow-through buying early next week to erase Friday’s bearishness. Because there is uncertainty ahead of Wednesday’s FOMC announcement, the Emini might continue sideways until then.

If the bulls get strong bull bars next week, the next target is the top of the bull channel, which is around 2970, and then the 3,000 Big Round Number. Above that are the measured move targets on the weekly chart.

The bears want a reversal down from a failed breakout above the August high. Since Friday was a bear day and it closed near its low, it is a sell signal bar for Monday. However, the bull channel on the daily chart since September 7 is tight. That makes the sell signal minor. It is more likely to lead to a pullback than a bear trend. The first target is the higher of the 2 bull trend lines, and then the September 7 higher low of 2870.00.

Wednesday could be a catalyst for a few bear days. If the bears start to get bear bars closing on their lows on the daily chart, they will create a sell signal bar on the weekly chart. That could lead to a test of the 20-week EMA.

Any gap down next week would create an island top with Thursday’s gap up. If instead the Emini simply trades below Wednesday’s high, the bears will have turned the gap up into an exhaustion gap, like the gaps of August 27 and September 13.

However, island tops and exhaustion gaps are minor reversal patterns. They only rarely lead to bear trends. Consequently, even of the bears get several weeks down, the selloff will probably simply be a bear leg in the bull channel that began in April.

For traders to believe that the bears have taken control and the selloff will reach the February low, they need several big bear bars. Without that, the bulls will buy the selloff and any reversal up. There is currently only a 30% chance of a break below the February low before reaching 3,100.

Gloom and Boom
9 hours ago