Baker Hughes (BHGE), the oil-and-gas giant majority-owned by General Electric (GE), has skidded lower on the charts lately. Shares are resting heavily on their YTD breakeven at $31.64, which has been breached on multiple times since late July, writes Elizabeth Harrow.

This level roughly coincides with what appears to be the lower rail of a still-developing descending triangle, with this bearish continuation pattern created in combination with a series of lower highs for BHGE dating back to May.

According to historical data from Schaeffer’s Senior Quantitative Analyst Rocky White, that's bad news for Baker Hughes shares. Over the past three years, there have been no fewer than 11 prior instances of BHGE rising up to within one standard deviation of its 80-day moving average after a prolonged period of trading below it -- and following those previous rallies up to its 80-day, BHGE tends to underperform.

Specifically, five days after testing resistance at its 80-day trendline, BHGE’s average return stands at a loss of 1.50%, with only 36% of the returns positive. Looking out 21 days after a signal, the equity’s returns remain at a dismal 36% positive, and the average return deteriorates to a loss of 2.83%. 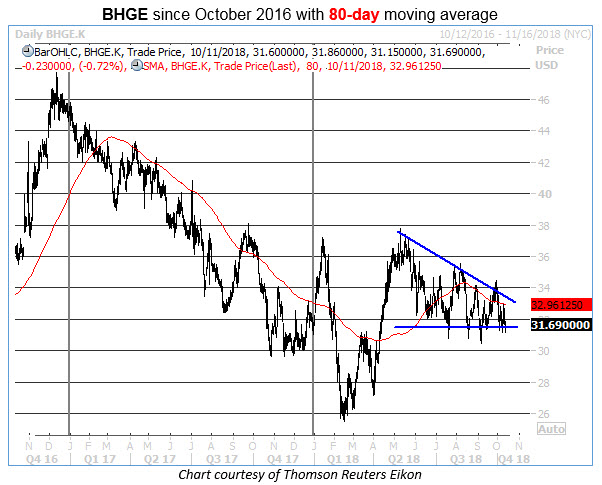 If history repeats, it would seem that there’s no relief in sight for the stock in the days ahead.

Short sellers appear to be anticipating more downside, as these bears upped their exposure to BHGE by 3.3% in the most recent reporting period. Short interest now accounts for 5.9% of the stock’s float, or 9.1 times BHGE’s average daily trading volume. In the weeks ahead, a continued increase in shorting activity could provide a stiff headwind for the oilfield services stock.

Meanwhile, analyst downgrades could soon be inevitable. Despite the equity’s dismal price action, there are still 13 Buy or better ratings for BHGE, compared to three Hold and zero Sell. Any negative notes from this group could spark fresh selling pressure for the shares.

With the company set to report quarterly earnings in late October, short-term options on Baker Hughes are pricing in higher-than-usual volatility expectations -- which means it’s more expensive than usual to bet on the stock’s directional move over the next few weeks.

Many investors and traders are looking at the market and wondering how in the heck they can continue...