While the euro seems primed for a breakout in either direction, the current trend is to drift lower.

The EURUSD currency pair has been in a tight trading range for four months. However, since the bulls have been unable to get consecutive closes above the 20-week exponential moving average, a bear breakout is slightly more likely than a bull breakout.

The EURUSD daily Forex chart has been in a tight trading range. It has reversed directions every two to three weeks during that time. It is still in Breakout Mode (see chart). 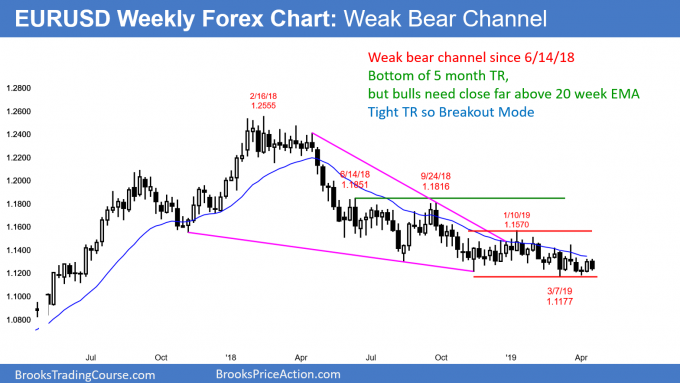 Typically, the probability of the breakout for the bulls and for the bears is 50%. However, the chart continues to make at least slightly lower highs and lows. In addition, it has not had consecutive closes above the 20-week exponential moving average in over a year. Consequently, the bears have a slightly higher chance of a downside breakout.

But, not much. If there was a clear consensus among traders that there would be a bear breakout, the breakout would be underway. The lack of a breakout indicates that the bulls have almost the same chance as the bears.

Traders need to see consecutive closes above or below the range before concluding that the trading range has converted into a trend. Until then, they will continue to look for reversals every two to three weeks.

Fed Chairman Powell may have signaled a reversal in the dollar trend vs. the euro, reports Matt Well...

The QuantCycles Oscillator is showing a potential major reversal in the Euro currency, reports John ...