Jobs Preview: Traders More "In the Dark" Than Usual

A preview of tomorrow’s Employment Situation Report by Matt Weller.

Time flies when you’re having fun, and sure enough, it’s already time for another Employment situation report.

Last month’s reading on the U.S. labor market was most remarkable for how unremarkable it was. The combination of a slight beat on headline job growth and a slight miss in wage growth led to one of the most subdued market reactions in recent memory, with the U.S. dollar, U.S. stock indices, gold, and two-year treasury yields all moving less than 0.1% on the release. After Fed Chairman Powell reiterated the central bank’s data-dependent stance yesterday, we expect more volatility around this month’s NFP report.

Heading into the release, economists are looking for net job growth of 181k, with average hourly earnings expected to rise 0.3% and the unemployment rate anticipated to hold steady at 3.8%. Over the last three months, the U.S. economy has created an average of exactly 180k new jobs, so the market is essentially projecting another steady-but-unimpressive reading.

Predicting a single month’s nonfarm payroll reading is always a tough endeavor, and the task is even more difficult this month because one of our favorite “leading” indicators, the ISM Services PMI report, is scheduled for release 90 minutes after the jobs report. Nonetheless, the other leading indicators for NFP paint a mixed picture: 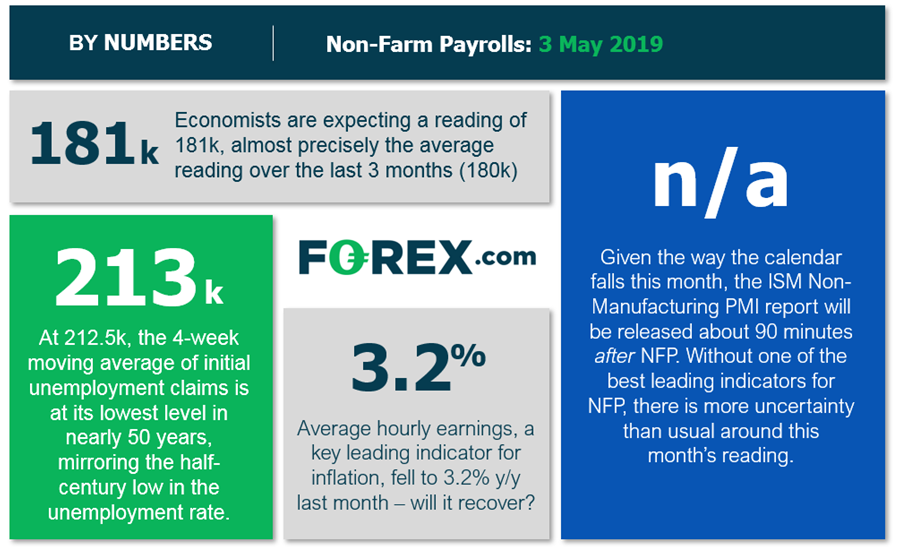 The historically low reading on initial unemployment claims and the strong ADP employment report have us leaning toward a better-than-expected report, albeit with more uncertainty than usual given the lack of the Services PMI survey.

That said, Chairman Powell was at pains to note that the central bank doesn’t “see a strong case for moving in either direction” at present, so even a strong report is unlikely to lead to a dramatic market move. As we noted last month, the medium-term momentum in U.S. indices is strongly bullish, so stock traders may be inclined to interpret the jobs report as supportive of stocks, regardless of the exact reading. Finally, readers should note that the unemployment rate and (especially) the wages component of the report will also influence how traders interpret the strength of the reading.

In the event the jobs and the wage data beat expectations, then we would favor looking for short-term bullish setups on the dollar against the likes of the British pound given the ongoing Brexit uncertainty in the UK. But if the jobs data misses expectations, then we would favor looking for bearish setups on the dollar against a currency like the Aussie dollar, as it could serve as a catalyst for more “risk on” sentiment on the theory that the Fed may have to cut interest rates later this year.