Market Bears are Running out of Opportunities

Equity and energy markets digested some big geopolitical risk with no problem and no panic, suggesting it is not in the mood to go down, notes Jeff Greenblatt.

The Federal Reserve’s Open Markets Committee (FOMC) dropped rates a quarter point and the Dow promptly dropped 200 points. Not exactly the response bulls were hoping for. Bears? They’ll take anything they can get. September hasn’t gone the way they thought. They even got a mini black swan handed to them over the weekend and they still couldn’t make it stick.

That’s exactly what it was. Pundits, politicians, economists as well as regular folks like you and I have speculated for 50 years on what would happen if Middle East oil production was ever sabotaged by an act of war. There it was and markets weren’t even down that much. Is it because the market is so complacent, they don’t believe the danger of the situation? Do they know something we don’t? Or is it a case of normalcy bias? The truth at this point is our side believes Iran is responsible but have been incredibly restrained with not even a measured response to this point.

I’m not going to speculate on what may or may not happen. All I can tell you is the same thing I’ve told you for two years. Geopolitical risk is high and going to remain so. This gets us to my next theme. All the quantitative easing (QE) in the world isn’t going to help this time. It has been a major theme of these weekly discussions since it became apparent the Fed would start cutting rates in July. Think about this: If oil did stay up by roughly 10%, we can approximate the price at the pump could go up around 25¢ to 30¢ per gallon. If you buy 10 gallons that amounts to an extra $3. Depending on where you live that could last a week or a couple of days. Let’s just say in a consumer driven economy the average person would spend an extra $25 to $30 a month on gas. That amounts to more than $300 a year which experts tell us would negate the effects of the tax cut on the middle-class Trump gave in 2018. Now you can understand why recessions have usually followed oil spikes since the 1970s.

Now you can also appreciate why all the QE in the world won’t help this time and why the market’s kneejerk reaction was lower coming out of this rate cut. Here’s another reason why it might not work. Did you see where the 10-year note and 30-year bond stalled late this morning. They’ve been in a downtrend for three weeks already but started the usual bounce against the drop on Monday. As bond prices go higher, longer rates drop. The bounce stalled within the hour of the Fed announcement. This may be good news for the yield curve inversion but in the long term the economy will have a tough time absorbing higher gas prices as well as interest rates.

So, here’s what I’m watching at this critical point for September. The Nasdaq 100 chart is an excellent proxy because it topped in the 987-day window back to the 2015 low on the day Google (GOOG) went through the roof on earnings (see chart below). You’ll recall it was up around 100 and change in the aftermarket but that was it. That leg was up 1091 points. Then from the early August low it was up 619 points (golden spiral 618) and 92% as a retracement. In the world of vibrations and square outs, the 1091 and 92% follow up is called replication of a vibration, which is where the uptrend stalled. Since we are done with the 618-week window to the Nasdaq top in 2007, the bears need to get going as this setup is their last best hope. 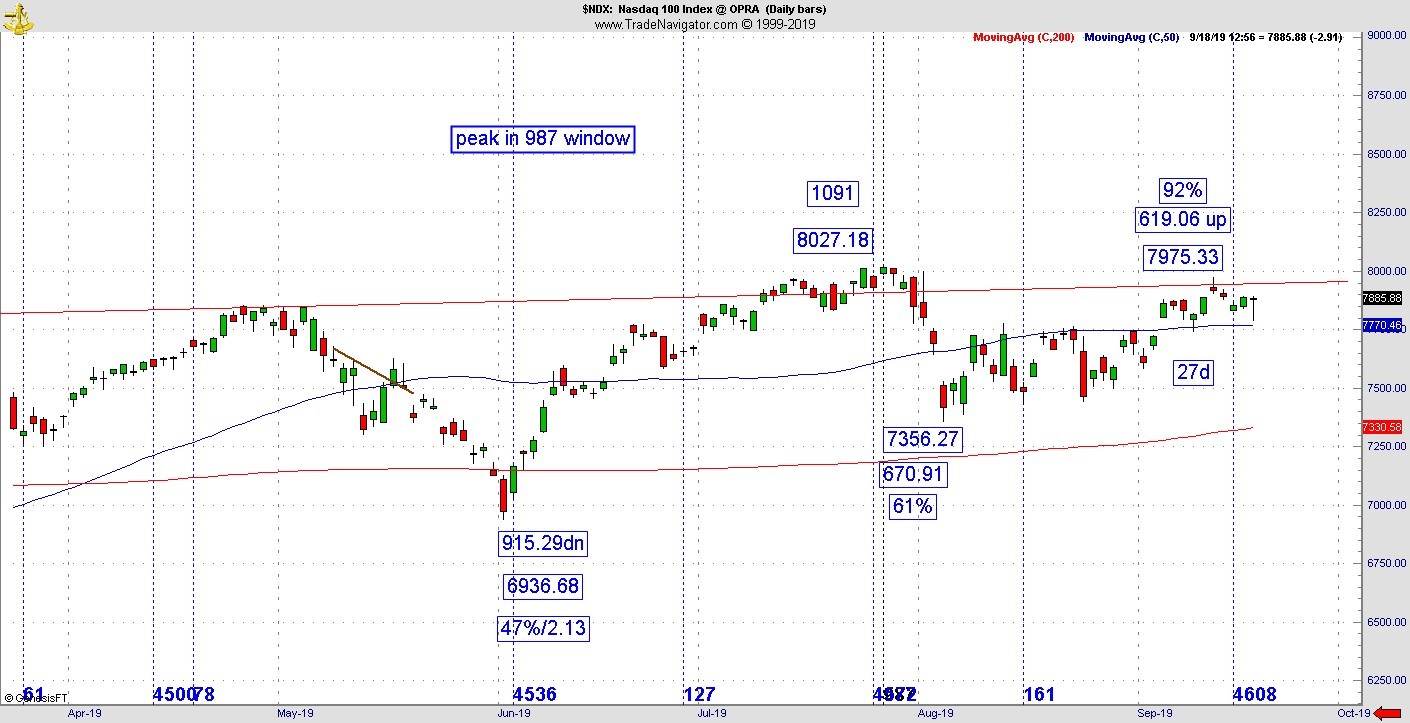 Putting it another way, if an oil spike because of a geopolitical event and a kneejerk reaction to the downside can’t stick, the market doesn’t want to go down. Suddenly the 200-point drop turned back to 60 and eventually the Dow was ahead.  If it’s going, it needs to go. If they can’t drop on a setup like this, then we are looking at a short squeeze.

It doesn’t look good for bears at this point. Finally, lets crack the code on how the market turned back up. This is an excellent Kairos lesson. From the prior low its 605 points up and then to the low before the Fed event it was 330 points down which is a 55% retracement (see chart below). From that pivot to the volatility after the Fed event, it was 56 bars. That’s not a coincidence, but a tendency that happens all the time in financial markets, but people don’t realize it. 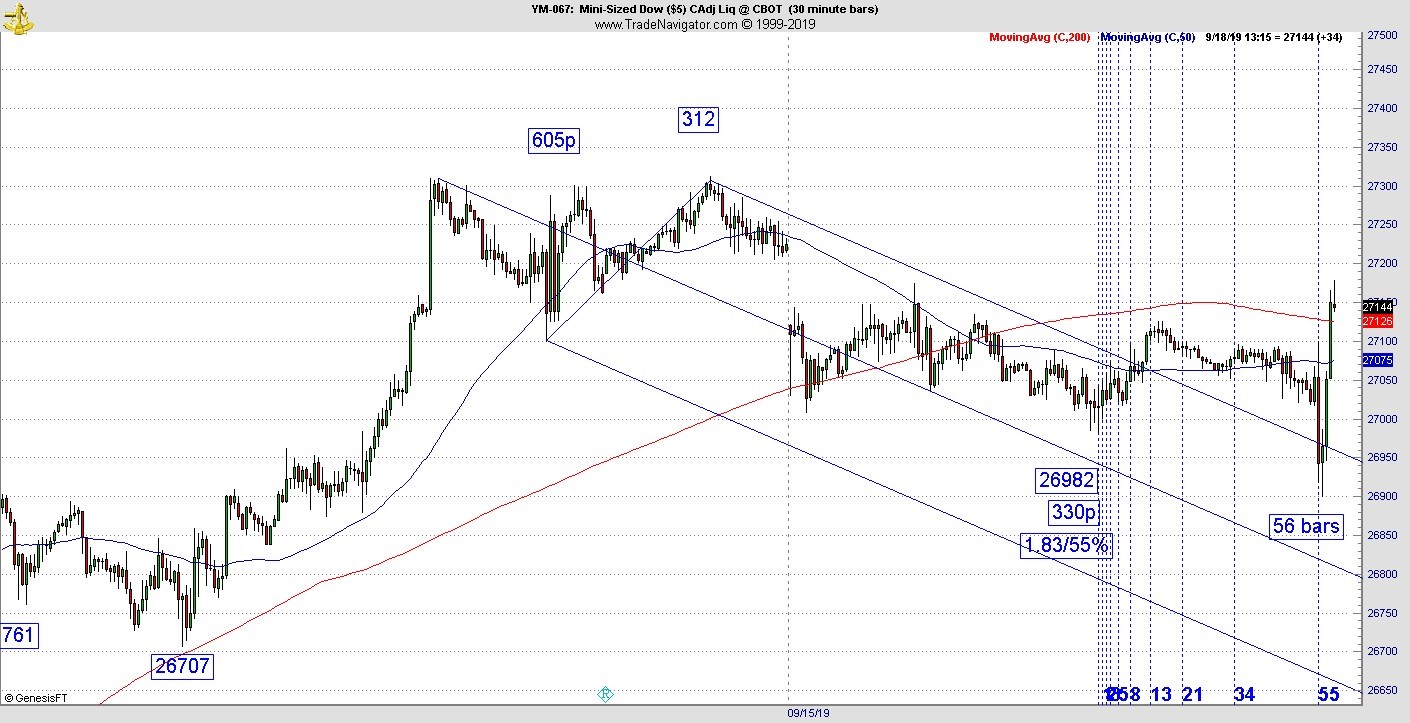 Preseason games in the NHL just started and the next thing you know September will be over. With it, will be the bears best chance this year.

Can Warren Buffett Save Natural Gas?
3 hours ago

The Oracle of Omaha is getting into the energy market, reports Phil Flynn....

Market Volatility Ahead?
10 hours ago

It’s time to rotate out of higher volatility stock ETFs into safer assets, according to Joon C...

While S&P Looks to Test 2700, Sell Signal is Weak and May only produce minor initial sell-off, r...