The EURUSD currency pair is in a four-day tight trading range in the middle of a five-month trading range. More sideways price action is likely.

The weekly chart in the EURUSD currency pair reversed up last week from a small higher low (see chart). But the previous week was only a doji bar, which is a weak buy signal bar. Although last week had a bull body, there was a big tail on top. Therefore, the EURUSD will probably stay in its four-week trading range for at least another week. 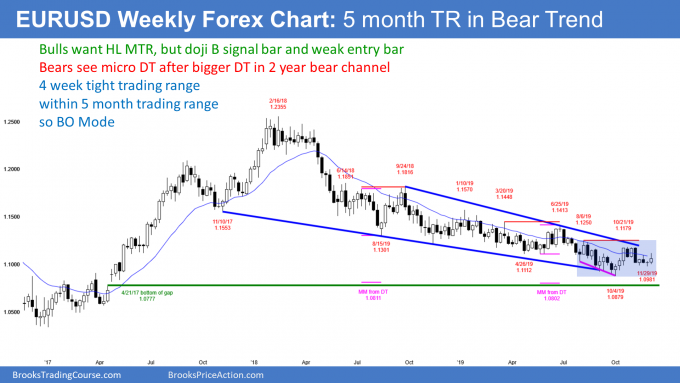 Since the October rally was the strongest rally on the weekly chart in two years, the bulls expect a second leg up. This is especially true since the reversal up on Oct. 1 was from a nested wedge bottom. The bulls hope that this week was the start of that second leg up. However, sideways is more likely than up for next week.

The first target for the bulls is the Oct. 21 high, which was the top of the first leg up. It is also around other targets, like the 15-month bear trend line and the 1.12 Big Round Number.

What about the bears?

The EURUSD has been forming a series of new lows for two years. Traders have been selling every two- to three-week rally, betting that each would be a bull leg in the bear channel.

This has been a very good strategy. The bears will continue to sell 200- to 300-pip rallies until they believe that the bear trend has ended.

One sign of that would be if the bulls get consecutive closes above a major lower high. Is the October high major enough? For some computers, yes.

A more important lower high is the June 25 high of 1.1413. If the bulls get two closes above that high, traders will conclude that the bear trend has ended. They would then look at the chart as being in either a trading range or a bull trend.