BoE Acts as London Looks to Lock Down

The Bank of England tries to stop the bleeding in the British pound; DAX stabilizes, reports Fiona Cincotta.

The British pound (GBP/USD)  rebounded Thursday after Wednesday’s bloodbath, thanks to another move by the Bank of England.

BoE Governor Andrew Bailey has hit the ground running, just three days into his new jobs, cutting interest rates by an additional 0.1% and adding £200 million ($230.64 million) in QE in an attempt to offset the economic impact of Coronavirus. His move comes following former Governor Mark Carney’s slashing of rates by 50 basis points earlier in the month and as central banks across the globe ramp up their response to the coronavirus impact.

The BoE’s move is being well received amid depressing news elsewhere. According to Ipsos MORI survey UK economic optimism is now at the lowest level since 2008’s financial crisis. Add into the mix news that Londoners are facing an imminent lock down as the capital is ahead of the curve on Coronavirus cases plus concerns over how the UK will afford the virus responses it’s easy to see why demand for pound has been waning. And Chief EU negotiator Michel Barnier has tested positive for coronavirus.

A lock down of London the hub of foreign exchange trading is unprecedented territory. The impact that the lock down of the UK capital will have on the UK economy will be huge. When Coronavirus broke out there were serious concerns of the supply shock that could follow. However, what is clear now is that the demand shock that the coronavirus outbreak and a London lock down will bring will be astonishing.

U.S. Dollar strength has also been responsible for the collapse of cable to the lowest level since 1985. Demand for the dollar continues to rise despite the Federal Reserve’s latest attempt to ease turmoil in money markets.

The dollar is not rising on improving prospects for the U.S. economy. Quite the opposite. The outlook for the U.S. economy is terrible. The latest U.S. jobless claims report a surge in people who have been laid off in recent days. These are primarily state labor agencies as cities shut down to halt the spread of Coronavirus. The data comes a day after Treasury Secretary Steve Mnuchin warned that U.S. jobless rate could soar to 20%. These figures would typically be bearish the dollar, instead they are fueling the safe haven trade.

GBP/USD is trading at the top the day’s trading range, through $1.1700, although the down trend remains intact on 1 hour chart.

Immediate resistance can be seen at $1.1735 (today’s high) prior to $1.18 (50-day simple moving average) a break above this level could negate the short-term bearish trend. 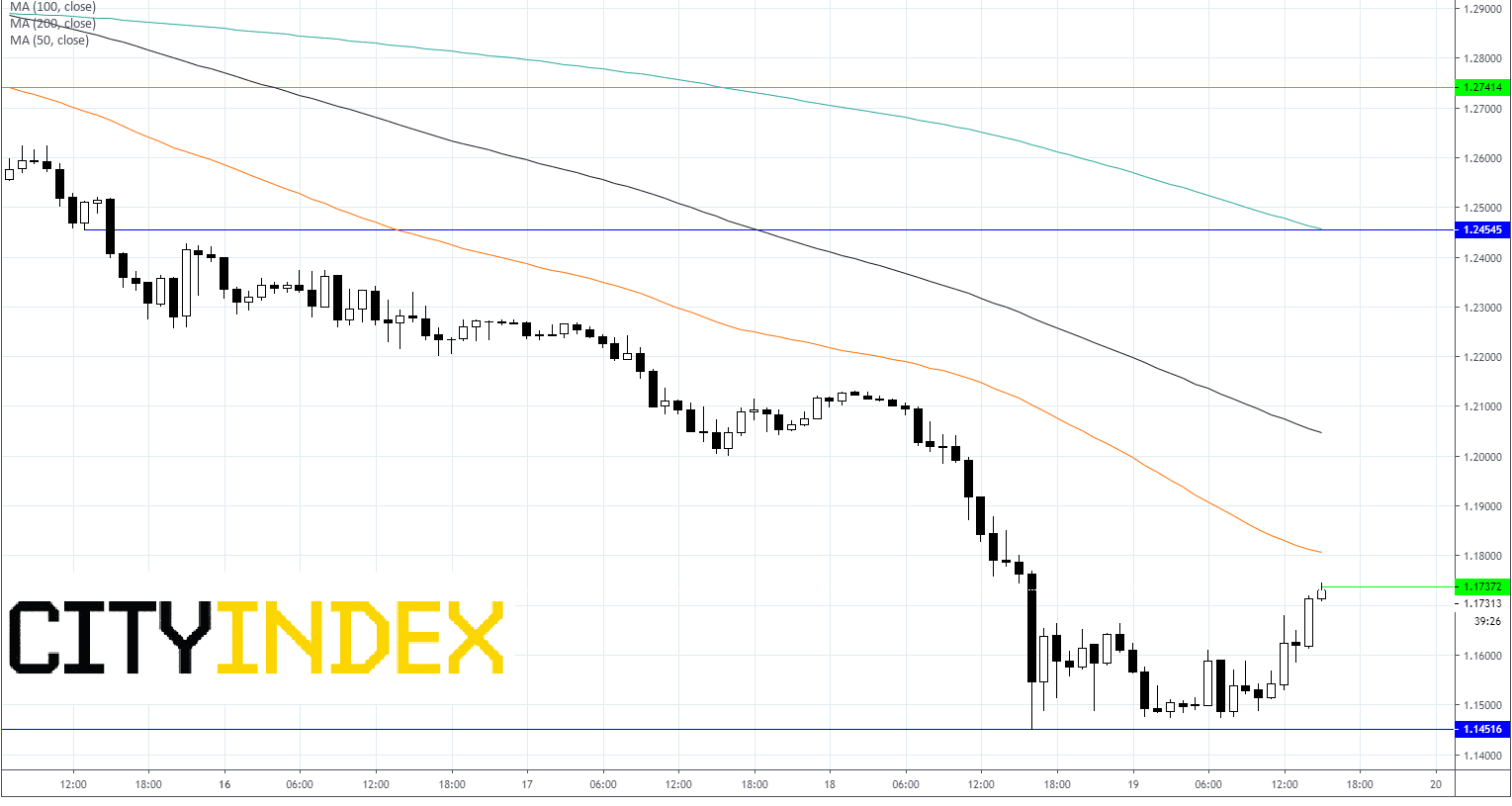 After yet another historic selloff Wednesday, which saw equities, bonds and crude oil take a hammering as investors liquidated into cash, Thursday showed signs that the sell off at least could be slowing. European indices are pointing to stabilization.

Wednesday the Reserve Bank of Australia cut its key interest rate by an additional 25 basis points to 0.25% and adopted a Japanese style yield control among a raft of other measures, to shore up the Australian economy.

The move came following the announcement of €750 billion ($801.52 billion) bond purchases by the ECB, in a bid to stabilize the economy and capital markets. This is an all-in program and Christine Lagarde’s “whatever it takes” moment. The Fed also said that it was launching a program to support money making mutual funds after slashing interest rates to near zero at the start of the week.

Central banks have thrown what they have at the Coronavirus pandemic issue. Governments have also been doing their part. Last night the U.S. Senate cleared an economic relief package that will provide paid sick leave, food assistance and financial help for virus testing. The move came after the UK government pledged £330 billion ($402.95 billion) to support business.

However, these pledges of support come as the number of cases continue to grow exponentially in Europe and in the United States and as the governments also put in increasingly stringent measures in place to prevent the spread of Coronavirus. These very measures will create a huge demand shock and eye watering levels of contraction. A recession is inevitable, the question is whether the fiscal and monetary support can prevent a depression.

The fact that the DAX remains in negative territory implies that traders are dubious over whether these moves are enough. However, the selloff does appear to be slowing suggesting that they are at least considering it (see chart). 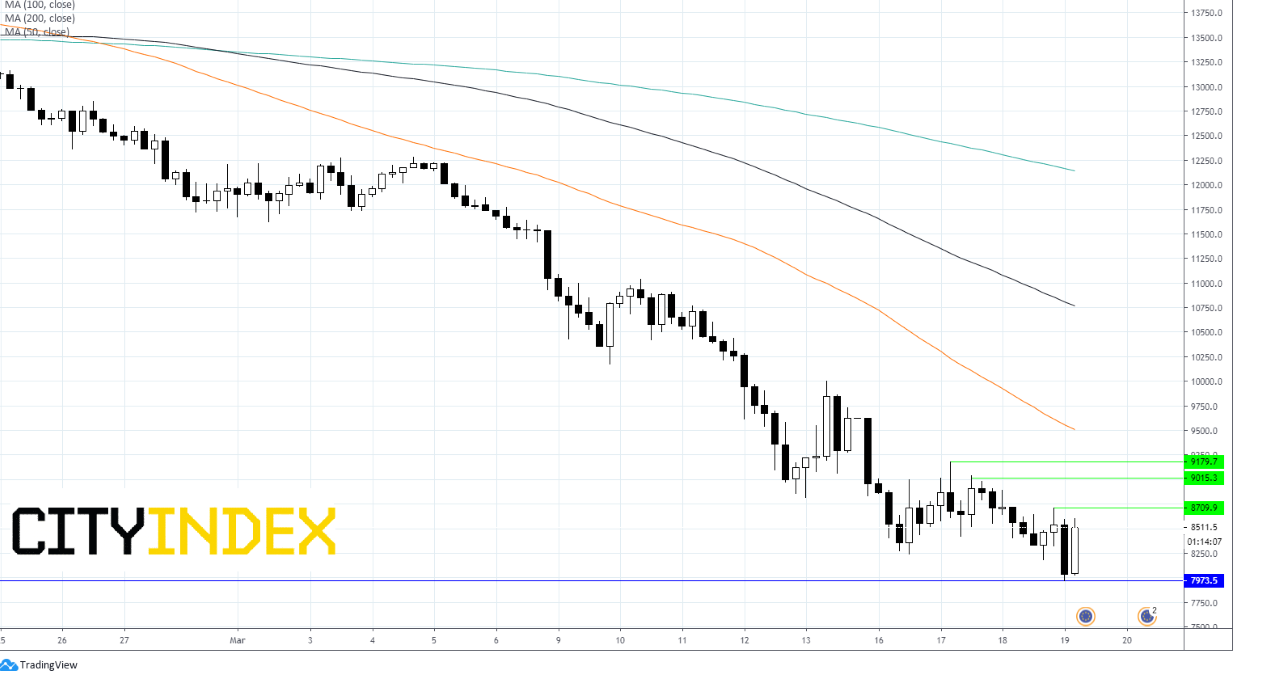 Why you need to pay attention to the Aussie/Yen currency pair, notes Fawad Razaqzada....

The double top in the euro indicates weakness, but longer term it could breakout in either direction...

As markets shift attention to the details of reopening global economies, can the Eurozone safely reo...