The Song Remains the Same

2021 was bullish with bouts of brutal volatility. 2022 is singing from the same song sheet so far, states Steve Reitmeister, editor of Reitmeister Total Return.

Let’s get right to the heart of the matter.

The bull market was doing just fine to start off 2022 with some nice positive sessions. And then came the Fed minutes on Wednesday, 1/5, and a nasty sell- off commenced.

This is BEYOND comical to me. That’s because the Fed has been BEYOND clear on its intentions to raise rates in the future.

First, by ending their $120 billion per month bond-buying program. Next to trim their $9 trillion balance sheet by selling more bonds. And then likely to raise rates a few times in 2022.

This has been CLEARLY signaled to investors many times over. And each time it happens traders act like it’s the first time leading to a sell-off...leading to a bounce...leading to making new highs once again.

In fact, I have talked about it in my commentary on numerous occasions. Most recently was end of September 2021. And before that on 8/24/21.

I want you to read the September commentary exactly as stated back then with no edits. That’s because it is the best way to explain why it was so absurd back then when the S&P was at 4,352...and today stands over 4,700.  And thus, just as absurd today as it is nothing more than a silly speed bump before the market makes new highs once again:

“What is a “Taper Tantrum”?

This is an overdone stock market sell off that begins when the Fed first signals that they plan to take actions that will raise rates. This gets some hyperactive traders to start selling immediately because they foresee that the tide has turned and there will be more Fed actions to raise rates in the future.

This reaction sounds logical on the surface. But is completely insane given all historical reference points which we will dig into below.

More to the point, when the Fed shifts to a more hawkish view (less accommodation with higher rates likely to follow) the stock market typically goes up for two-three more years afterwards. That is the norm.

In this case, rates are so far below normal...that it may take a lot longer than two-three years for higher rates to cramp the economy and stock market. Thus, to have any kind of sell off now is irrational and borderline insane.

Here is a chart going back over 35 years and four bear markets (the gray vertical bars). See how long before the bear markets arrive that the Fed starts moving rates higher. And see how high rates had to go before the bear market began. Meaning the ticker tantrum sell off last week was a downright JOKE. Thus, not a surprise how quickly stocks have rebounded since.

Then it begs the question; Why do these illogical market reactions happen so often?

It comes down to the difference between traders and investors. In particular day traders and computer-based trading is a world view compressed to just seconds and minutes. That is opposed to the months or years that the typical investor contemplates.

When your time horizon is that compacted, then you are hyper vigilant to the headlines. There the view becomes binary such as:

These decisions are instant and reflexive with no care or concern for the longer-term ramifications. Indeed, looking at the chart above, last week’s sell off would be like bailing out of the stock market in 1994 at the first sign of Fed rate hikes even though there was six more years of glorious stock gains to follow. 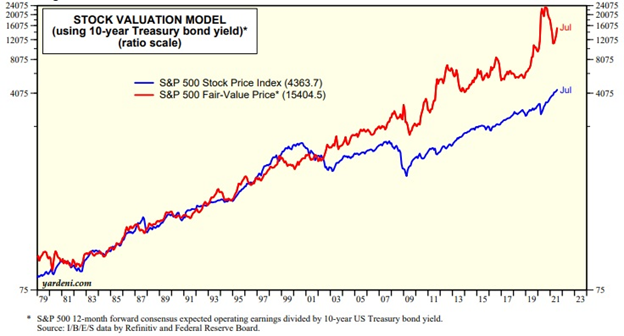 I think you see my point. That rates are so incredibly low creating an undeniable value story for stocks that will NOT be undone anytime soon.

This does not mean to take a second mortgage on your house to put in the stock market.

This does not mean the stock market will just go up and up and up.

This does not mean that there will not be other extended sell-offs here or there along the way.

It simply means that the long-term market outlook is bullish till proven otherwise. And to undo that we would need to see some great threat to the economy that meant recession with subsequent bear market. Virtually nothing taking place right now points to that outcome, which is why a bullish bias is warranted.

Having that clear eyed view in place allowed us to unflinchingly stay in our stocks during the taper tantrum to enjoy some pretty impressive gains since.”