This month (so far) has been the worst for the Nasdaq since the stock market was in the throes of the Great Financial Crisis back in 2008, states Jesse Felder of TheFelderReport.com.

It shouldn’t be hard to understand what is plaguing the Big Tech stocks that make up the bulk of this index. In addition to capital flows, macroeconomic trends, risk appetites, and insider activity, all of which warned of the current weakness in stock prices well ahead of time, there are two major bearish forces at work. I wrote that six months ago and, if you change “month” in the first sentence to “year,” it is just as true today as it was back then.

Put the market caps together of Microsoft (MSFT), Apple (AAPL), Nvidia (NVDA), Tesla (TSLA), and Amazon (AMZN) and compare that figure with their aggregate free cash flow and you get a multiple of over 50 times, down from nearly 70 at the start of the year. This historic level of overvaluation was only made possible by massive money printing on the part of the Fed that supported both cash flows and the multiple applied to them. Now that inflation is raging, however, the money printer has been shifted into reverse and that’s already having a visible impact (both “bearish forces,” the reversion in valuations and falling liquidity, have been consolidated into one chart this time below). 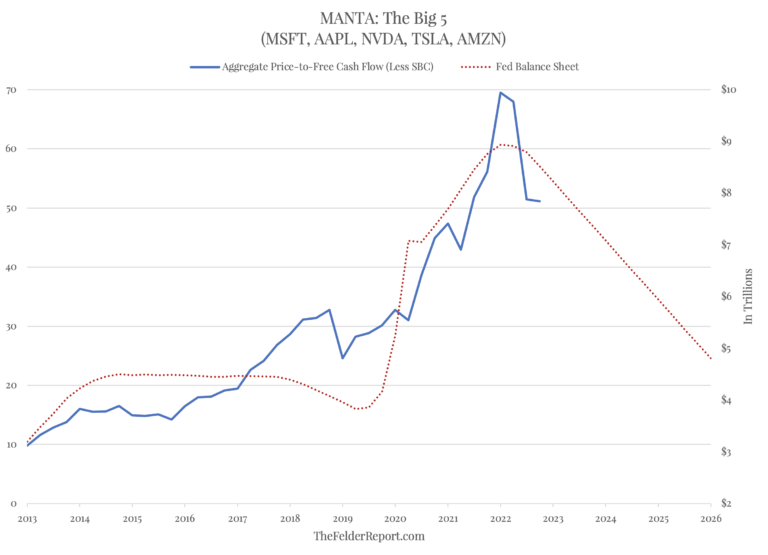 Furthermore, if the Fed follows through on its commitment to normalize the balance sheet over the next few years then this reversion in valuations has only just begun. In fact, price-to-free cash flow ratios could still halve from their current levels. Of course, if free cash flow (the denominator in the valuation ratio) continues to grow as it has over the past decade, this process will be much less painful than if free cash flow also goes into reverse. Worryingly, that reversal in cash flows is actually what has happened over the past year in which growth went from double-digits positive to double-digits negative.

As I wrote in the prior piece, “Considering the nature of the pandemic and the stimulus enacted as a result, it’s not unreasonable to think there was a significant pulling forward of demand for Big Tech products and services that will now leave a vacuum of demand for a prolonged period of time.” We’re just now beginning to find out how much of a vacuum of demand now lies in front of us. And a Fed-induced recession resulting from the rapid rise in interest rates and draining of liquidity isn’t likely to improve things in that regard.