US Global: Bullish on Commodities, Gold and Franco-Nevada

Since the commodities supercycle unwound nearly 10 years ago, many investors have been waiting for the right conditions to trigger mean reversion and lift prices. I believe those conditions are either firmly in place right now or, at the very least, in their early stages, explains Frank Holmes, CEO and US Global Investors and editor of Frank Talk.

In addition, nearly 60 percent of money managers surveyed by Bank of America Merrill Lynch believe 2018 could be the peak year for stocks. A recent J.P. Morgan survey found that three quarters of ultra-high net worth individuals forecast a U.S. recession in the next two years.

All of this makes the investment case for commodities, gold and energy more compelling than at any other time in recent memory.

Exhibit A is the chart below. Relative to equities, commodities are as cheap right now as they’ve been in decades. This is literally a once-in-a-generation opportunity that investors with a long-term view should seriously consider.

For perspective, had you invested in a fund tracking the S&P GSCI or an equivalent commodities index in 2000, you would have seen a compound annual growth rate (CAGR) of around 10 percent for the next 10 years, according to Bloomberg data.

We all know that past performance is no guarantee of future results, but it’s doubtful you’re going to get a clearer or more resounding signal that now could be an ideal time to add to your commodities exposure. If you feel as if you’ve been stuck at a traffic light these past few years, just waiting to put your foot on the accelerator, you can breathe a sigh of relief because the light may have just turned green.

Since the price of gold fell from its highs in 2011, producers have needed more capital to cover increasing costs. This is where precious metal royalty and streaming companies have come into play.

These companies help finance explorers and producers’ operations by buying royalties or rights to a stream. Because gold miners have had to slash exploration budgets since the decline in metal prices, the kind of financing royalty companies provide has only grown in demand.

Chief among these companies is Franco-Nevada (FNV), which recently celebrated the 10-year anniversary of its initial public offering (IPO). Since the company went public in 2008, it’s raised its dividend each year and its share price has outperformed gold bullion and gold miners, as measured by the S&P/TSX Global Gold Index, due to its unique structure and debt-free model. 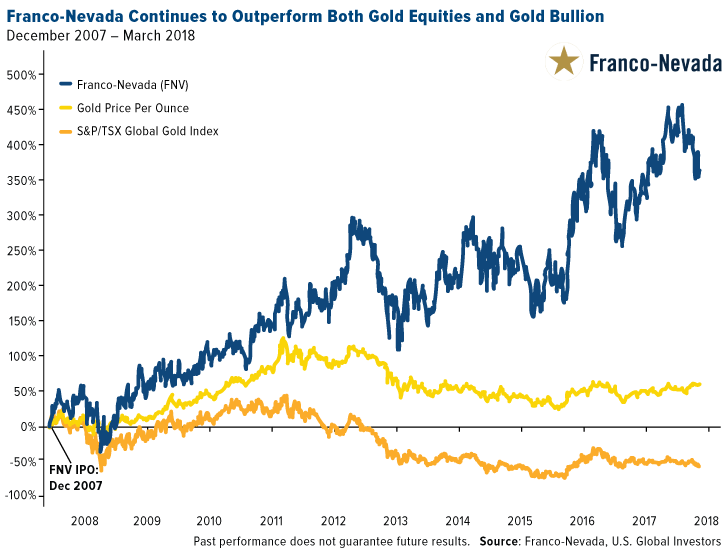 In its 2017 results release, Franco-Nevada CEO David Harquail announced that the company’s 10th full year since its IPO was its best year ever, remains debt free and is “well positioned for another 10 years of success.” The company reported $675 million in revenue, a 10.6 percent increase year-over-year and basic earnings per share (EPS) of $1.06, a massive increase from 2016 of $0.70 per share.

For its 2018 projections, Franco-Nevada expects attributable royalty and stream production to total 460,000 to 490,000 GEOs (gold equivalent ounces) from its mineral assets and revenue of over $50 million from its growing oil and gas assets.

This history of profitability and fiscal discipline is one of the main reasons we find royalty companies such as Franco-Nevada so attractive for investing.

Incidentally, Franco-Nevada is a holding in the US Global GO GOLD and Precious Metals Miners ETF (GOAU). This is a dynamic, rules-based ETF that seeks to invest in both junior and senior metal miners with strong balance sheets and skilled management teams. GOAU is unique for potentially having as much as a 30 percent weighting in gold royalty companies, such as Franco-Nevada.