Sponsored Content - The year that we just bade farewell to has arguably defied even more economic and market laws and maxims than did 2020, says Chris Temple, editor and publisher, National Investor Publishing.

We have had a longer period of negative real interest rates than at any time in history. The money supply has exploded; and inflation is at a 40-year high by one measure. Yet interest rates remain suppressed; and stocks as measured by the S&P 500 positively cheered that four decade-high inflation of 2021, soaring 27% on the year. So, 2021 indeed ended—and 2022 begins—with that “Wonderland” environment.

But Fed Chairman Jerome Powell has already indicated the second major policy reversal of his tenure; or so it seems. How and why he (and a chorus of other Fed heads as well as Treasury Secretary Janet Yellen for good measure) has so abruptly gone from dismissing inflation for months to worrying about it now (and indeed, changing his tune in a number of related ways) is something we need to get our heads around FAST in order to begin mapping out our portfolios’ game plan for 2022.

As we recap 2021, the most significant economic development of the year is that jump in producer and consumer prices. As of November, the rise of the latter year over year came in at 6.8%; the highest running 12-month tally in some four decades as you see in the chart below. 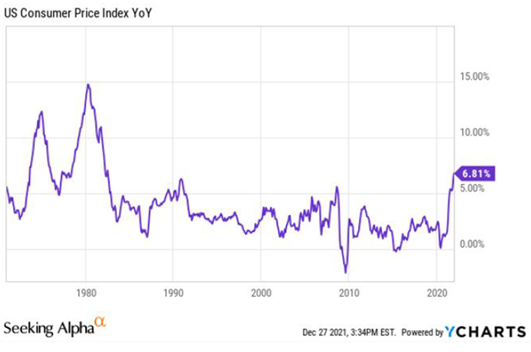 What is nearly as remarkable (so far) is that—though these surging living costs are hitting Joe Sixpack and Sally soccer mom sufficiently hard now that it is causing a major political headache for the Biden Administration—for investors this is mere water off a duck's back. Compared to that last major, sustained bout of price inflation 40 or so years ago, there is relatively little clamor for the Fed to “do something.“ Indeed, though everyone, their dog, and the fleas on the dog have known for a while what Federal Reserve Chairman Jerome Powell only recently admitted—that the central bank is way behind the curve on inflation—there is little worry. An incredible amount of blind faith remains in this man who has been spectacularly wrong in his prognostications; and will be again.

The latest of those is Powell's insistence that inflation will moderate in 2022. I suspect that it will near term, if for no other reason than that the recent rise in energy costs will take a breather. So for a spell, the statistics may bear out Powell’s rejiggered prediction. Indeed, if most everything goes right for a little while (for the bankers, anyhow), we could see that the recent 6.8% 12-month reading on the CPI was the peak, at least for a bit.

Here’s Where Things Will Stay “Sticky”

In the end it is MY prediction that—in the few months ahead—the CPI’s and PPI’s consolidation will see it staying well above the Fed’s purported long-run 2% target. Frankly, we will be fortunate if we plateau “down” (from recent levels) at 4% or so; a level so worrying back in the earlier 1970s that it prompted a series of (ultimately failed) wage and price controls from the Nixon Administration.

The “game changer” to drastically lower the recent inflation readings, of course, would be some kind of “market event” or crash. So far, the chief suspect that would bring that about—China, as it seeks to keep its “marketized default” of Evergrande under manageable control—appears to be unwinding this and related debt bubbles in an orderly and non-threatening (to global markets and institutions) fashion. Elsewhere, there always exists the possibility of a new deflationary crash; yet the world remains so awash in liquidity that such a thing is not my base case.

That aside, I think the US, at the least, is headed for a new period of stagflation as we called it back a generation ago. That, of course, will denote continuing elevated price inflation (certainly by standards of recent years) but flagging economic activity at the same time.

In calling for this base case of mine for some time, I have described my expectations of a “Stagflation Lite” kind of environment: generally similar to the 1970-early 1980’s time frame but without the extremes. Yet the odds of a considerably more “inflationary” environment price-wise for the citizenry have risen, even if we do see the headline numbers less bad for a little while as we begin 2022.

There are numerous reasons why the recent inflation will remain “sticky” and continue to put the lie to Powell's latest dismissive forecasts. In the days ahead I will be diving into these individually and in much greater detail for my audience; especially where the BIGGEST wild card—energy—is concerned. For present purposes, the main ones are:

So—whereas I was dismissive of such a prospect not that long ago—we do indeed now see the beginning of a 1970s-style wage-price spiral. Indeed, Powell, during the Q&A period of last month’s FOMC post-meeting presser, admitted in an unguarded moment the possibility that he might have gone so overboard as to unleash that very thing.

In any case, most companies sure seem to be of a mind to pass on the most significant increases in their prices in years right now. It will be most interesting to see how long this can last.

More shortages and then renewed, rising prices are ahead. There are credible forecasts for crude oil specifically moving well above $100/barrel in 2022.

(NOTE: Among many other things, I explained all this in my recent “Green manual.” If you’ve not seen a copy of my most important work in YEARS on all aspects of energy, the green movement, infrastructure and more—including profiles of a number of my recommendations—click here to download a copy.)

On top of what I've written recently, we will learn in the upcoming Senate confirmation hearings for Chairman Powell and Vice Chair-nominee Lael Brainerd late this month that the central bank will be expected to essentially add to its “mandate.” Next, progressives especially will push for the Fed to “support” a fairer shake in housing and elsewhere for minorities of all kinds…to do what Congress and the White House have failed to do and underwrite “green” initiatives…and more.

These themes won’t be new; for some time now, Powell has been harangued to make sure every “minority” can afford a home (they might be better able to if the Fed hadn’t blown such asset price bubbles, putting affordability out of reach!) Ditto, that the Fed “does something” to foster a greener economy.

On that latter, Powell has previously (and correctly) pointed out that this is technically not the Fed’s job. But that’s where Brainard comes in. The reason she has been tapped to succeed current Fed Vice Chairman Richard Clarida is that she is the heroine of progressives who believe she will make the Fed more so as well.

Around her will be the narrative that continuing net-“dovishness” by the Fed will be to make sure that the hoi polloi likewise benefit from all the money printing; not just those with fat stock portfolios and the ability to speculate in real estate and crypto currencies.

The Federal Open Mouth Committee Will Make Some Noise…But…

For all the recent, after-the-fact worry about inflation, keep in mind that the Fed is still expanding its bloated balance sheet (in round numbers, exploding to its present $9 trillion from the pre-Plannedemic $4 trillion) for the next couple months. After, it looks increasingly as if an initial federal funds rate hike could come as soon as March, with at least two others during 2022. Further—though no specific game plan on this has yet to emerge—it's generally believed the Fed will also allow maturing securities starting in early 2022 to simply “roll off” their balance sheet without being replaced.

Thus, as actual tightening of monetary policy in these two fashions commences, it will be VERY minor in the grand scheme of things. Frankly, the central bank will attempt to “jawbone” markets into behavior indicative of inflation coming back down and staying down without having to actually do all that much. My view is that the Fed will end up quite limited in its “hawkish” plans.

Look, friends…I don’t doubt that—belatedly or not—Powell does intend to embark on a substantial (by recent standards anyhow) but methodical tightening to bring some of the price pressures he himself unleashed back to heel. But I do doubt he will be able to carry this on for very long.

Among other things, other nations and economic/market circumstances alike will be reminding him in the days ahead that the Fed is the de facto central bank of the world. And the global economy apart from the US is already going back into reverse; notably—as I’ll be discussing further in the days ahead—in China, which is already back in recession and struggling to stave off a full-fledged deflation, if not epic collapse. Europe likewise is slipping into contraction once more.

I’ll have more comprehensive looks at the markets for 2022 early on as we all get back to work after the Holidays. Below are two more broad themes I’ll leave you with (each will be the subject of separate special issues shortly) are: