What Will Q4 Bring for the Markets?

Sponsored Content - On two discussions last week, Chris Temple, editor and publisher, National Investor Publishing, painted the bleak picture of the mess the Fed (chiefly) and the Biden Administration (a respectable second-place showing) have made of the economy and markets.

It’s one that will be with us for YEARS in numerous forms. And all told, it suggests to me that the current bear market for the stock market, generally, is not at its ultimate end.

In addition to our regular Friday evening Metals, Money and Markets Weekly on kitco.com, I was party to two much deeper discussions late last week. They were: This was my latest discussion with friend and colleague Mike Fox on his The Prospector News podcast and here, I was John Harper’s guest last Friday afternoon (NOTE: You need to look for hour 2 from Friday, Sept. 23 episode and click on it; I start halfway in or so.)

But what we must concern ourselves with for present purposes to some extent is the matter of where the next 5-10% move for the broad market may come from. That as I write this, is by no means certain. My seemingly contradictory recommendations to you of last Thursday and Friday (they really aren’t, as some of you have asked about and as I’ll explain below) do belie a lot of confusion as to how things are going to shake out near-term. Among other things we are seeing even more of a net benefit to US dollar assets due to the deterioration in Europe, China, and elsewhere. Not all of this resulting “risk off” trade is going into the dollar itself: some is going into US dollar-priced equities and even some bonds; arguably slowing down, at least, the bleeding in Treasuries.

Technically, stocks scored a near-term victory at week’s end last week given that the S&P 500 (most important) and Nasdaq ended up above their June lows, even if the Dow Industrials did not. But yesterday (Monday) the S&P closed slightly below its 3666 marker from June. Ominously, Treasury yields that continue to violently ratchet higher aren’t doing the bulls a whole lot of good right now.

I’ve already shared my thoughts extensively in recent days RE: The Fed’s/Powell’s near “suicide mission” as I quipped last week. MAKE SURE you listen to those above-referenced discussions; that’s why I post them to social media as soon as they are available. In many ways the evolving stagflation, market shocks, and the rest are going to be unlike anything we have seen before; and we’ll need to remain nimble.

Going into the latest FOMC meeting, my thoughts were tilting toward a better chance than not that we were at/near a low that could hold into early 2023. I still lean that way: but less so, given the much greater turmoil now in currency and credit markets. The odds that Powell and his merry band of monetary imbeciles are going to pull out one too many sticks are that much greater if they do follow through with another 75 bp and one 50 bp hike in the balance of the year. Perhaps they already have pulled out one (or more) too many and the consequences just aren’t here yet.

Nonetheless, my views that we could get a more extended bear market/counter-trend rally begin with the following reasons/theses:

I hardly believe—with commodity prices having caved a lot more, business slowing and the needs for retailers to discount a LOT of the crap they’ll be selling the hoi polloi over the balance of the year to get rid of bloated inventories—we’re going to get any nastier hawkish surprises like last week’s. 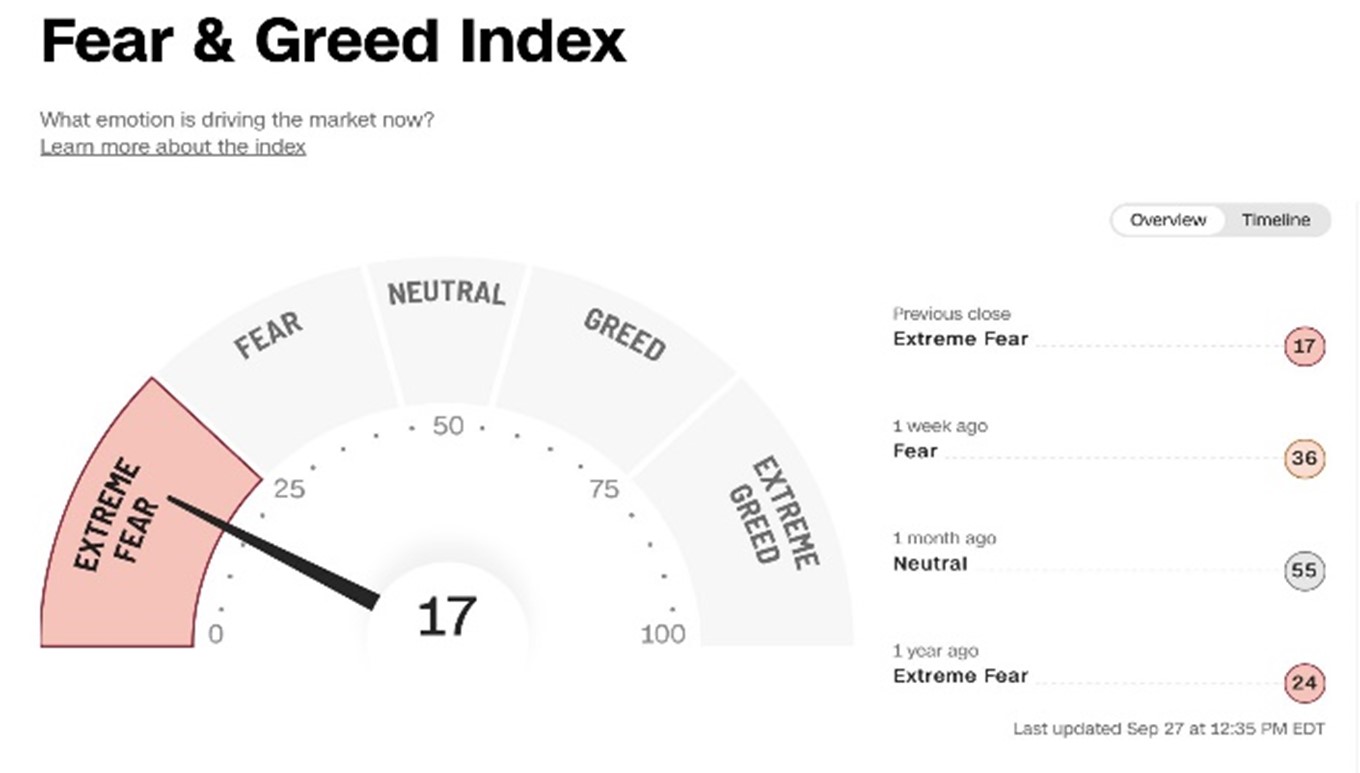 Port in a Storm—the US

But that said, let’s talk about the standout performance of the US dollar; and the relative outperformance likely ahead of us of dollar-denominated assets compared to those in other developed (and the majority of undeveloped) nations.

As I recently said, that the dollar’s move has morphed a fair bit from one based on policy (the Fed’s greater hawkishness than other central banks, etc.) to fear of disasters elsewhere is a BIG danger. You have heard me warn before of the greenback’s surge in 2022 turning into a “dollar doom loop”—and we are precariously close to that type of phenomenon getting out of hand. When it becomes “run for the hills” time in the minds of many traders, they sell (risk assets and troubled countries’ currencies) first and ask questions later. The dough is by and large parked or repatriated into US dollars. This can feed on itself and cause all sorts of trouble; and when (as with Monday this week) you see a near two-point gain in the US Dollar Index, you know something may be about to break. 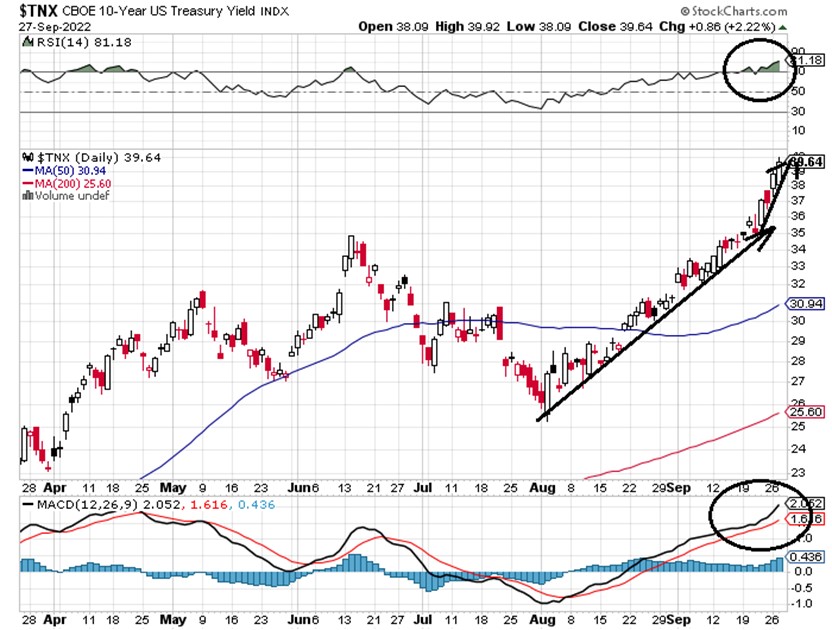 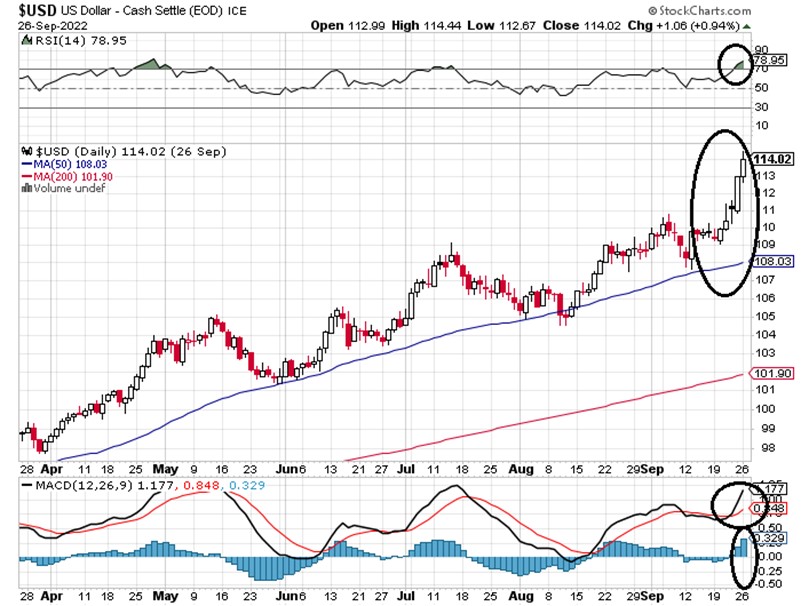 Hopefully, what that also means is most any day now there should be some relief given that these trades have become grossly overextended; at least for the time being. Barring one of Germany’s biggest banks going belly-up…Chinese President Xi really being overthrown…or nukes flying into and/or over Ukraine, I suspect that the “Peak Fed” thesis above—if given a little life, at least, with more slowing economic and then inflation numbers—could take rates and the buck off the boil.

But going forward, it seems almost certain that events will disproportionately favor dollar assets. Even when Treasury yields have peaked and come back down somewhat (more on that just below) it is most likely going to be due to recession/global market fears that will, net, still have more money going into the greenback than not. With US markets and the economy here doing less bad than others, that should likewise limit declines for US markets versus others; see here.

So it may not be “mutually exclusive” after all to be long TQQQ and short EDZ and EPV. Non-dollar economies and markets will remain under greater stress. In the case of Europe, that bloc’s agonizing, slow-motion assisted suicide won’t be ending any time soon; and may still get far worse with the onset of winter. True, the coming reversal (even if a temporary one somewhat) in long-term interest rates’ rise may be more bad news than good; but it WILL disproportionately help the rate-sensitive Nasdaq.

Of course, as I have already intimated a few times in the last several days, ALL this is a moving target. Our mix of directional trades may well change; so don’t go too far!

And please bear in mind that these thoughts cover the near term; perhaps into the early part of 2023. After (likely) a rally on hopes—or even the reality—of a Fed pause or pivot…a GOP victory in the mid-terms…commodity prices staying down a spell…inflation halving to 4% or so by early next year…the reality of a secular bear market and stagnation will set in anew.

It won’t be like 1929 and into the 1930s, necessarily. Nor like 2008. This likely years-long comeuppance will be combining an even worse global new energy crisis than the foretastes we’ve seen…with other intensifying commodity and currency wars and crises…a hunkering down of consumers that probably will rival the 1930s…more political angst, as ever-more caustic (and as always, off point and diversionary) blame is tossed around for the deterioration of our way of life…debt defaults and repudiations…and last but not least, the greatest stress ever on US global hegemony over most everything.

If we live through it all, the years ahead will be as fraught with investment opportunities as they are with peril.

If you want to roll up your sleeves and go through one of the most comprehensive takes on all this that Yours truly has read, check out this article from John Hussman. In this very well laid out piece (a far cry from the usual perma-bear scare tactics and sales pitches, all of which have been wrong for YEARS) John Hussman clinically and piece by piece explains why our world is about to change in a BIG way; and why there is little left that central authorities can do to postpone the inevitable.

If you are not already a member, visit Chris Temple at NationalInvestor.com.