Where are the Selling Climaxes?

Due to health issues Alan Newman is not accepting new subscribers to his CrossCurrents newsletter. However, he was kind enough to share his growing concerns about rising risk in the stock market.

I am is particularly impressed with the attached chart, which highlights every daily session for Nasdaq that traded at least nine shares on the downside for every share on the upside. Over the years, we have known these highly volatile instances as capitulation, equating to a selling "climax."

There are 134 of these sessions strewn across our chart, and they occur at a rate of just over 2.5%, meaning in an average year, you would likely see six or seven sessions with stocks being flung out the window with no regard to price.

However, there are ZERO such instances in the last 516 trading sessions. NONE. The last climax shown occurred on May 17, 2017.

Given how this chart illustrates every important bottom has been accompanied by instances of capitulation, the lack of any climax in two years puts a huge lie on the face of the Composite's low spike of Nasdaq 6133 on December 24, 2018.

There is another interpretation that we have avoided until now, but perhaps we should consider seeing this period as apathy?

What we're driving at is this; as we've seen mostly from mutual funds, the public has been exiting this market for years. That hasn't changed. In fact, we showed earlier this year that even when you include the impact of ETFs, the public wants out.

This actually makes sense since Baby Boomers are chronologically at the point where they should risk less and less. This development would logically reduce the overall number of capitulation sessions.

Then again, we've seen ample institutional panics over the decades. Professionals are far from infallible. Thus, we're back at square one.

Given the length of the bull market, given questions about the validity of corporate earnings, given an economy that is only capable of modest growth at best and therefore, more prone to risk, given still exploding federal debt and the nightmare of servicing said debt with higher interest rates, given valuation levels that remain in the highest decile of all time....if there is apathy shown, we believe that is a bad sign for everyone.

Simply put, risk is way underrated here. Way, way underrated. That huge gap up in price for the market since May 17, 2017 seems quite vulnerable.

The week’s astrological highlight is on Tuesday, September 29—the day of the first US pr...

Trading an Earnings Phenomenon
8 hours ago

Today, let’s focus on an earnings trade I made with Costco. This trade is a little bit differe... 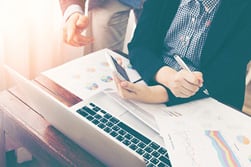