The S&P 500 (SPX) recovered on Friday, but after last minute selling, much of its gains for the day were gone. It was up 19 basis points in what was a week the bulls will want to forget. The S&P 500 was down 0.89% last week. The Dow (DJI), which has underperformed in the past few weeks because of trade tensions, was up 119 points. The Nasdaq (IXIC) and the Russell 2000 (RUT) fell 0.26% and 0.2% respectively. Even though the Dow and the S&P 500 recovered, the financials were down again.

Financials in a tailspin

The Financial Select Sector SPDR Fund ETF (XLF) has been down 10 straight days.

Even though this is a long streak, the XLF is down only 3.6% since it started. However, it’s telling that on an up day, the XLF fell. In this 10-day streak, the yield curve has been flattening sharply. The curve was steady on Friday as the 10-year yield remained at 2.89% and the 2-year yield stayed at 2.54%. The difference between them is 35 basis points.

If the financials need the yield curve to steepen for them to rally, the rest of the year is going to be terrible for the sector. It’s possible that the record high reached in January won’t be matched until the next business cycle.

Clearly, it will be easier for the S&P 500 to reach a record high than the XLF. The financial sector will be the first to report in mid-July.

The energy sector was the top performer on Friday as it rallied 2.2%. This is because oil was up 4.6% to $68.58. This was the biggest daily increase since November 2016. It will be interesting to see if oil regains its upward momentum since the global economy is weakening.

For now, the price of black gold was up on the news from the OPEC meeting. The organization didn’t give concrete output figures, but the statement said it would go back to 100% compliance with the previously agreed output cuts. This means Saudi Arabia will increase production by 1 million barrels per day and Iraq will increase production by 770,000 barrels per day. These increases are attempting to make up for the countries which won’t be able to reach their full quotas.

This rally in oil is bad news for the U.S. consumer who has seen its tax cuts go to rising fuel costs.

However, it’s great for the energy sector and industrial production. Having the energy sector lead the market higher would be unsustainable because eventually high oil prices will crush the consumer. It could create a blow off top in the market like 2007 except without a financial crisis following the next year.

Dollar at a crossroad

The dollar was down again on Friday which may have helped the big caps at the expense of the small caps. As you can see in the chart of the index below, the dollar fell 34 cents to $94.52.

The dollar can go in either direction shown by the purple arrows. With the recent weakness in manufacturing, the dollar might end this bullish swing. However, the Fed still is hawkish and the global economy, particularly China and Europe, is weakening. 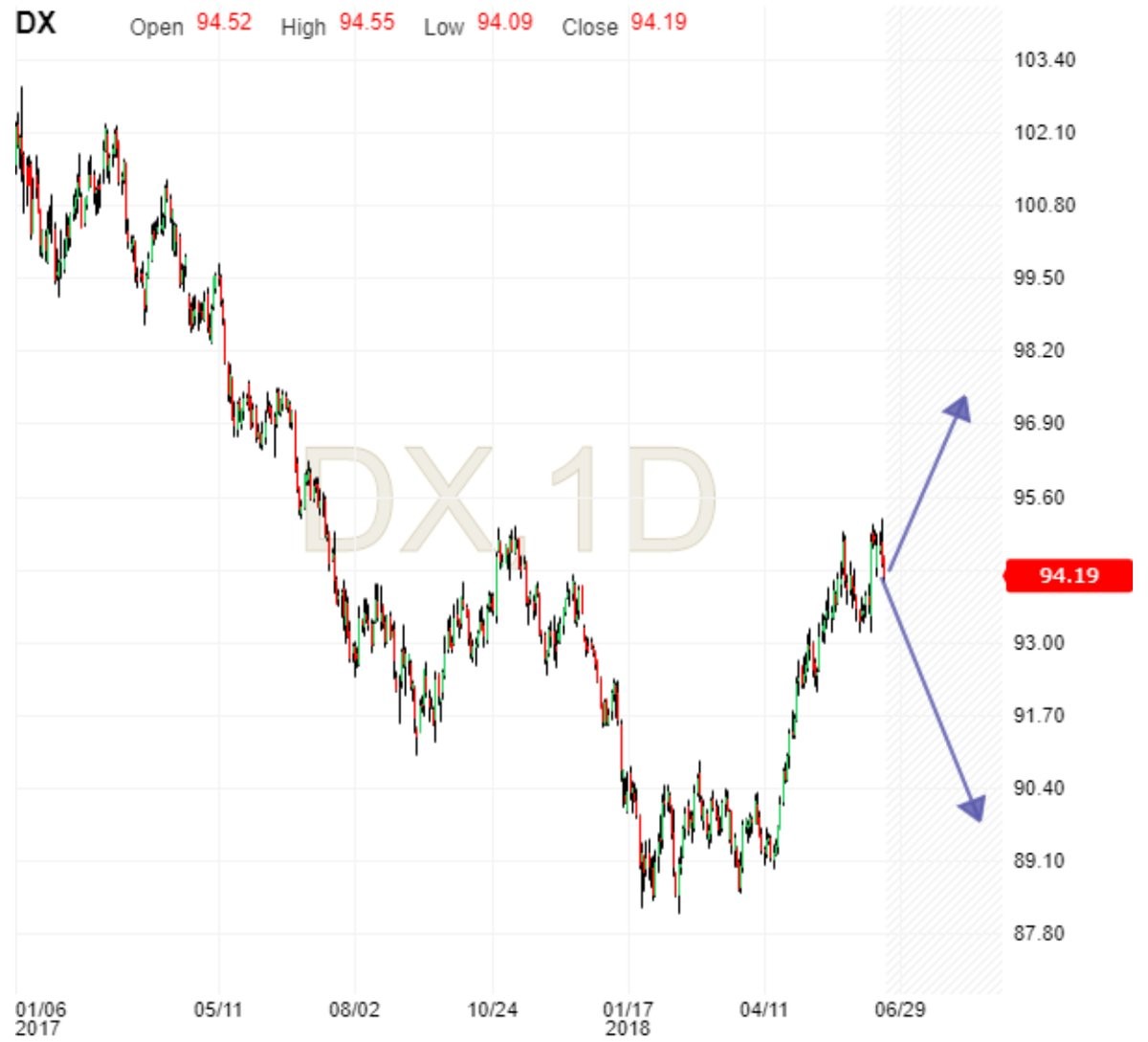 The discussions on tariffs gain so much attention because there is news about them almost every day. Trump is basically negotiating with the world since he has threatened Canada, Mexico, Europe and China. Jim Cramer made a great point when he said he thinks Trump will win the skirmish with China, but he needs to do it in the next 3-6 months because the global economy is already decelerating.

America is in a strong position because the Chinese economy is faltering, and its stock market is crashing.

Specifically, fixed asset investment in April fell to 6.1% which was below estimates for 7% and is the slowest pace of expansion since the National Bureau of Statistics started calculating it in 1996. Industrial production growth was 6.8% in May which is a 22-year low. Retail sales fell from almost 10% growth to 8.5% year over year in May. This is the slowest growth in 15 years. After the strong start in Q1, China’s economy is flailing.

As I mentioned, there is news surrounding the trade skirmishes, which are being fought on multiple fronts almost every day.

The latest news on Friday was Trump’s tweet that if the EU doesn’t break down its tariffs on America and its barriers to entry for American companies, America will place a 20% tariff on all their cars. The president wants the cars to be built in America.

I think this tweet caused the stock market to have a sharp down tick at the end of the trading session. The tweet came out at 2:34 pm; there were a lot of sell orders at the close which caused the S&P 500 to fall about 4 points in the final 3 minutes of trading.

The latest update from the CNBC tracking average which was on June 20 shows the models expect 3.9% GDP growth. The median estimate is for 3.7% growth.

The uber-bearish New York Fed Nowcast lowered its GDP expectation for the third straight week. It fell from 2.98% to 2.87% because the building permits report took off 12 basis points. The Q3 estimate fell very sharply as it went from 2.84% to 2.57%. This estimate makes it look like growth is peaking in Q2.

The St. Louis Fed Nowcast is like most other models as it expects 3.44% growth in Q2.