In this week’s Macro Theme, we review “Reflation’s Rollover” and bring the slowing inflation conversation back home. We activated this theme on August 27, and in the last month more confirming data has rolled in and strengthened our conviction, writes Landon Whaley.

But it’s not just economic data backing our play on this one—real-time markets are also signaling Reflation’s Rollover, which continues to present us with opportunities to bet against crude oil-related equities here in the U.S.

The key to our success in nailing the big macro calls this year lies in our ability to discern the subtle shifts in Fundamental Gravities before everyone else. This requires us to stay data-dependent to what the economic data is telling us, while keeping our eyes and ears open to what markets are telling us in real time. Most investors don’t realize it, but asset classes often front run shifts in the underlying FG of the economy in which they trade. Said simply, markets often give us a head nod as to where growth and inflation are likely headed.

With that in mind, markets have been very clear on where they believe U.S. inflation is headed over the next quarter.

One of the “purest” ways to gauge the market’s expectations for future inflation is to analyze the spread between Treasury yields and TIPS yields.

The two most inflation-sensitive sectors of the U.S. equity market are metals & mining and energy stocks. The metals & mining sector peaked on June 7, has now declined -7.6% and experienced a maximum drawdown during that time of -14.1%. In the same vein, energy stocks peaked on May 22, and have declined -3.2% while experiencing a -7.1% drawdown. These performance statistics are exactly what we expect to see during a period when U.S. inflation slows. 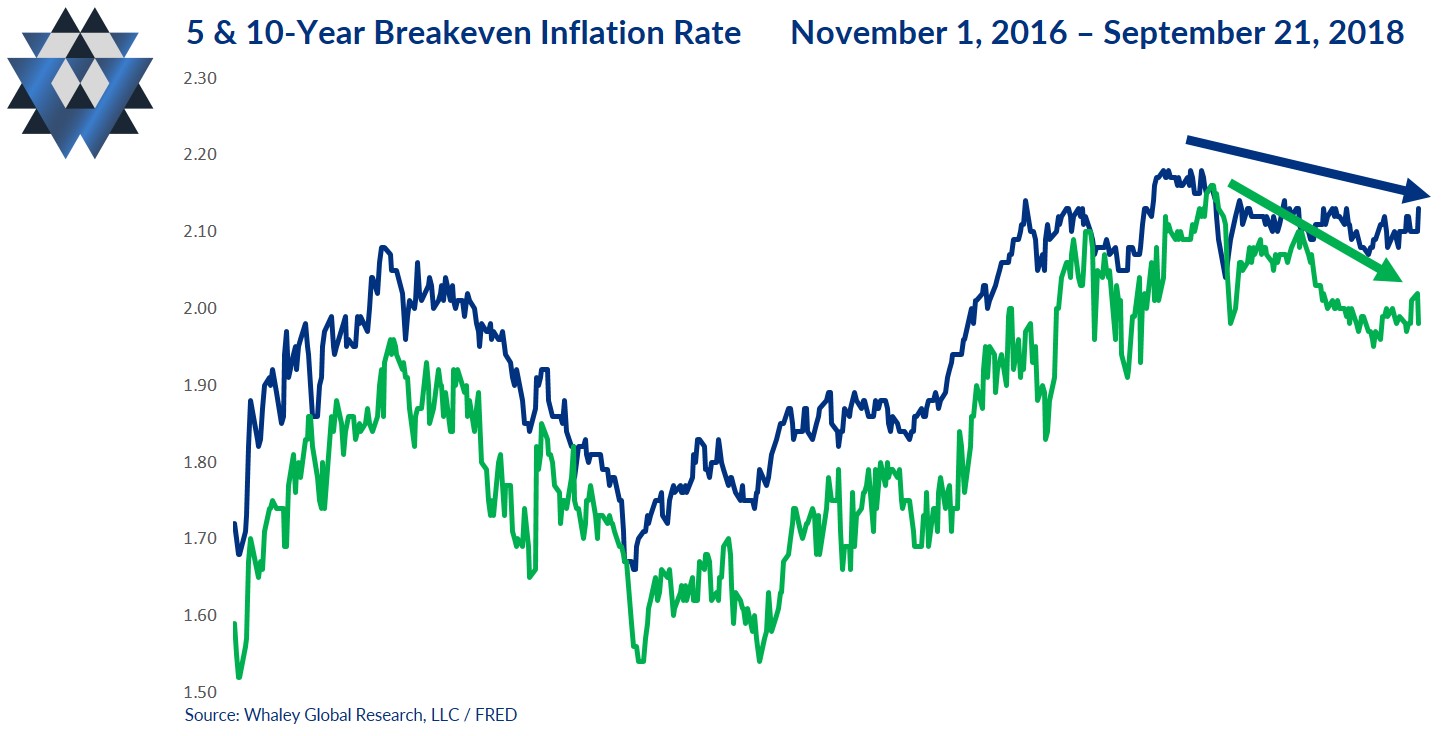 The August iteration of the three primary measures of U.S. inflation are backing what real-time markets have been telling us for months.

Two months don’t make a trend, but an outright slowing of inflation across multiple measures is a new development not seen in more than a year.

Both lagging economic data and real-time markets are confirming that U.S. inflation is slowing for the first time in 12 months. The investing playbook implications of this Fundamental Gravity shift from FG3 (growth slowing alone), to FG4 (growth and inflation head south together) are nothing short of profound, and it doesn’t get any more bearish for crude oil-related equities.

During this type of FG environment, OIH typically averages a -6.6% quarterly return with an average quarterly drawdown of -20.4%. In addition, it posts positive three-month returns 50% of the time, which is essentially a coin flip.

This Friday, September 28, we will release part 2 of this commentary, which is where we will dig in to the other two critical forces, or gravities, that are currently impacting crude oil-related equities: Quantitative and Behavioral. We will also provide a detailed game plan for trading VanEck Vectors Oil Services ETF (OIH).

If you can’t wait the 48 hours to get the complete picture for this macro theme and the accompanying trade details, please email us at ClientServices@WhaleyGlobalResearch.com with the subject line “Reflation’s Rollover – Part 2.”