Tracking the moves of the big players can put us on the right side of market’s turns, writes Andy Waldock, Founder, Commodity & Derivative Advisors.

When encouraging an underdog in any competition we often like to say: “The opponent has to put their pants on one leg at a time, the same way as the challenger.”

While that may be true in a one-on-one matchup, it simply does not apply to the world of trading. In other words, Goliath really does have the advantage over David.  As an example look at We’ll use the sideways trading action of the Australian dollar in 2016 to explain how the large corporations manage currency risk as well as how you can put the endpoint of their analysis on your side.

Let’s begin with the advisers. We all look up the ladder for advice. There’s always someone who knows more than ourselves and the smartest among us know at least that to be true. In that vein, thank you for taking the time read up on our methodology. Much of it simply comes down to information.

I have information you don’t and Fortune 500 companies have access to information that I don’t. Fortune 500 companies hire the brightest minds and the most well-connected individuals to advise them on their operating procedures. While this seems logical in agricultural companies, let’s expand the thought process. Large multi-national companies also have currency risk to deal with. Therefore just as a company like Barrick Gold Corporation (ABX) has board members from Burlington Resources and the China Investment Corp, they also have members like Dambisa Moyo, formerly of Goldman Sachs (GS) and World Bank. In fact, currency risk is important enough to be broken out separately on many companies’ quarterly reports (see table). 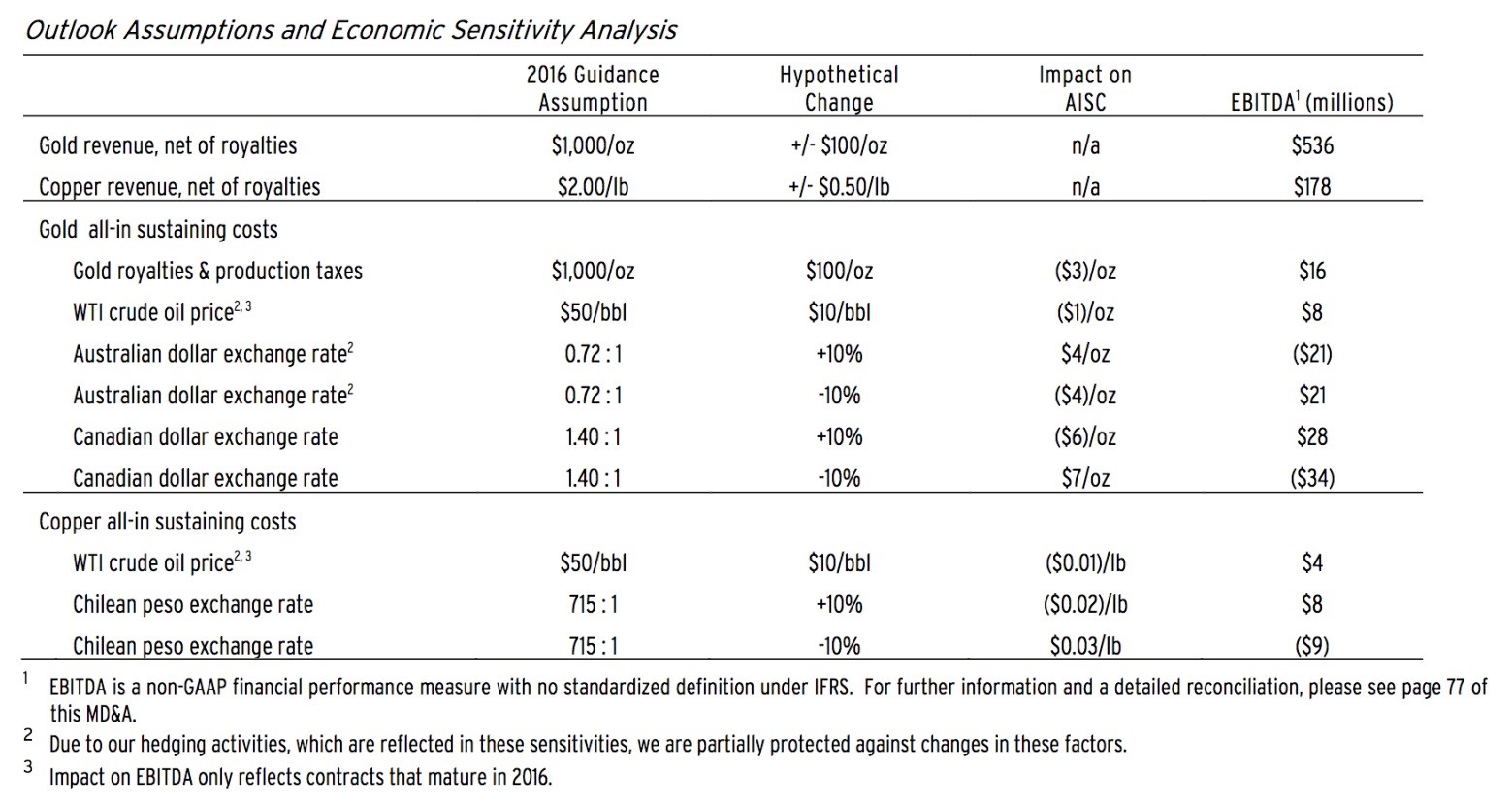 As you can see, Barrick’s economic analysis includes Australian and Canadian dollar analysis as well as Chilean peso and crude oil components for 2016.

Fortunately, we don’t have the responsibilities of converting currency risk on such a large scale. Even better, it is exactly their scale that makes them easy to track. We use the weekly Commodity Futures Trading Commission’s Commitments of Traders (COT) report to track the actions of these type of commercial traders as they manipulate their currency risk around their assumption of fair value as determined by the leading minds in the business and economic worlds. Looking at the bottom pane of the Australian Dollar futures chart (below), you will see the commercial traders’ actions plotted as the blue line. We track the momentum of the commercial traders’ buying and selling to determine market bias. We only take trades in the same direction as the commercial traders. If they’re buying, we want to find a place to get long. If they’re selling, we want to find a place to get short. 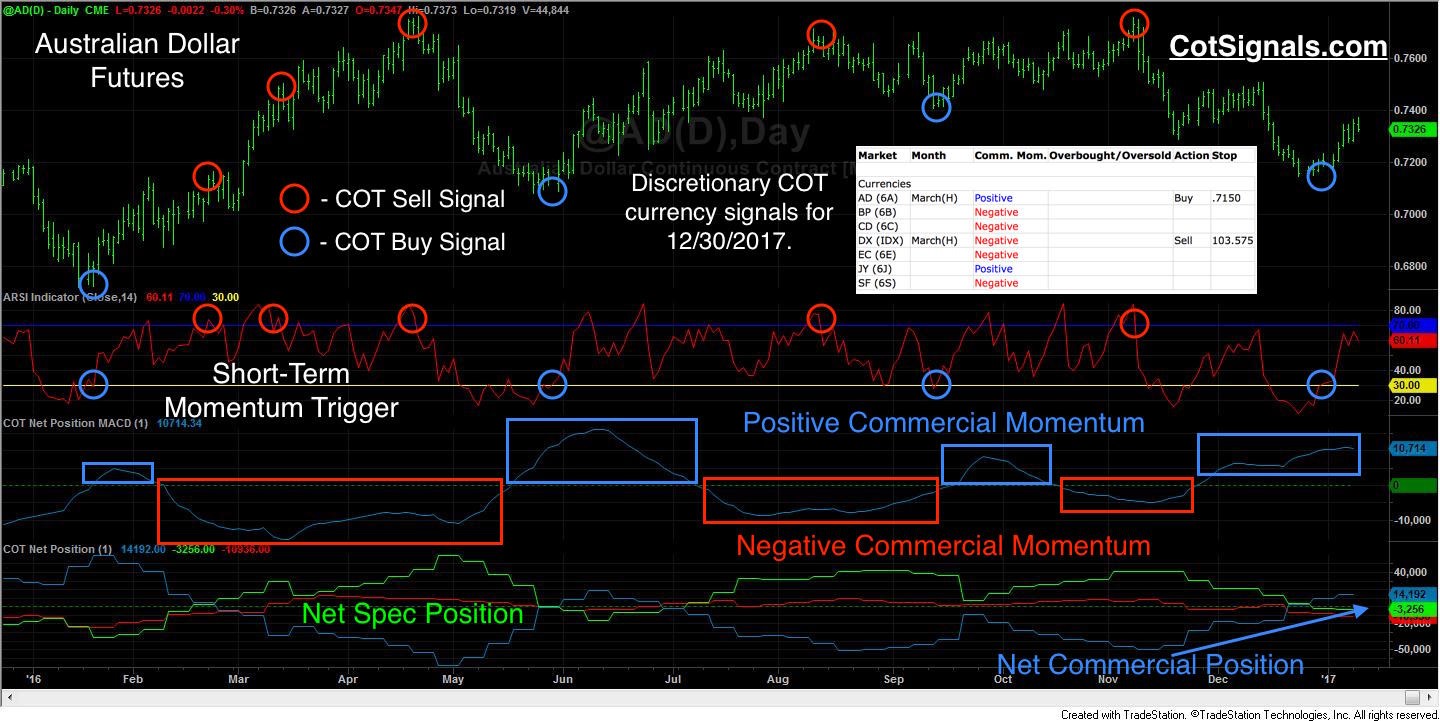 Fortune 500 companies’ actions appear as the commercial trader category in the Commitments of Traders report. Notice the consistency of the $.72 per Dollar forecast for 2016.

We use a proprietary short-term momentum indicator to define our entry and protective stop loss placement conditions. When the speculators and commercial traders are most at odds with each other, it shows up as a short-term momentum indicator that conflicts with the broader and more powerful commercial traders’ momentum. Commercial traders had been net buyers in the Australian dollar for seven out of the previous eight weeks in this 2016-17 chart. This has pushed the commercial trader momentum firmly into positive territory and placed on the lookout for long entry opportunities. The U.S. Dollar Index’s late 2016 surge created a sell-off in the Australian dollar that created an oversold reading on our short-term momentum indicator in the face of increasingly bullish commercial momentum. Ultimately, the rebound triggered a COT Buy signal on Dec. 30, 2016. Secondly, the reversal provided us with a protective stop placement point created by the swing low and published at $.7150.

Trading began in port cities and populations sprang up around them as merchants, bankers and producers gathered to conduct the business at hand, each paying the price to be near the action. Eventually, commodity exchanges came into existence and the price to be paid was a seat on the exchange. Finally, the electronic age has brought the paid hosting of co-located electronic servers. Ordinary traders like us will never compete on a nanosecond delay in the electronic marketplace. However, tracking the moves of the big players can put us on the right side of the market’s turns. 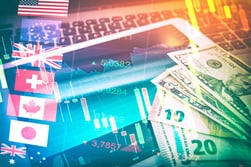 The Protest Playbook
7 hours ago

With social unrest and rapid escalation of social discord in the United States, watch the US Dollar,...

Euro Is in a Breakout Mode
8 hours ago 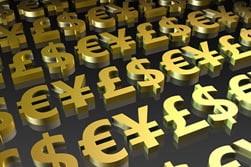 The U.S. Dollar Index breached a key support area and a the 0-year T-note offers up an opportunity, ...