Strange activity in bonds after confusing reports from the Fed has markets spooked, notes Joe Duarte.

Stated plainly, the buyers seemed to walk away from the markets with all the bids drying up, leaving the high frequency trading algorithms with no one’s money to take but each other’s.

So, what’s next? If the central banks around the world don’t stop confusing the markets, I suspect that the late 2018 rapid decline in stocks may look tame compared to what could happen in the next couple of weeks.

What were they thinking?

As I watched the final two hours of trading on July 19, I got a sinking feeling which reminded me of an old heavy metal song by the seminal head banging band Judas Priest. The song called “The Ripper,” features the haunting chorus “Oh hear my warning. Never turn your back on The Ripper”- and it kept popping into my head as the Nasdaq rolled over and U.S. Ten Year note yields (TNX) stayed stubbornly above 2% despite the Fed all but admitting that it’s starting to freak out about a potential recession.

Strangely enough, the head scratcher of the week was when New York Fed Chief Williams rallied the bulls on Thursday with remarks interpreted as confirmation that the Fed was about to step on the money printing pedal, only to have the New York Fed press office come out a few hours later and say that Mr. Williams was referring to an academic exercise.

But even as the Fed tried to soft shoe the event, they couldn’t have made a bigger mistake because Williams said it, the markets rallied, and then when the Fed took it back, the markets fell apart. Moreover, the market clearly saw the whole sequence as an act of bad faith from the Fed with the net effect being the pulling of the rug out from the stock market.

Thus, to bond traders it looks as if the Fed is clueless, rudderless or just plain out to lunch. And to stock traders, who were looking to the bond market, things suddenly took a very bad turn. The bottom line is that what looked to be a potential launching pad to new highs on Thursday turned out to be a messy Friday which could turn into a very bad Monday.

It may not mean anything in a couple of weeks, but the New York Stock Exchange Advance Decline line (NYAD), the most accurate indicator of the stock market’s trend since the 2016 presidential election, rolled over last week after making several very encouraging new highs in the month of July. And making matters worse, NYAD looked very tired on Friday, which means that the short term up trend is now in question. 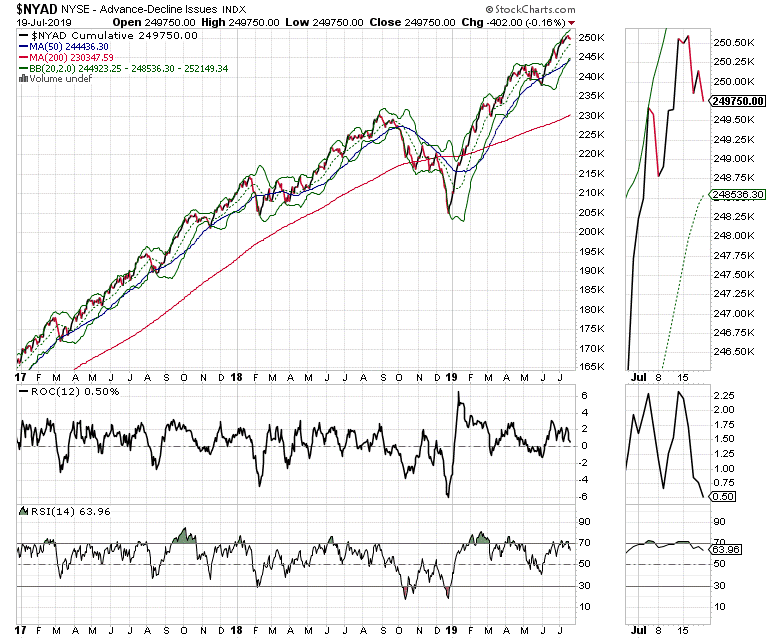 Of course, this could be a short-term blip and we could be off to the races and new highs in a few days, especially if the central banks make nice with the markets. Nevertheless, it feels bad right now, especially when you consider that what seemed to be a burgeoning extension of the recent rally, fizzled out by early Friday after the Fed’s weird activity on Thursday.

Accordingly, the key to the short and perhaps the intermediate-term trend will likely be decided by the 20-day moving average on NYAD and what happens when the relative strength index (RSI) for the same gets to 50. Breaks below those key indicator levels could take us lower, and perhaps in a hurry. 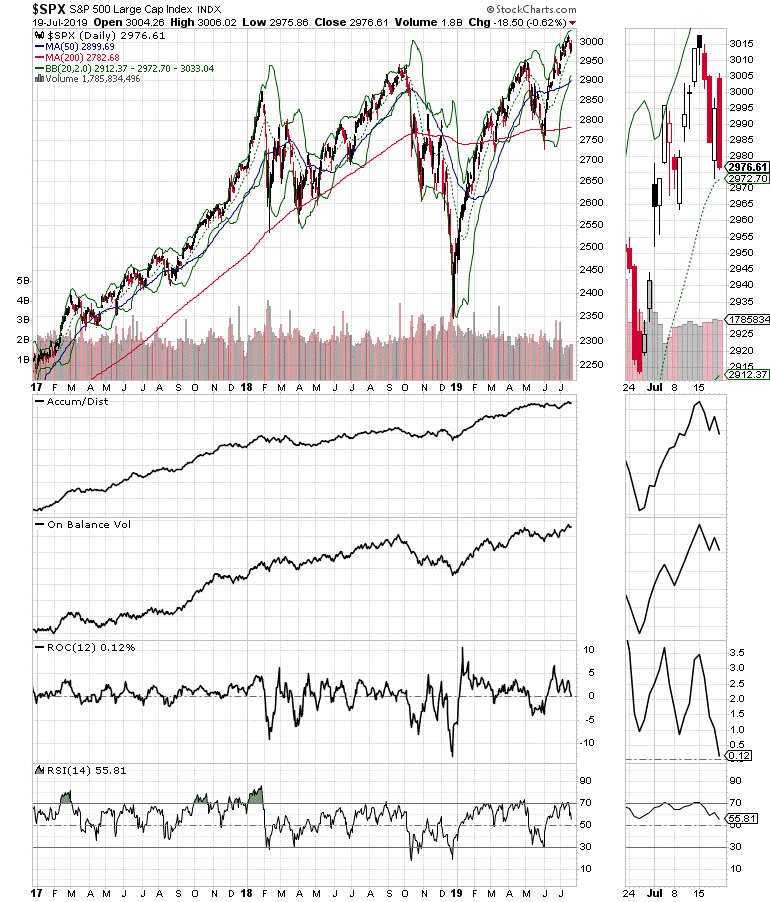 The S&P 500 (SPX) hit a big air pocket above 3000 and looks exhausted suggesting that we are headed lower in the short term. Both on Balance Volume (OBV) and Accumulation Distribution (ADI) took a powder as well, again supporting the notion that the buyers went away on Friday. If the 20-day moving average fails to hold prices we are likely headed back to the area just above, or just below 2900 on SPX, and likely in a hurry. 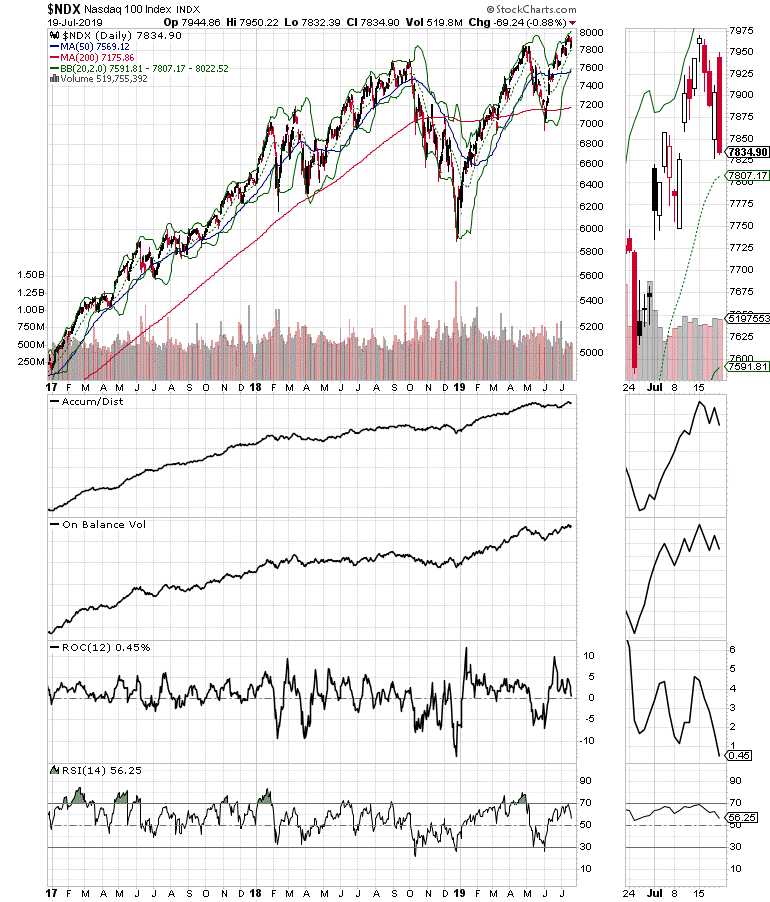 The Nasdaq 100 (NDX) displayed its own version of throwing in the towel on Friday, failing to hold above 7950 and is looking quite ready to test its 50-day moving average if the 20-day line doesn’t hold up.

The Bond Market is a Scary Place

As I’ve noted over the last few weeks, the center piece of the financial markets at the moment is the bond market. That’s because the world economy is fueled by debt. And even though the Fed usually guides the general trend of interest rates, it is the bond market that sets the big rates, such as mortgage rates and car loans. 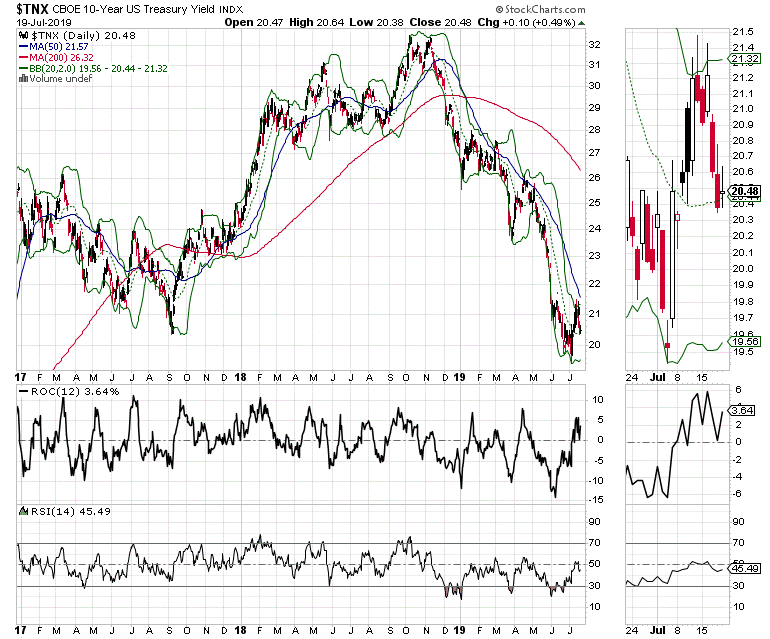 As the bond market goes, so goes the Market-Economy-Life (MEL) complex where everyday people make financial decisions based on the effect of market interest rates on their lives and pocketbooks. Under normal conditions lower interest rates usually give people confidence in their finances through the increase in their stock holdings via their 401(k) plans and their ease of borrowing through their home equity lines of credit and other credit devices. This perception of wealth usually encourages risk taking, which is especially noticeable in the housing market.

Up to last week, I had been fairly positive, but not outright bullish on housing, given the general trend of lower yields on the U.S. Ten Year Note (TNX), the benchmark for most long term mortgages. Yet, this past week’s generally poor housing data, albeit worse for multi-family homes than single family dwellings, and the bond market’s unwillingness to move TNX yields below 2% despite that data and the likely Fed rate cuts. Indeed, if things don’t change, we may be at a radical turning point for MEL, which could mean a simultaneous decline in the markets, the economy, and in people’s financial lives.

What I’m saying is that if the low mortgage rates of the moment aren’t enough to get people off the couch and into new houses, and the bond market doesn’t want to rally any further even when there is weakness in the housing sector, we could be close to a full-fledged MEL stall as people’s fear of whatever is going on in the world is leading to a major bout of a disease called money is best kept in my pocket.

Is this the Big One?

This is one of those times that I really want to be completely wrong. And, if history holds up, even if we have a 5-10% Beatdown in the stock market, this could be yet another buyable dip at some point. But for now, let’s see how things go before we throw more money into stocks.

I don’t want to be dramatic, but in this market, because of the algos things happen fast. Moreover, I certainly hope nothing catastrophic happens in California or the markets. But just as the recent quakes on the West Coast could be a warning that the big one could hit the Golden State at any time, so could Friday’s sudden fainting spell in the stock market, along with the lack of enthusiasm by bond traders mean that a sudden decline is in store for the bull markets in both.

As a result, I recommended short term hedges. I will be minding my sell stops and I will be on high alert over the next few days. What could change things? How about if the Fed clears their mess up and communicates clearly to the world while backing it up with real action.

Nevertheless; “Never turn your back on the Ripper,” the Fed or the bond market.