Are You Still Trying To "Fade" The Bond Rally?

For weeks if not months, prevailing wisdom was bearish bonds. Many of these analysts had been bearish back in November of 2018. One suggested that this rally is really a fake. The problem is that these analysts have been trying to fade this rally for the last 10% to 15% up. That’s a lot of losses.

Many people do not understand the context of the markets. Remember how certain analysts and investors were that rates were only headed higher back in November of 2018 (see chart)? 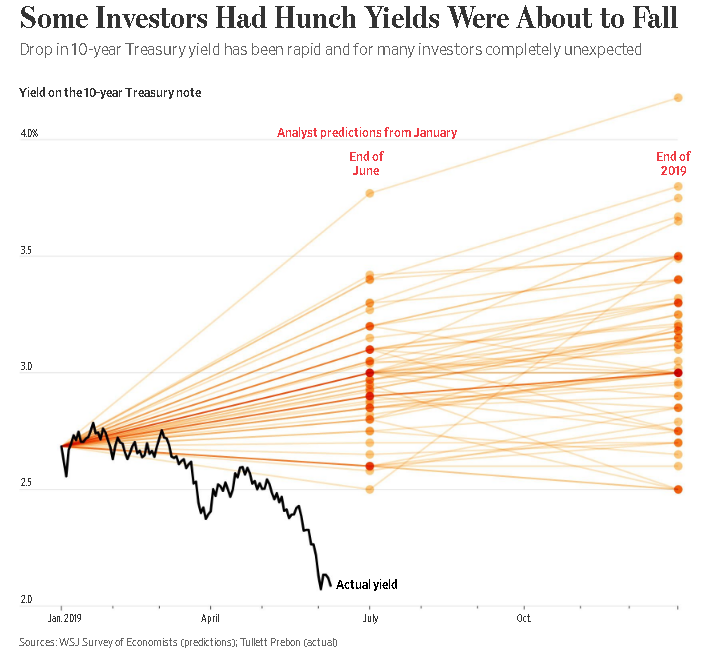 And these same analysts have been fighting it all the way up.

Traders who followed our recommendation to go long the iShares 20+ Year Treasury Bond ETF (TLT) when it was trading around 112-113 have now made 20% on that trade since November 2018.

Going long bonds during the last 10 months has been one of the most least popular trade trades, yet one of the most profitable. Unfortunately, the mantra “you cannot fight the Fed” kept many out of this trade. Turns out it was the Fed that capitulated.

While the market may choose to go higher in the coming months, I recommend taking profits or exiting on a break down below 134.

The question I have been asked many times of late is whether one should consider shorting the TLT now that the rally I have been expecting has just about completed?

While the market will likely top out soon, much will depend on whether the TLT can find support in the 129-131 region on the next pullback. If it pulls back correctively to that support, then we can still see one more rally in the coming months, which can even make a higher all-time high in TLT.

However, should the market be unable to hold support in the 129-131 region, that is an initial signal that an all-time high was likely struck back in 2016, and that rates are heading higher from here on.

In the meantime, take some profits and tighten up stops.

Who knows, those who have been bearish bonds and have missed this 20% rally, may turn bullish and extend the rally. For now, I think we are getting a bit too frothy for my risk appetite.

Avi Gilburt is a widely followed Elliott Wave analyst and founder of ElliottWaveTrader.net, a live trading room featuring his analysis on the S&P 500, precious metals, oil & USD, plus a team of analysts covering a range of other markets. He recently founded FATRADER.com, a live forum featuring some of the top fundamental analysts online today to showcase research and elevate discussion for traders & investors interested in fundamental rather than technical analysis.