This week’s COT report shows opportunities in OJ and silver, take the OJ as silver has a tough risk/reward ratio, reports Andy Waldock.

Our trading strategy is a pattern-based mean reversion methodology. While this has several advantages, the risk doesn’t justify the reward in the current setup in silver futures, which recently signaled an oversold reversal (see COT Table below). 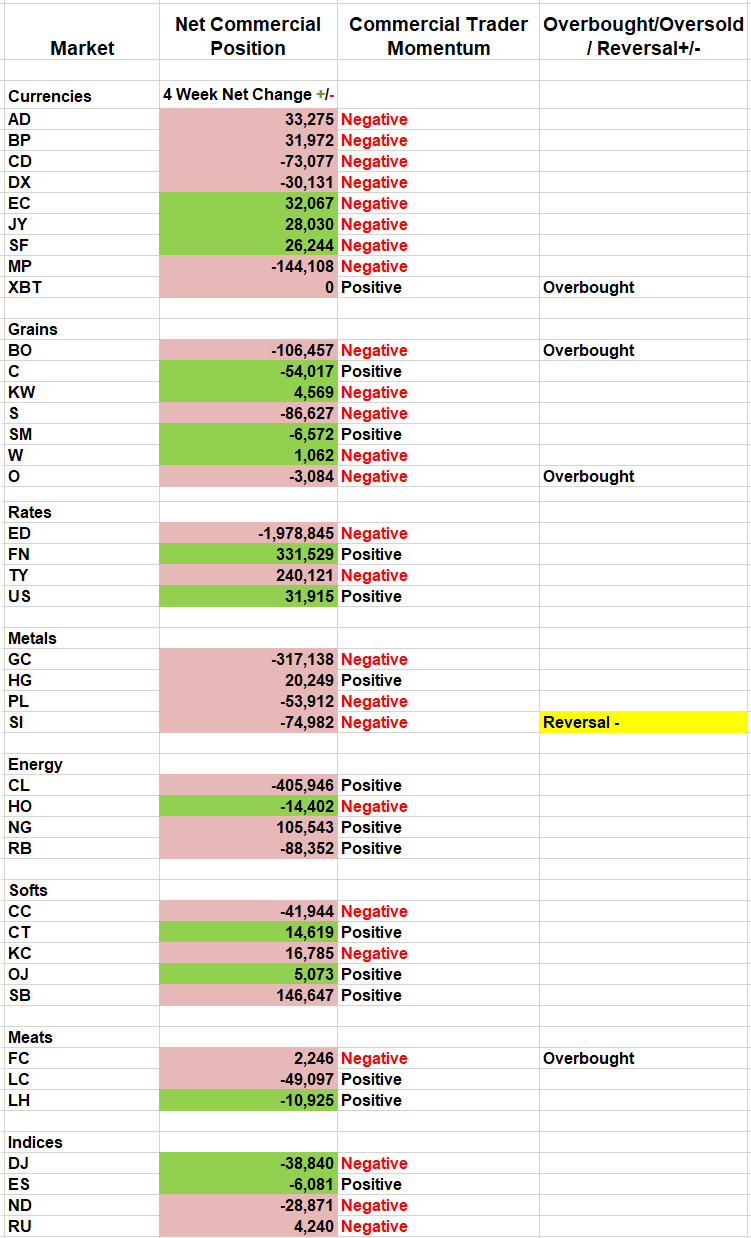 Commercial traders had become increasingly bearish late this summer. Their selling peaked at the market’s climax. We issued a short sale signal for Sept. 16 and a protective stop at the high of $19.75 per ounce. The risk from the Sept. 16 silver signal open was $2 per ounce or $10k per futures contract. While this risk was substantial for an individual trade, we anticipated a downside target of around $16.50. This trading method is based on having a high winning percentage, which helps offset a win/loss ratio of about 1.5 for the September silver trade.

Currently, December silver is trading at $16.82 per ounce. The long-term weekly averages for silver bring support to the market between $16.20 and $16.80. Furthermore, there is significant support between $15.45 to $15.90, which dates back to July of 2018. Therefore, the current short sale signal, while valid, doesn’t justify risking nearly $3 per ounce or $15k per futures contract.

Conversely, the January orange juice setup is a great candidate for our method. Commercial traders have remained on the buy-side below $110, dating back to May’s decline. Their support was the key to the market’s early reversal from the January contract’s low of 96.10 cents per lb. two weeks ago. Last week’s consolidation came with a higher close, pushed by additional commercial purchases. These purchases were likely made to ensure future supplies at low prices should this week’s pending cold front put a damper on supplies.

Technically, the orange juice trade is a better fit to purchase on a breakout above the high two weeks ago, at $1.02. If the buy stop entry order is filled, we can place our protective sell stop below last week’s low at 97.75¢. The consolidative nature of this pattern reduces our risk to $637.50 per contract plus slippage and commission. The orange juice market can be thinly traded at times, and slippage can be considerable. My first target is between $1.10 and $1.12. As you can see, this creates a much better risk to reward profile than the silver trade.

Finally, the commercial traders continue to sell against the overhead technical resistance in the Canadian dollar.

From last week, “The Canadian dollar’s recent rally has brought both the downward sloping trend line dating back to the 2013 high as well as the 90- and 120-week moving averages into play between .7660 and .7760.

Commercial traders are now short more than 73k contracts. This is their largest net short position since early 2018, when the Loonie was trading at 80¢ to the greenback. A close below 7520 this week sets off the next leg to deeper trend support at 7435.