Stocks Looking at Choppy Markets Ahead

Market corrections continue to fail but stocks could face volatility. Here are some markets that may serve as signals of further weakness, reports Jeff Greenblatt.

Markets came out of the Thanksgiving Holiday on the back end of the 233-day window with weakness that started on Friday. Hard to say how much weight you can put on groggy traders still impacted by Thursday’s big meal. But it did spill into this week where President Trump allowed bears to at least get themselves that Turkey sandwich I discussed last week. He said it may be a good thing if there is no trade deal until after the 2020 election. Then Wednesday Bloomberg reported people familiar with the negotiations said the countries were moving closer to an agreement on what tariffs would be rolled back.

Mind you, nothing has been agreed to yet, but the markets were up anyway. President Trump doesn’t need a deal; he just needs to keep the market up. Given the Federal Reserve injects all that money into the system every night, it's not that hard to accomplish. It’s amazing how the market keeps falling for it. But it's getting old as none of us can remember a single instance where a President worked at manipulating the stock market the way this one does. Every prior President in our lifetime has stayed away from such rhetoric. Part of the reason this market stays up is funds keep pouring in from Europe, which has negative rates. That being said, President Trump wants Fed Chair Jay Powell to give him some of those negative rates.

What did all of this accomplish? Markets came right back down on the other side of the 233-trading day window off the bottom from last December. Yet they found a low late Tuesday on a very mediocre reading. Stocks were all over the map by Tuesday’s close. Some charts had very good calculations on secondary lows. Then we have a proxy for the market, the Philadelphia Stock Exchange Semiconductor Index (SOX). The SOX has a support magnet line that also works well with the 50-day moving and on Tuesday it came right down to the line and held (see chart below). If it breaks, there is a good chance it ends up at the 200-day moving average, which would be a big drop. 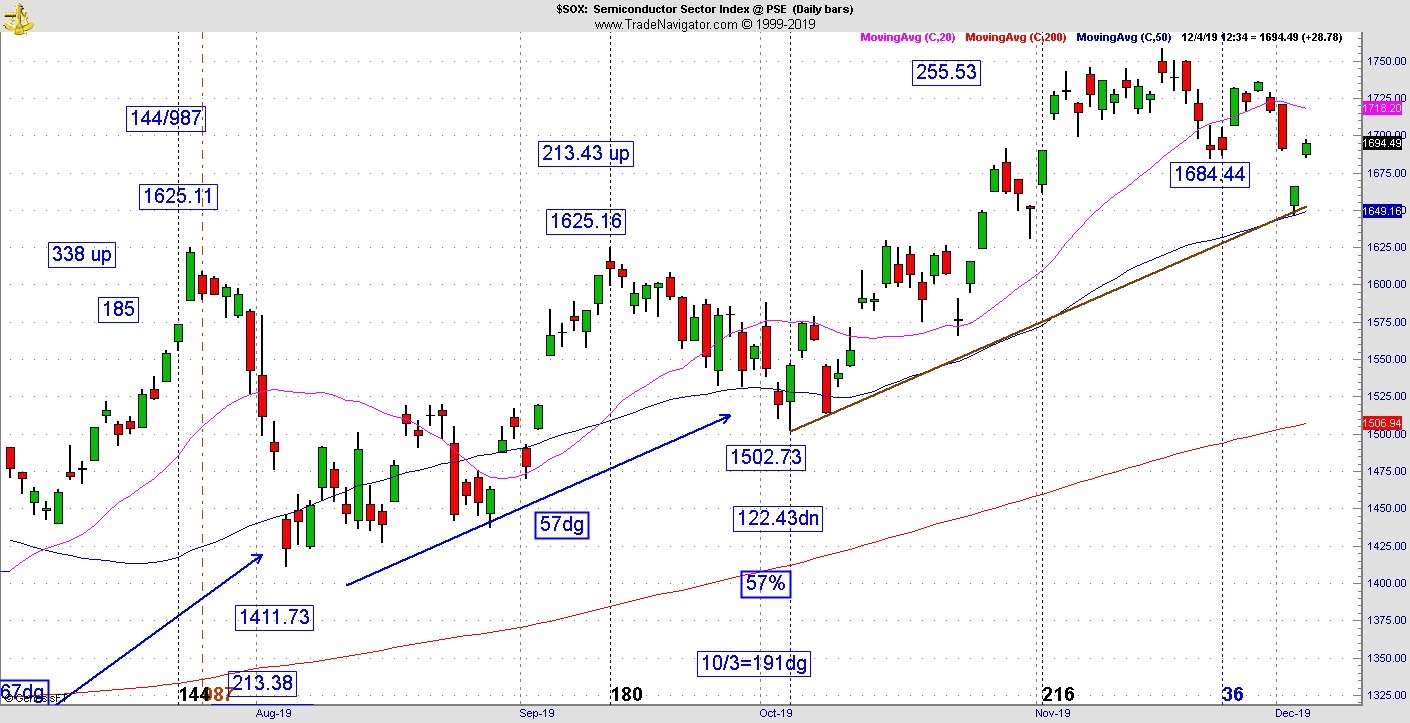 Then we have the Wednesday morning Dow Jones Index futures (YM). Do you want to be able to establish your bias for the day? You’ll never see a better chart than this one. The action took off at 61 bars on a 25-minute chart at the 60% retracement (see chart below). More important is if the calculation is a good mathematical representation of human emotion so we can see this low has a chance to hold. We can say that already by the organization of the setup which is very good. Some people will just look at the price action, see that its up and go with it. Price action that manifests out of good Kairos readings have a much better chance. 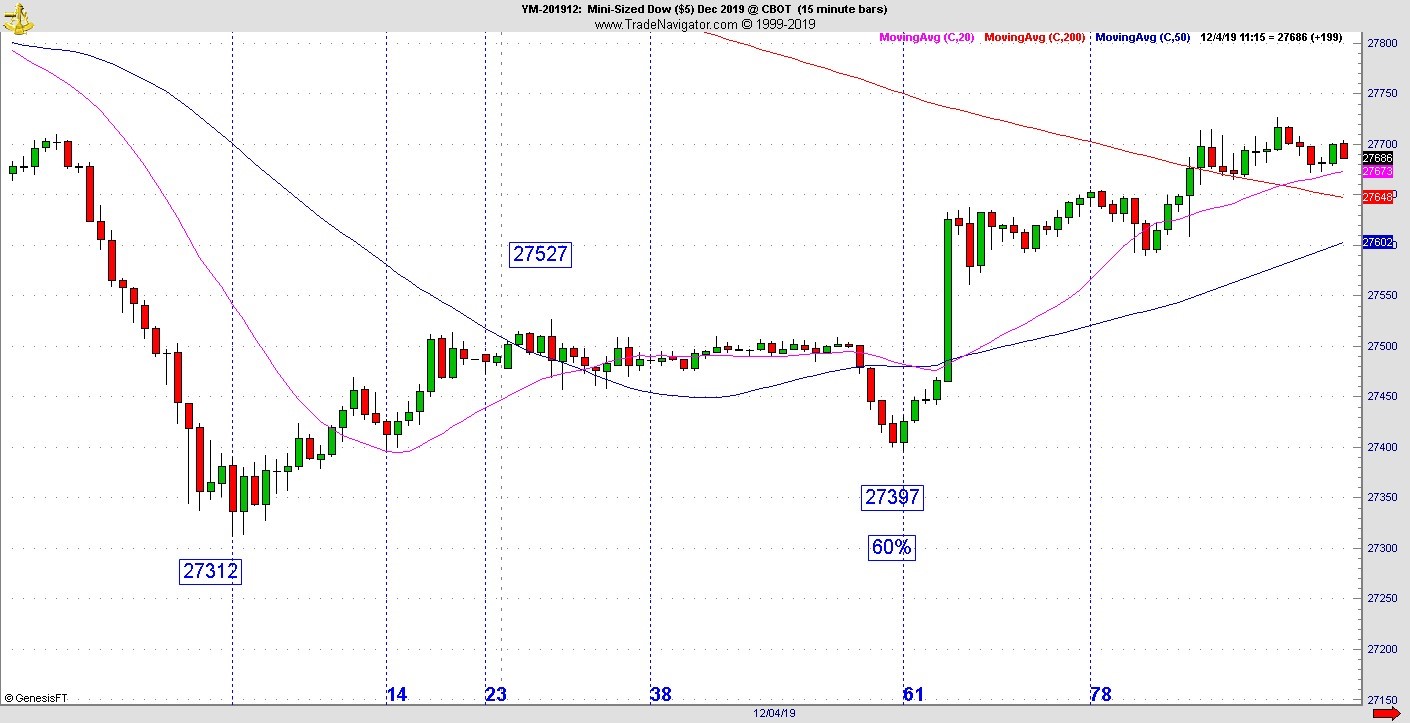 The challenge here is the high is also on an important cycle change point. The verdict could be a sideways market for a while. A pullback is long overdue and its only been a couple of days. That being said this is also the favorable holiday time of year. The wild card could be any serious impeachment action that could develop over the holiday season. Right now, polling data shows the public is weary and not in favor of it.

Also, in favor of the market staying off this low is the U.S. Dollar Index, which stalled at key polarity resistance, which has stalled to the downside and left a tail on Wednesday. It could very easily morph into a trading range for a few days.

Finally, last week we talked about the Gann calendar. Back in November we saw a higher low develop on a perfect square out of calendar vibration lining up with the retracement. There was a 48dg time difference at a 47% retracement. Crude oil got clobbered on Friday, but the important Gann pivot held (see chart below). By late Wednesday it was back to the top of the range and even became a short squeeze candidate moving forward. If that big red bar you see was a regular trading day, it might squeeze the shorts but there probably weren’t too many. 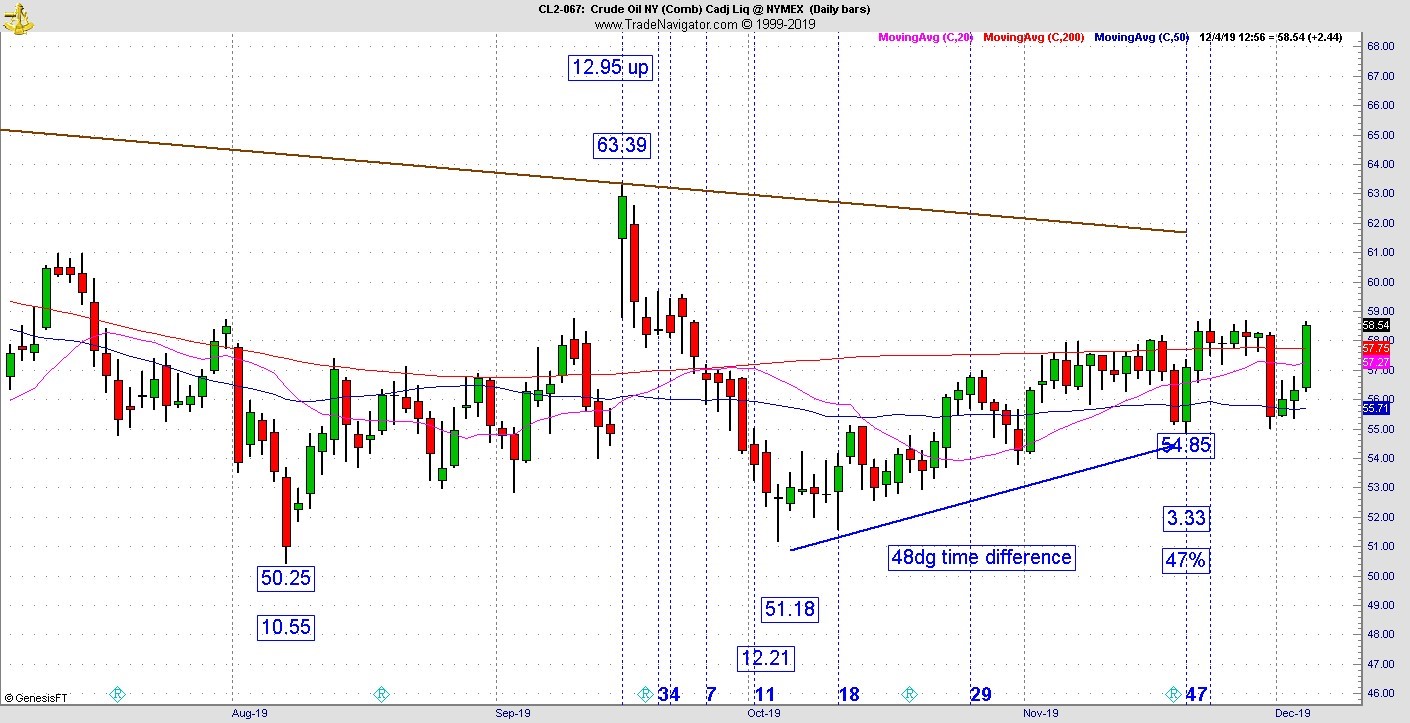 With a strong cycle position at the recent highs, a decent defense forming at the low, stock bulls and bears could slug it out for a few days to see who gets the upper hand. But in the end, the seasonal factor is likely to win out. But if we see crude oil and the SOX turn back down, that will be an indication we could finally be getting something bigger in the opposite direction.