Since the yield curve is positive and the leading indicators are still strong, I don’t expect a recession in 2019 which means I think it’s highly unlikely stocks will fall more than 10% next year, writes Don Kaufman Saturday.

These ISM reports are different from other economic data, but that doesn’t necessarily make them wrong. Either the economy is great, or it is falling from great to good. It depends if you look at the Markit data and the regional Fed reports or if you follow the ISM.

The hard data for August isn’t out yet.

It was the perfect report because prices also fell slightly as they were down 0.6 to 62.8. The PMI slightly beat the 12-month average which is 58.3; it is consistent with GDP growth of 3.5%.

Quotes from the report

It showed 16 out of 17 industries in the composite showed growth in August. The best industries were construction and transportation and warehousing.

Agriculture was the only down industry. An information company said, “Government tariffs are negatively impacting production and recycling sales. Pulp costs have gone up, and that has directly impacted paper for our newspaper production and copy paper. A 10-percent tariff has been placed on aluminum, [which] is used to make production plates. Those used plates are put on the recycling market, which China has put a tariff on. These dynamics have a significant impact on newspaper margins.”

It’s clear from most of the quotes that tariffs are affecting prices, but demand is still strong. It’s interesting to see the effects of tariffs in the non-manufacturing sector.

A real estate, rental, and leasing company stated, “Overall, business has increased. Many factors can be attributed to this increase in demand, [including] the budget and positive outlook on the economy.” It’s interesting to see a company in this industry with positive comments because the real estate market has been showing signs of weakness this summer.

Finally, a retail trade company said, “Solid Q2 results, beating estimates all around. Since we are a services business, the tariffs have little impact [at this point] but are nonetheless a consideration. We do harbor future concerns about the general cost of goods from overseas and the effects on consumer pricing. In the labor market, we have seen a noticeable increase in difficulty to attract and retain talent at all levels. We have begun taking steps to change compensation packages to combat this issue.”

This is all great news as the tariffs haven’t affected business yet and results beat estimates in Q2. The fact that workers are tough to find supports the point that the labor market is close to being full.

The tech and tech related sectors are responsible for all the margin improvements in the past couple of cycles. Global tech earnings are over double the peak of last cycle while firms excluding tech are only back to even. The quarterly services report measures information sector revenue growth. The quarter over quarter revenue growth was 2.6% in Q2. Q1 growth was revised from 1.7% to 1.9%. Year over year revenue growth was 7.0% in Q1 and 8.5% in Q2.

Looking forward to next year

The biggest concern investors have about 2019’s equity performance is how the economy will handle the coming slowdown. 2018 was a year where many countries slowed, but America didn’t because of its fiscal stimulus.

As that wears off and earnings comparisons get tougher, investors are wondering if a correction is coming and if 2019 could have negative returns. The chart below should bring solace to these worries. As you can see, when the economy is growing, the S&P 500 (SPX) has been up 87% of the time.

It’s fair to pencil in positive returns even if economic and earnings growth slows. There’s also a 53% chance of double digit returns during expansions. We’ll probably reach the double digits in 2018, but it’s unlikely in 2019. Only 4% of years with economic growth saw declines of more than 10%. 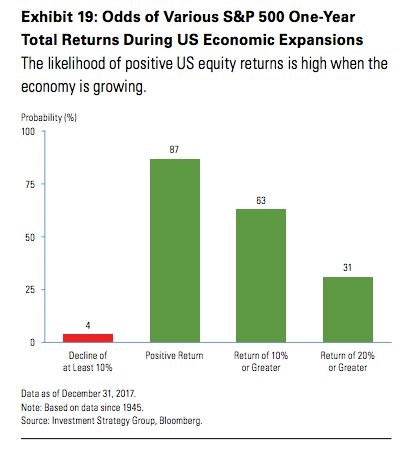 It’s amazing how knowing one aspect about the economy is enough to draw a sweeping conclusion about stocks.

Low risk of a major recession

Since economic growth is driven by the consumer, the long-term health of the consumer is important to where the economy is headed. There’s a popular incorrect assumption that the next recession will be terrible because the economy has been expanding for nine years.

Firstly, there have been years where the expansion was at a snail’s pace.

Secondly, the consumer hasn’t taken out excess leverage which means it’s unlikely that there will be a huge collapse when the next recession occurs.

As you can see from the chart below, U.S. household debt as a percentage of disposable income has fallen about 30% from the peak. The savings rate is 6.7% which indicates the consumer isn’t spending more than it can afford. These stats don’t eliminate the possibility of a recession.

They make it unlikely that there will be a bad one. The low savings rate and high debt to disposable income ratio make it obvious that a massive deleveraging event was coming last cycle. Bulls in 2007 are just like ultra bears in 2018; they are ignoring the data. 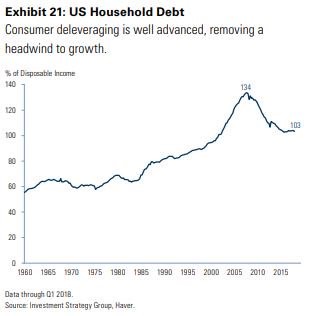