Markets Make a Bottom, but is it THE Bottom?

Gann time window to the rescue? “I do not believe this is the bottom, but it has the potential to be an important low,” notes Jeff Greenblatt.

In my past few posts, I’ve derided most of the business media for telling the public it was time to buy stocks. It had to be a mixture of complacency and incompetence. There was no reason for a low. But now a timeless indicator may very well be coming to the rescue. The longer this thing went on, the closer we got the seasonal change point. For those of you following my work for years will acknowledge nothing goes straight up or down. Financial markets do change direction and no matter the condition, it usually happens close to the change of season.

As far as financial markets are concerned, the March seasonal change point is the most important of the entire year. This is the time Gann stated is the annual reset. Most people believe the stock market year starts on Jan. 1. There is a case to be made given psychology. That being said, the real reset as far as cycle work is concerned, markets are calibrated to the March seasonal change point. Late last week, they started talking about a bailout. Originally, I thought a payroll tax holiday was a pipe dream. Once they started shutting down professional sports and the rest, most people realized we were dealing with a different universe.

By last Thursday, it dawned on me when they decided to go ‘big’ it was likely to line up with the Gann master seasonal change point. That was the event that could trigger a near term bottom. For the moment, let’s say we do have a bottom. I do not believe this is ‘the’ bottom but it has the potential to be an important low. For those of you following my work through the years, the cycle point seems to have manifested again and the news event in the natural appeared as if by magic.

But we are not out of the woods yet. On Monday the politicos threw the market a curve ball. The Senate was very close to a deal over the weekend but on Monday couldn’t even get a vote to open debate. Want to know what the crowd thinks? It’s more than the court of public opinion. The market didn’t like it and quite frankly, it’s one of the most disgraceful actions I’ve ever seen from American leadership. Not only was it disgraceful, it’s downright dangerous. To have Congress dithering while tens of millions of people are wondering how they are going to pay the rent next week is a recipe for complete disaster. Thankfully by Wednesday morning a deal was reached in the Senate but as of this writing the House had yet to vote.

But we woke up Tuesday and it appeared someone flipped a switch. Trump said he didn’t want the cure to be worse than the problem. It might be overly optimistic to consider reopening the country for business by Easter but at least there is a change in sentiment. Just so you know, all of this is materializing right on the most important seasonal cycle point for the entire year.

Below is a chart of the weekly Nasdaq 100, which has an interesting square of nine reading to go along with the Gann cycle point. 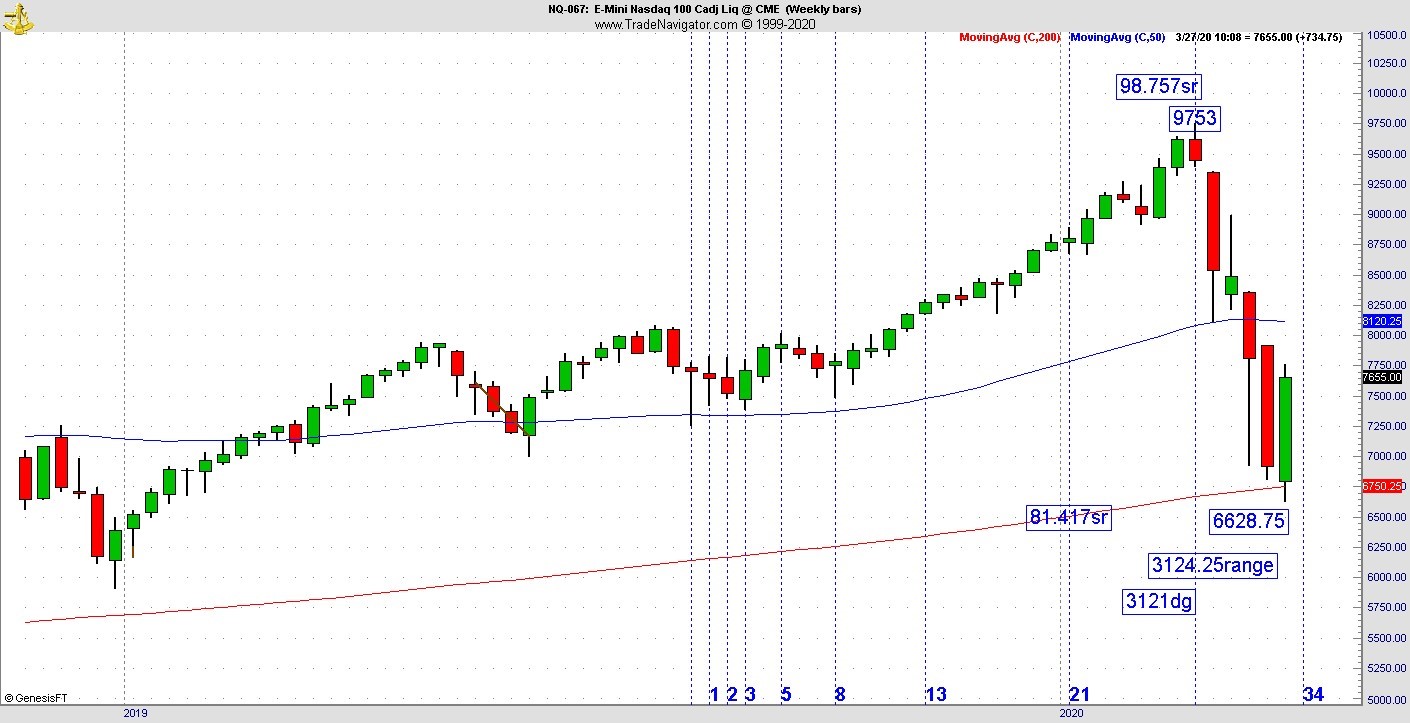 In terms of the range, it’s down to the 200-week moving average at a range of 3124.25 points and square of nine reading is 3121dg. By the way, it was one of my students who figured this out. The bottom line is a very interesting reading while defending the very important 200-week moving average. Of course, I’ve already discussed the oil chart that is in the 610-week window from its high in 2008. An intermediate look shows oil down 76 weeks from the 2018 high at $76.90 (see chart below).

As of this writing, these readings are not just hype, they have potential to turn markets and economies in a new direction. But it comes with a caveat. If for some reason Congress doesn’t get this done, what would be coming, America is totally unprepared for it. That’s all I’m going to say.

So, let’s say it does get done? What does it mean? I’ve been warning if the Fed didn’t start the repo actions in September, the markets would’ve cratered back then. Some laughed, but in the end it was correct. At first, they started with $50 billion a night. How many realize CNBC reported last Friday the Fed started conducting repo action to the tune of $1 trillion a day through the end of the month?

Others have catalogued it so I won’t here but the Fed is now going to bail out the commercial bond market as well as many industries. When the government becomes the buyer of last resort for most paper and starts buying equities, I believe it’s called nationalization. Additionally, the Fed has become the central bank for all the central banks. This is a complete global reset. Some of you erroneously believe when the Fed prints dollars the way they are, it’s going to crash the currency. That would be true except for two conditions. First of all, the U.S. Dollar would be crashing, but other currencies are in worse shape. Many haven’t read The Creature From Jekyll Island. If you do have the book, go to page 185 and read the chapter called The Mandrake Mechanism. On page 187 it states, “It is difficult for Americans to come to grips with the fact that their total money supply is backed up by nothing but debt, and it is even more mind boggling to visualize that, if everyone paid back all that was borrowed, there would be no money left in existence.”

Of course, history has taught us this can’t go on endlessly because the end game is massive inflation. But for right now, if you want to know why the Greenback has been so powerful, this is it. So, if they are able to cut a deal this week, the Fed will end up being the most powerful institution in the history of the world if they weren’t already. I realize this goes against the grain of popular thinking.

What about Gold? It is going higher and while this is not a prediction, I wouldn’t be the least bit surprised if they confiscated the metal the way they did in the last Great Depression. Let’s be clear, what we are dealing with right now can be the equivalent of the Great Depression. So, this is a good news, bad news scenario. The good news is the economy and the markets could be getting relief real soon. The bad news is ultimately the stock market should end up a lot lower.

Is the Bottom in for Apple?
8 hours ago

Lessons of History: A Look Back at Bear Markets
8 hours ago

Roche and Danaher: Two Plays on Testing
8 hours ago

Teledoc: A Trend That's Here to Stay
8 hours ago