View from Toronto: Where to Find Swing Trades in US, Canada This Week 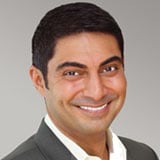 This week we’re on the hunt for swing trades in the Canadian market (within the Energy/Oil & Materials Space), in Currency markets (yen, Aussie), in Commodity markets (Gold, Silver, Copper, Miners) and in Bond markets (TLT, XBB-T), says Ziad Jasani Monday.

The relative strength of U.S. markets make them less valuable for swing traders, however, there are a few sectors that show promise, with Technology in the forefront followed by Small Caps.

View my Market Strategy Session for this week here.

We ended last week with the Global Equity Market (ACWI) down -0.58% on the week as investors and traders were weighed down by geo-political and monetary-policy factors:

And our Trading community questioned whether this was the start of a pullback (-3% to -5%) in markets or just a pause in the Bull Market that “can’t be broken” (yet). We erred on the side of caution, willing to Hold short-to-mid-term long-side positions, but “we bought no further” (some also tried short/inverse over the weekend).

Last week, we evidenced a break-out on Oil (>$73) driven by supply side concerns opening up room for a rally to $75. The USD rose on Powell’s statement coupled with investors selling down the euro as panic struck Italian bonds on a bigger than expected “deficit plan.”

However, with the growth outlook muddied by trade wars the USD remains in a consolidation pattern longer-term (months). Base and Precious Metals struggled as the USD rose even though we saw some signs of life from Silver to end the week.

And the Global Bond Market told us that the yield curve is still more likely to flatten and keep Fixed-Income from walking the plank, again courtesy of a pessimistic global growth outlook.

Investors read Powell’s statement as “too optimistic” on growth and hence hawkish on policy (even though the flight path for rate hikes did not change). Equity traders were scattered looking for stable trends anywhere, but the choppiness made it difficult. It was clear enough to us that taking on more equity risk was not an ideal decision.

The Global Equity Market (ACWI) closed last week in swing-high formation (pointed down) with the Eurozone (FEZ) and Emerging Markets (EEM) closing back below their respective 50-day averages (bearish).

Our swing barometer, the S&P 500, came down to its 20-day moving average and held it (neutral).

Short-term technical indicators suggested momentum was building to the down-side (MACD), yet over-bought-over-sold oscillators did not raise alarm. Volumes traded near averages suggesting the usual 4% of total market capitalization was in attendance.

Volatility (VIX) remained below its 50-day average but in a level of complacency, raising concerns for buyers. The Canadian Market (TSX) sold off to end last week as NAFTA uncertainty grew, yet the Canadian $ bullishly-diverged from equity action. The “low-hanging-fruit” in equity markets was picked off by us on Sept. 7 and shortly thereafter, but the market tree did not “shake-down” enough from Sept. 21 to end last week Sept 28 (Friday) to make for valuable swing-low buying opportunities on the whole. Hence, we remained prudently cautious. 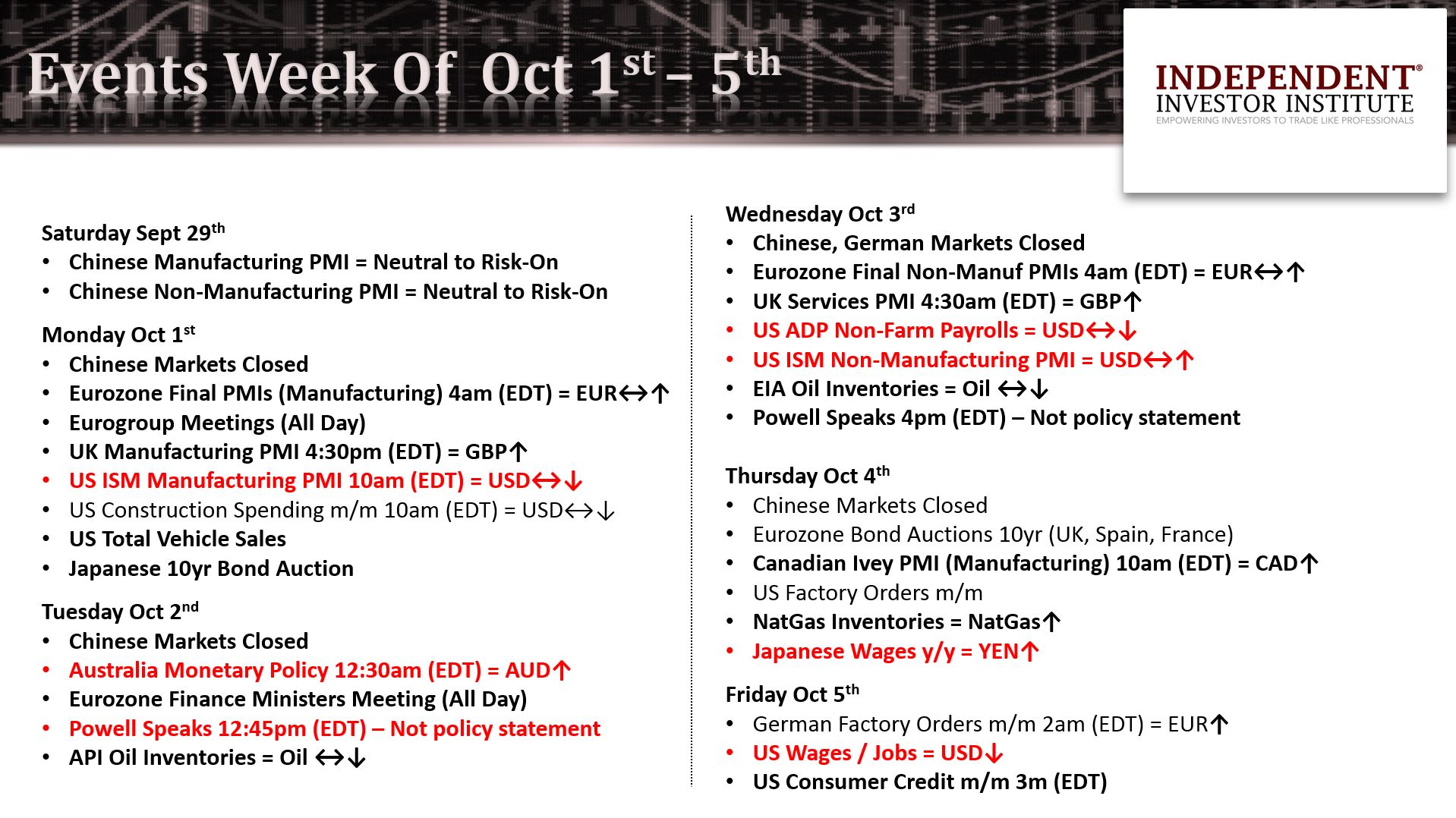 Was last week just a pause in the Bull run and up, up and away we go? Or is this week the start of false-flag risk-on? Oil continues to hold above $73 (currently +0.29% with Brent +0.42%), the USD is toggling flat (EUR/USD flat UUP +0.06%) waiting for this morning’s ISM Manufacturing Data to decide on direction, which in turn is likely to exacerbate or alleviate the pressure in precious and base metals (Gold -0.33%, Silver -1%, Coper -1.3%).

This week we’re on the hunt for swing trades in the Canadian market (within the Energy/Oil & Materials Space), in Currency markets (yen, Aussie), in Commodity markets (Gold, Silver, Copper, Miners) and in Bond markets (TLT, XBB-T).

The event flow for the week does lean to a weaker USD as the week unfolds, and challenges for Oil during inventory releases, along with potential pop higher on the yen (FXY) as Japanese wage data is released and higher for the Aussie (FXA) on monetary policy.