In the financial media, buybacks are emphasized more than they actually affect stocks. It’s way more important to figure out where investors and traders are putting their money than the size of buybacks, writes Don Kaufman Saturday.

Buyback blackouts are when firms can’t buy back stock because they are reporting earnings. If buyback blackouts applied to all companies, they would modestly affect stock action. The blackouts would take away a buyer almost all at once. Since buybacks can act as a floor for stocks, it matters in the short run. However, Goldman Sachs had an internal memo which enlightened me on how unimportant buyback blackouts are.

As the chart below shows, buybacks exploded after the selloff in the stock market in mid-October even though the meat of earnings season is coming up shortly.

The supposed blackout didn’t prevent firms from buying their stock back because a lot of companies are on 10b5-1 plans which allow them to buy back stock during blackout periods. These purchases occur with scales which means they increase as prices fall. This information means if the stock market falls, firms can still take advantage of low prices like they did on Friday.

It’s also worth mentioning many firms stop their buybacks at 3:30 pm which can increase volatility in the last half hour. Keep in mind, that there are record buyback authorizations, so there is some support for stocks. However, if the economy falters and sentiment craters, stocks can still fall.

There haven’t been any American economic reports which justify the stock market correction in October. It’s fair to say the market had run too much and had a normal pullback. The other possibility is weakness from other countries such as China catalyzed the decline. That would be a fair assertion because S&P 500 (SPX) firms garner 38% of their revenues from international markets, but it’s inconsistent with the underperformance of small caps.

While the global economy is slowing, it doesn’t make sense for the Russell 2000 (RUT) to crater more than the S&P 500 if traders are selling stocks because of global growth worries.

I have discussed how individual firms to try to get a grasp on the overall economy. PPG Industries (PPG) and Fluor (FLR) pre-announced their results and Fastenal (FAST) reported their full Q3 results. They all cratered on global growth and tariff fears. PPG and Fluor issued downside guidance, but Fastenal actually beat estimates. A major fear is how tariffs will affect costs.

In the past couple of months, I have been shocked at how stocks have rallied even though the trade war with China is getting worse. There is even an ultimatum in place which states America will raise its tariff rate on Chinese goods to 25% by the beginning of 2019 if there isn’t a deal. This likely means China would need to respect American intellectual property more and open up its markets for American firms to do business in.

With earnings being released at rapid-fire speeds, I think it’s fair to review each one as they come in. You can’t form your entire global macroeconomic and stock market opinion based on three industrial firms’ reports. Now that last week is over, we can look the Q3 results so far before the meat of earnings season begins next week.

When I previously reviewed Q3 S&P 500 results, revenue growth was near Q2 growth. The latest reports changed this as revenue growth is now only at 7.73% which is down from 9.45% in Q2. 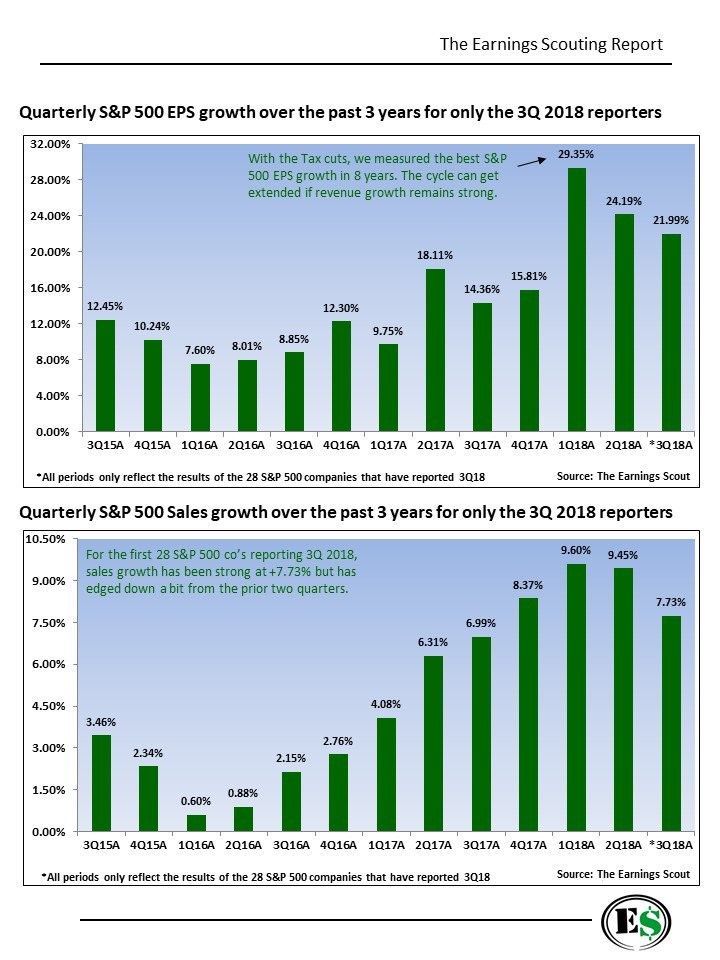 With Q3 results still not close to being finished, some investors are still focused on the current quarter. Others are already looking at how Q3 results affect Q4 estimates.

It’s all about guidance. I like to look at everything, but recognize that guidance determines where stocks are headed. As you can see from the table below, the estimates for Q3 earnings growth have fallen from 21.26% on October 1 to 21.21% on October 12. Usually, the bar is lowered so firms beat estimates.

I’d expect growth to be about 2%-3% above where it started on October 1 based on historical averages. While the decline so far disappointing, the steady estimates for Q4 earnings growth are encouraging.

As you can see, growth was expected to be 15.37% on October 1 and it’s now expected to be 15.26%. Generally, estimates fall as the quarter gets closer, so I’d expect estimates to get closer to 10% by the time reporting season is underway in about 2.5 months.

The takeaway here is that although a few global industrial stocks look bad, earnings season doesn’t support the thesis that a bear market is coming soon.

Don’t be swept away by the volatility and negative momentum. Earnings estimates support the bull market lasting at least a few months longer. I’m not concerned by this correction because I had been expecting one for a few months especially since the new Chinese tariffs were enacted.

Don’t worry about the buyback blackout period because firms are still buying back stocks automatically when they fall. Q3 earnings season hasn’t been as good as the last two quarters, but it’s still early. So far, the stability of Q4 earnings estimates shows us that this won’t be the beginning of a bear market.

Stocks can be volatile, and even fall more than 10% but the trend is intact regardless of whether the major indexes have fallen below their 200 day moving averages. I was a seller of the rip and now I’m a buyer of the dip.