The jobless claims report showed claims fell from 215,000 to 210,000 which is close to the cycle low. The 4-week moving average increased from 209,750 to 211,750. The big story from this report is there wasn’t an effect from Hurricane Michael, writes Don Kaufman.

Claims in Florida fell 600 to 6,400. Based on the disaster the hurricane caused, I expect claims to increase in the next report. There was a delayed bump in claims after Hurricane Florence. That was a temporary effect which has subsided as the claims in the Carolinas fell sharply this week.

Continuing claims fell 13,000 to 1.640 million; the 4-week moving average fell 1,250 to 1.653 million. Both are at a 45- year low. The unemployment rate for insured workers fell to 1.2%. The survey for the monthly BLS jobs report occurs in the third week of the month which is next week’s jobless claims report.

Furthermore, the delivery times index fell from 11.1 to 0.2. In the past few reports, the price indexes have fallen. You would think the supply chain improving would cause them to fall further, but they were mixed. Prices paid fell from 39.6 to 38.2. Prices received increased from 19.6 to 24.1. 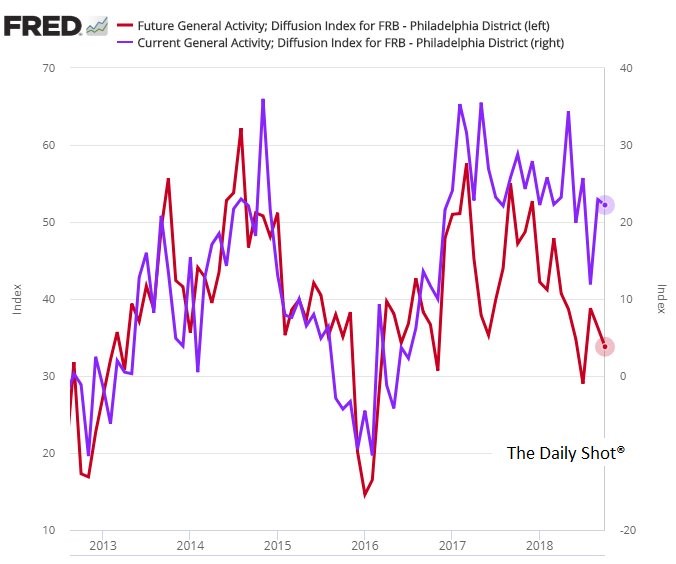 The chart shows the 6-month future expectations fell slightly from 36.3 to 33.8. Keep in mind, the future index uses the left scale. The scaling makes it look like they have recently diverged, but they are often far apart. Sometimes they move in the same direction and sometimes they don’t.

Month over month home sales were down 3.4% which is on top of last month’s decline of 0.2%. You can tell by that two-month decline that year over year sales were also down. They fell 4.1% after falling 1.7% in August. The last time existing home sales fell 4% was in 2007.

That’s not a guarantee another housing decline is about to occur, but the homebuilder stocks are also signaling the market is about to falter. The homebuilders index is at a 21-month low, is down 21 out of the past 23 trading days, and is down 29% from its January high.

The table below breaks down sales in each price range and region. The sales for houses under $100,000 are down 18.3% and are now only 8.6% of the housing market. As housing prices increase, there won’t be many houses below $100,000 besides tiny homes.

The important point to realize is overall sales fell in every price category. When sales decline, it becomes a buyers’ market which leads to falling prices. Year over year price growth in Raleigh peaked at 9.25% in Q2 2017; in Q2 2018 growth fell to 6.23%. 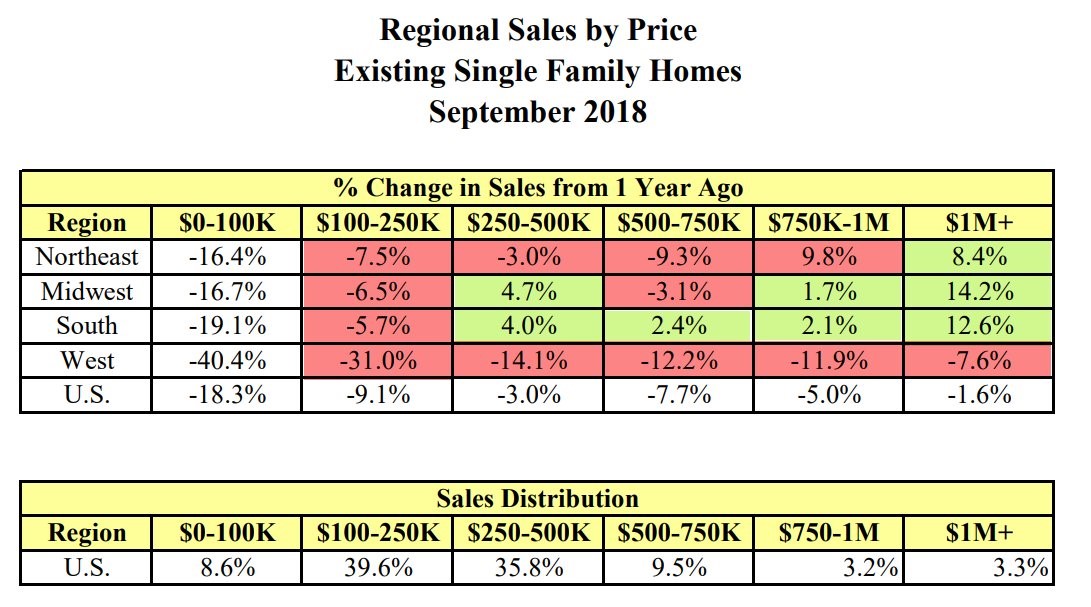 Median existing home prices were down 2.8% month over month to $258,100 and up 4.2% year over year. The decline in sales suggests that price growth will fall.

The number of resales on the market fell 1.6% to 1.88 million. Since sales fell sharply, supply on the market improved from 4.3 months to 4.4 months.

As you can see from the chart below, the national supplies troughed at 3.2 months in late 2017. I don’t think the weakness this year is being caused by supply limitations. The inability to build multi-family houses in the city because of regulations has boosted housing prices in cities. The 30-year interest rate on home loans has increased to 5% which has spurred consumers to claim housing is the most unaffordable since the peak in 2007. 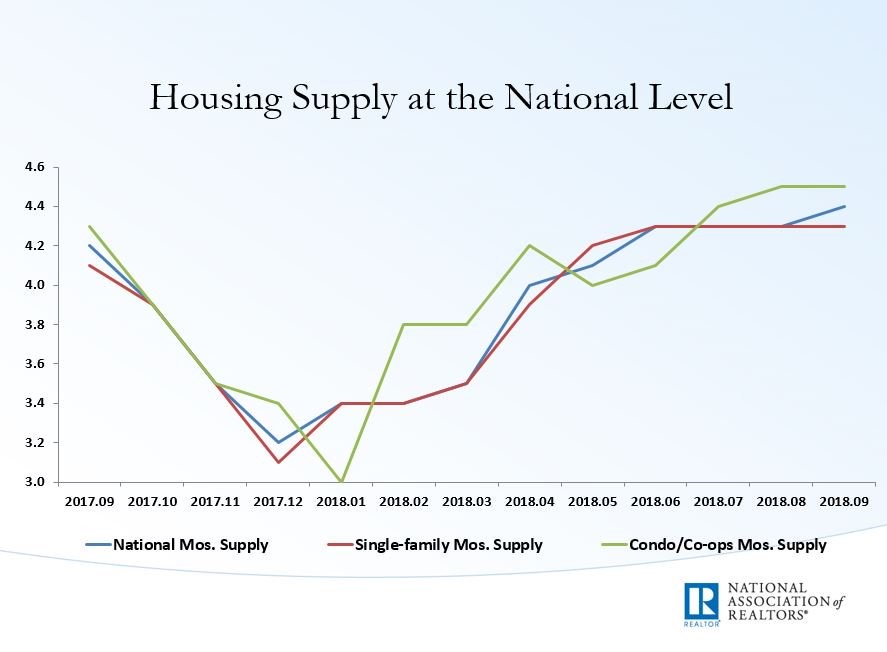 The housing market is showing signs of topping. The weakness in existing sales and the collapse in housing stocks shows year over year price growth can’t continue at 4.2% for much longer.

There won’t be a housing bust like last cycle, but housing prices can fall especially if interest rates continue to rise. The Fed is hiking rates until they break something. The housing market could be the first thing to break.