The major large-cap U.S. indexes continue to hit new highs but market leadership has again become concentrated in November, with smaller company stocks and foreign stocks still lagging. This is not necessarily worrisome but does argue in favor of continuing to emphasize large-cap U.S. equity exchange traded funds (ETFs) such as the S&P 500 SPDR (SPY) rather than trying to squeeze out some extra potential gains in small or mid-cap ETFs. The bond market continues to ratify the stock market advance in a lukewarm manner, with 10-year Treasury note yields pulling back to 1.8% over the past two weeks but still higher for the month so far.

The chart below shows how SPY is climbing its upper Bollinger band to new highs, confirmed by MACD and, barely, by the advance-decline line. Nothing to worry about here. If there is a retracement, the 302-304 area should be a support zone, recommended for bottom fishing. 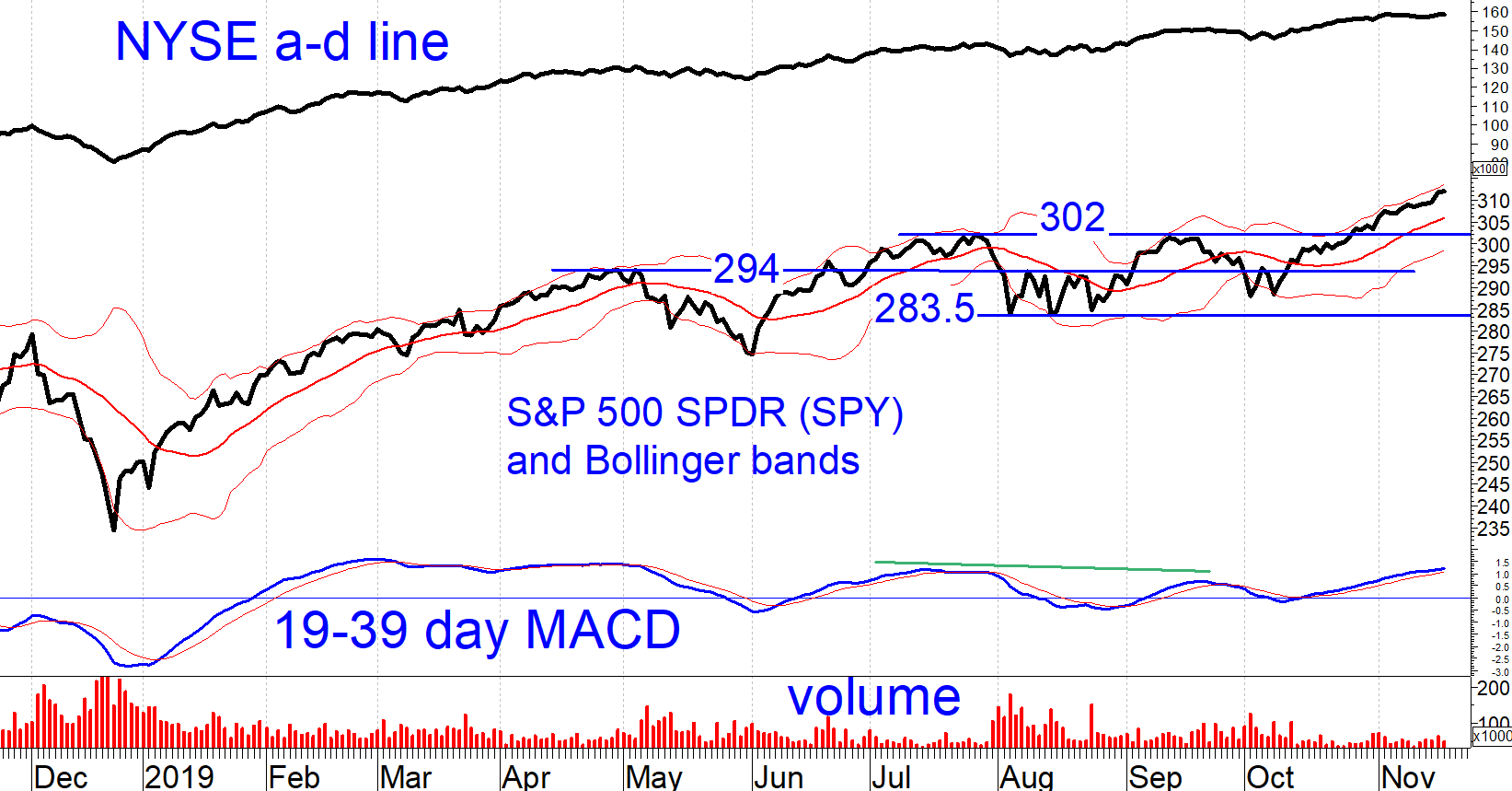 In my last article I showed a chart of the SPDR S&P MidCap 400 ETF (MDY), showing that it still lay slightly below its September 2018 high even though the S&P 500 has made new records. Small caps are in a similar situation. The chart below of the iShares Russell 2000 Index ETF (IWM) shows that in November, IWM has moved mostly sideways, not higher as the SPY has. The IWM/IWB ratio tracks the relative performance of small-caps versus large-caps. The IWM chart shows that this ratio has fallen notably in November, indicating that small-caps have resumed their 17-month trend of lagging large-caps.

Nonetheless, the chart of IWM is neutral, not bearish. MACD confirmed the most recent rally in IWM. IWM itself remains in a sideways trend dating back to late February, in contrast to the SPY (above) that shows the recent breakout in SPY. 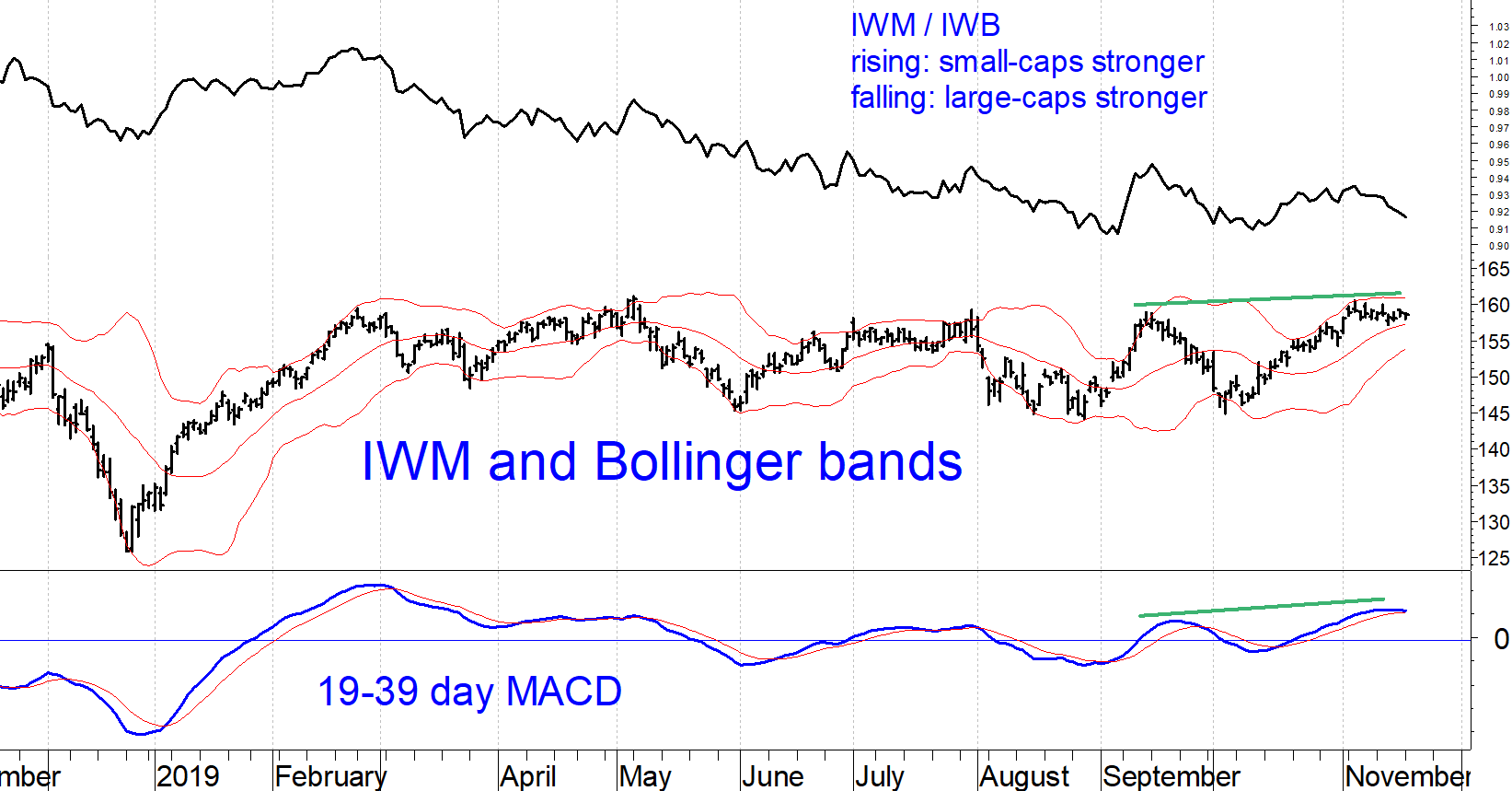 Defensive and interest-sensitive areas lose ground in November but continue their long-term outperformance.

Trends over the past 21 months have favored defensive and interest rate-sensitive sectors over the S&P 500. These sectors include Consumer Staples Select Sector SPDR Fund (XLP), Utilities Select Sector SPDR Fund (XLU) and iShares US Real Estate ETF (IYR). However, in November these defensive areas lagged the S&P 500. It is too soon to say whether the recent shift away from defensive sectors is the start of a long-term trend. If it is, that would be part of a bullish environment.

The chart of FXI and SPY below shows how flare-ups in the trade war have had a greater negative impact on Chinese equities (FXI) than on U.S. equities (SPY). Each of the past three retracements in FXI saw the FXI ratio decline, meaning that FXI fell more than SPY. These are circled in the price and FXI / SPY ratio charts below. This month, the FXI/SPY ratio hit a low, reversing the gradual recovery in the relative strength of FXI in August through early November. The decline in Chinese equities has dragged down the iShares MSCI Emerging Markets Index ETF (EEM), more than half of which is in east Asian equities (China, Taiwan, South Korea). However, U.S. markets have shrugged off this month’s tremors, the on-again, off-again prospects for a “mini-deal.”

I am not optimistic for an improvement in U.S.-China trade. Rather, I see our choices as either resigning ourselves to continued Chinese trade abuses or pursuing an orderly separation over the coming several years it will take to develop new supply chains. The good news is that trade issues seem to have lost their grip on the markets. 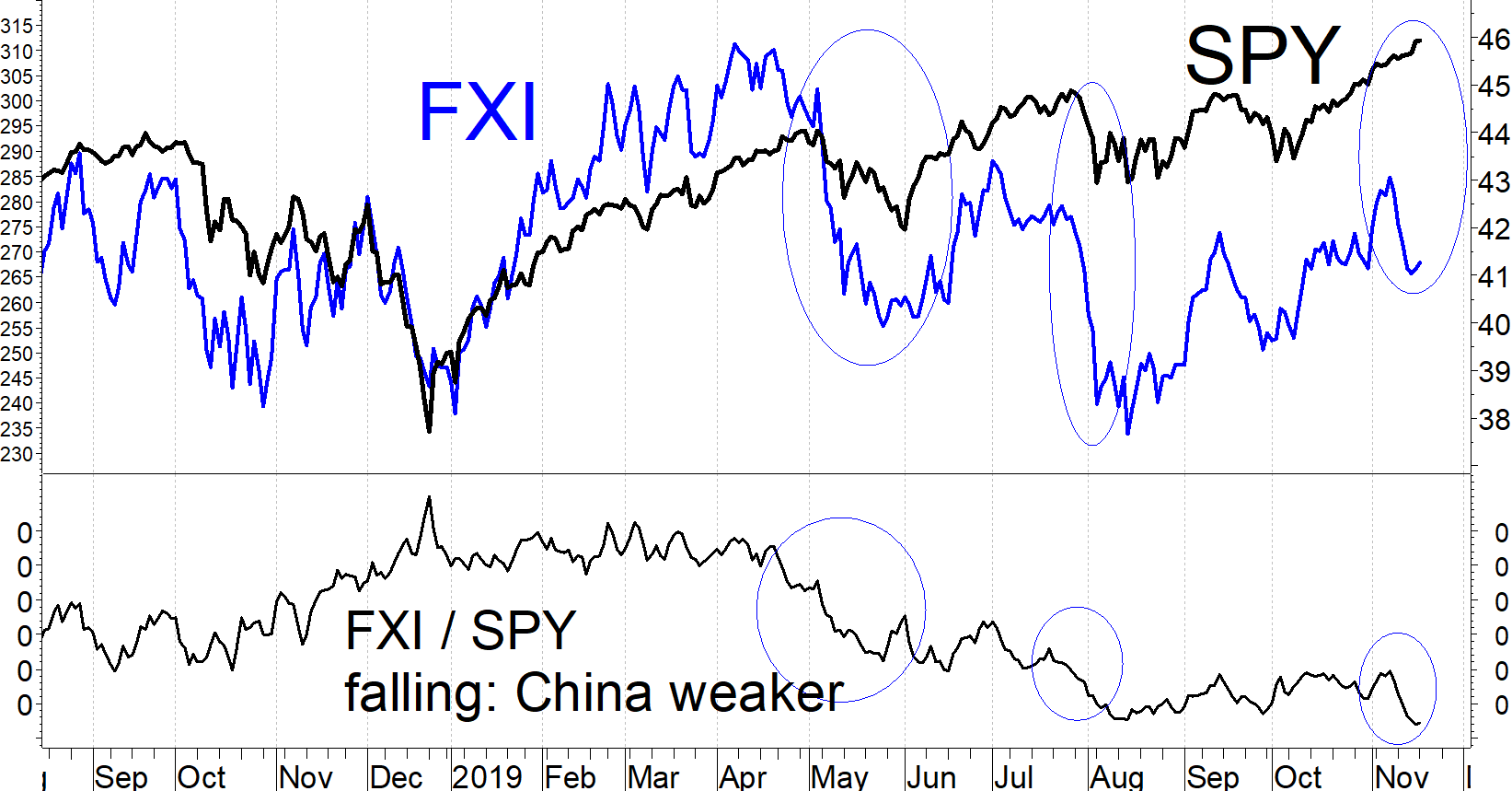