Is a Melt-up Style Breakout Under Way?

What do I mean by a market “melt-up?” Think of a melting candle. Drip, drip, drip. It is a very slow process that doesn’t seem like much at first, but over time the candle will be fully consumed, says Steve Reitmeister, editor of Reitmeister Total Return.

The last few weeks have been beset with wild sector rotation. That is still at play. However, another trend may also be emerging that deserves some conversation. That is the notion of a market "melt-up".

What is that? And what does it mean for our trading strategy? I will answer that and more in this week's commentary. 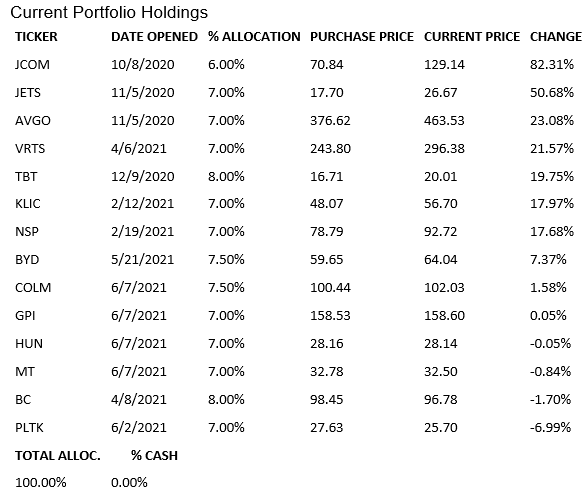 Now let’s translate that to the stock market. Instead of melting down...it melts up by little drips and drabs. Almost imperceptible at first having you doubt that a breakout has occurred. And then one day you wake up and see the market is pressing 4,300 and indeed the breakout above 4,200 was already in full swing.

One of the other hallmarks of a melt-up market is that it never really goes down by any great amount. Plus, its gains accrue at such a slow pace you don’t really see it happening until potentially it’s too late.

Now with that in mind, here are the closing prices on the S&P 500 the past eight sessions:

That drop to 4,192 a few sessions back is no doubt lingering in many people’s minds to have them question the very real possibility that the break above 4,200 has already taken place. Indeed, I was getting caught up with all the sector rotation games, which originally prevented me from seeing that indeed a breakout is likely unfolding.

And that increased likelihood is what had me jump back to 100% invested Monday with a slate of fresh trades. Because I think the odds of the melt-up style breakout is under way and thus wanted to be fully loaded with attractive stocks.

On the economic front, there was some quality bullish fuel being served up. That starts last Thursday with ISM Services coming in at 64 which is nicely above the 62.7 from the previous report. There is just shockingly no letup in the strength of this report. Ditto for its cousin, ISM Manufacturing.

On the jobs front, we first saw an impressive 978,000 jobs added in the ADP Employment report for May. That was more than 60% above estimates.

However, investors focus more on the Government version of the report, which came out Friday showing 559,000 jobs added. Still impressive...just not as splendiferous.

Most interesting of that Government data set was the decline of the unemployment rate from 6.1% to 5.8%. Rarely will you see that big of a move in just one month’s time. Thus, it tells you how quickly the economy is getting back on track.

Then today was a curious showing for the NFIB Small Business Optimism index. It slipped modestly from 99.8 to 99.6. This was strange after 3 straight months of marked improvements.

Because small business owners are complaining about labor shortages. Meaning they DEMAND to hire a lot more people...but there is not enough skilled labor to go around.

This is good and bad.

The good part is that the employment rate should continue dropping and that means more income and spending by consumers and businesses alike to lift the economy. The bad part is that if there is a labor shortage then you will have to spend more to hire the right talent to your firm.

This is called “wage inflation”. Which is a more permanent type of inflation versus much of the “transitory” inflation that seems to be floating around today. We need to keep an eye on this given how rising inflation would put a cramp into the markets long run potential.

For now the bull argument far outweighs the bear argument. And thus, we press forward with a fully loaded portfolio of attractive stocks and ETFs. More on that below.

As suspected, the sector rotation would likely turn our way. Indeed, it did, leading to two solid sessions of outperformance including a +0.87% gain today when the S&P hovered around breakeven.

After that, read on below for some additional insights on our individual picks:

4 Fresh Picks from Yesterday (COLM, GPI, HUN, MT): We are enjoying a solid second session with our new trades. GPI and COLM were especially strong. However, no trend can be trusted in this swirling market environment. So truly anything could happen in the days that follow.

What I am more confident in saying is that I think each of these 4 stocks (and recently added Playtika for that matter) has a great shot to outperform the market over the next 1-3 months. If you can keep your gaze on that steadier horizon, then all the easier to stomach the day to day volatility.

Virtus Investment Partners (VRTS): Shares took their first shot at $300 last week. As was to be expected, shares found some resistance there with a modest pullback since. As often is the case, the stock may need a 2nd or 3rd attempt to break through resistance at this level. But once above, I would not be surprised if it sprinted to $320-330 in short order. Keep a firm grip on these shares for the upside that should follow.

Higher Interest Rate Trades (TBT): Friday was a funny day for this trade. The jobs report was good...but not so good to make people believe the Fed will allow rates to rise anytime soon. As such, bond rates headed lower as did these two positions.

However, I believe this is the wrong read of the data. Often, the Government report is an early estimate that needs to be greatly revised. In this case, seeing the better #s from ADP’s version of the report plus the continued drop in weekly claims...then I believe we are not that far away from the Fed agreeing to lower the $120 billion bond buying program. That would be a clear step 1 in the process to let rates rise. That could come as soon as the mid-June meeting or perhaps even late July.

The point is that I still very much believe in the concept of higher rates. And I have jokingly said that if I am wrong about this, then I will hand back my BA in Economics to the University of Wisconsin. Truly the only thing that I believe that stops the higher rate train over the next couple years is another recession creeping in. Very few reasons at this moment to expect that, once again, pointing to MUCH higher odds of higher rates in the future with gains flowing into TBT shares.

Broadcom (AVGO): We talked about the earnings beat in Friday’s week-end commentary. This was a solid beat and raise with lots of good things flowing since. First, is upward earnings estimate revisions because analysts see more growth ahead. Second, is higher target prices with a new average of $541 with street high of $580 from the 5-Star analyst at Merrill Lynch. Lastly, price action has been positive since the announcement. I suspect it won’t be long til we are knocking on the door of $500. And just like VRTS, it may find resistance there for a short while. Yet with all these positive catalysts in play, then should blast above $500 soon enough.

Kulicke & Soffa (KLIC): Hate the high beta when tech shares are taking a beating. LOVE the higher beta when the tailwinds push the group higher. This see-saw for KLIC has happened already a few times. Gladly, patience has shown the virtue of staying in shares. And like the odds that coming into next earnings we are finally pushing above $60 with a serious shot at $70.

US Global Jets ETF (JETS): A great spot to see the trends in airline travel is the TSA site where they count the # of folks who go through their airport checkpoints. Yes, travel is still down 33% from the 2019 levels. But on the other hand, it is 4X higher than it was a year ago. So, the trend is clearly improving with a bit more upside to go. Given the likelihood of getting back closer to normal in the next couple years tells you why we continue to hold onto shares with strong expectations of more outperformance to follow.

J2 Global (JCOM): JCOM was battling back and forth with KRE for the top spot on the RTR leader board. But now that we took profits on KRE then these shares don’t have much competition. Gladly, shares are not relaxing in this new environment as they keep pressing higher with another shot to break above $130. Given that the average target is $163 then, I truly believe our joy ride in these shares is far from over.

This is an exciting time for the portfolio as we close in on mid-year. We have solidly outperformed to date. Plus, we have infused some fresh positions into the portfolio packed with the goodness of the POWR Ratings to put the odds firmly in our favor.

No, it won’t always be rainbows and lollipops with this portfolio. The 2021 market will have too much volatility to allow that smooth of a ride. However, if we hold firm to the fundamental outlook for the market and the unique merits of our individual positions, we should end the year firmly ahead of where we are now.